Choosing Her Own Adventure 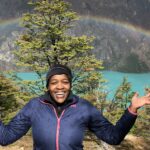 Halfway through her senior year at UMBC, Naomi Mburu M26, ’18, chemical engineering, was named the very first Rhodes Scholar in university history. So, following Commencement, she packed her bags and—after squeezing in a summer trip to Kenya—headed for jolly old England to make her mark on Oxford, the oldest English-speaking university in the world. Today, more than 3,500 miles from home in her pursuit of a doctorate in nuclear fusion, Mburu writes to share her thoughts on her first year at Oxford, and the ways she’s making herself right at home.

Roughly a year and a half ago, I received one of the biggest surprises I have ever received: the opportunity to attend the University of Oxford in England. As someone who has lived and attended elementary, middle, and high school all within 15 minutes of UMBC, I was itching to see the broader world and what it had to offer. Now, I have been living in Oxford for a little over six months and wanted to share some experiences and observations with my UMBC community.

There have been several wonderful and difficult moments woven throughout my experience thus far. Meeting hundreds of other Rhodes Scholars has been one of the most wonderful aspects of this experience, as the scholars come from many corners of the world and each have such interesting experiences and perspectives on life. Some of the moments I most enjoy at Oxford involve exchanging life stories with my fellow “Rhodies” and hearing my classmates passionately talk about topics that are close to their hearts.

Having the Rhodes community around me has definitely helped ease my adjustment to English life, but there have still been many times when I felt the loneliness of leaving home and starting off alone in a new country. I found that close community and friendship can sometime take quite a bit of time, patience, and effort to create, and maintaining old friendships across time zones can be a difficult thing to juggle. Luckily, there is so much fantastic technology like WhatsApp and FaceTime that allow me to easily connect with family and friends back home, and my family was able to visit me in April. There have also been some unexpected differences that I am learning to adjust to, the main being the weather and the sun setting at 3 p.m. in the winter.

One of the biggest surprises of Oxford has been the structure of the Ph.D. compared to universities in America. For starters, here the Ph.D. is instead called the D.Phil., and in my department the D.Phil. process solely consists of an in-depth research project conducted over 3-4 years. There are no class or teaching requirements; the only responsibility is conducting research. This was quite a shift from my time at UMBC where I found myself balancing a full, pre-determined chemical engineering course load along with extracurriculars, teaching, and research. This has given me the chance to spend my first few months at Oxford really diving into my new field of nuclear fusion and thinking critically about what I want to get out of my Ph.D.

The increased freedom does come with added responsibility, however—students must decide for themselves what they want their D.Phil. experience to look like and proactively seek out those opportunities. Coming from a more structured undergraduate experience, this freedom was initially quite intimidating. However, I have seen how the flexibility of this new schedule has afforded me lots of time to try new things, travel, ponder, and simply do things that make me happy. Oxford has lots of great spots where I go to relax, read, or think, such as Christ Church Meadow, a beautiful field complete with cows which runs along the Thames River, or any of the beautiful college gardens.

Oxford and the Rhodes community are bursting with opportunities for students to “choose their own adventure.” The Rhodes House has been a central part of my experience thus far, as it serves as a meeting place for scholars past and present to plan events, study, and hang out. I have attended many scholar-led talks, musical performances, and even a mindfulness course there. The house also serves as the location for the annual Rhodes Retreat, which is a unique chance to spend a few days reflecting and discussing deep issues of life and purpose with your cohort.

Eating an American-style Thanksgiving together in Milner Hall of the Rhodes House.

In November, I helped organize an American Thanksgiving dinner for 130 people in the Rhodes House with a diverse team of people, some of whom had never experienced this type of holiday celebration. We had mashed potatoes, macaroni and cheese, stuffing, sweet potato casserole, homemade bread, turkey, a vegan option prepared by a scholar from Israel, and one of the Jamaican scholars even made jerk sauce for the turkey! Every year, the Rhodes House also sponsors scholar trips to places like Israel, China, Palestine, and Chile. I attended the Chile trip in March, where I joined a group of 11 other scholars on a nine-day backpacking expedition through Patagonia National Park.

Outside of the Rhodes House, I have attended talks at Oxford ranging from brain surgery to the evolution of language, tried new sports like rowing, and engaged in ancient traditions such as attending formal hall in the Harry Potter-style dining halls where we wear a mandatory black gown and stand for a formal Latin grace before the meal. And in March, the university supported me to attend a fusion-focused, week-long program that involved operating the world’s oldest functioning nuclear fusion reactor, located in Prague, Czech Republic, which was a great chance to meet other students in Europe interested in fusion and gain some hands-on experience with a fusion reactor.

Overall, my time at Oxford has been full of experiences that are continuing to shape the way I view the world and use my time. I look forward to all of the adventures the next year has in store!

Header image: Mburu finds the end of the rainbow during a Rhodes trip to Chile, which included a backpacking expedition through Patagonia National Park. All images courtesy of the author.