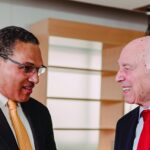 In 1989, Baltimore philanthropist Robert E. Meyerhoff sat down with then-UMBC vice provost Freeman Hrabowski with a bold vision for the University—to create a program that would offer high-achieving African American men a doorway into STEM scholarship at the highest levels. Thirty years later, the Meyerhoff Scholars Program is a national leader on the forefront of efforts to increase diversity among future leaders—both women and men—in science, engineering, and related fields. Because of that, UMBC is also the leading producer nationally of African American undergraduates who go on to earn M.D./Ph.D. degrees.

This spring, as the program celebrates its 30th anniversary with its more than 1,100 alumni worldwide, Meyerhoff and Hrabowski sat down again to discuss the impact of what they started. This is an edited excerpt of that conversation.

Bob Embry of the Abell Foundation called me and he said, “Bob Meyerhoff has an interest in talking to you.” And when I got to you, it was like a marriage made in heaven, because all you did, the whole time, was ask me questions. You were trying to understand the problems, and the issues, and you did tell me, I will never forget it, that you truly believed that if children were given the same opportunities as your children, with the same support, they would do just as well. They would do quite well. And that’s how we got started.

Meyerhoff: And, there’s no question about it, that I was impressed right from the beginning with the first class. the students you had … were really impressive….And almost every year, they are more impressive.

Hrabowski: And let me just say, the fact that [the] Howard Hughes [Medical Institute] has put so much money into replicating the program at other places, and that the Chan Zuckerberg Initiative is just starting this process out in California, replicating the program, says a lot. The most important thing is…you have to have people who really care, and as you said at the beginning, who believe these young people can do it. And then we have to be clear about those expectations…And then we have to evaluate and be honest about what works and what doesn’t work. That makes the difference.

Meyerhoff: I’m so proud. I mean, if I wasn’t proud of them, I wouldn’t like the idea they call themselves Meyerhoffs. It’s complimentary to me that they’re called Meyerhoffs. I mean, they’re all much more educated in science than I am, and they have accomplished much more in science and engineering than I have or ever could. So I’m so very proud of the fact that they are where they are. They’re just so outstanding, and they’re just proving day after day after day how successful the program is.

Hrabowski: That’s right. And you have been a pioneer in being a visionary for this program, and these students are pioneers, because many have become the first African American, for example, or the first woman to complete these degrees. And once the first does it, then other people say, “I want to be like that.”

Hrabowski: “And I want to do that.” And that’s for every race in the program, for every possible group, they have been leading and showing other kids that it can be done…

You know when I think about it, this 30th anniversary, Bob, represents two things. Number one, your belief in the dream. The dream that these young people could excel. And number two, the magical notion that this is a time that we celebrate dreams realized. These are dreams realized, when you look out and you see hundreds of young people who are now serving society as scientists, and engineers, and physicians, we can’t help but think dreams realized. We continue to hold fast to dreams.

For more information about the Meyerhoff Scholars Program and the 30th Anniversary Celebration, visit meyerhoff.umbc.edu.