Hitting All the Right Notes 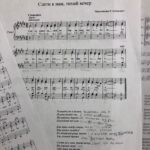 In the corner of the Performing Arts building, a haunting melody rises up in goosebump-inducing refrain and is suddenly interrupted by a quick stamping foot and an insistent correction. In a gruff but kind voice, the director of UMBC’s Russian Chorus rectifies the soloist’s rolled “r”s and the group immediately begins singing again, at ease with the complex syllables of the Russian ballad, even though some of them speak no Russian outside of this hour long course twice a week.

The chorus is one of only three like it in the whole country. Yale and the University of Chicago also boast ensembles, making UMBC’s group something of an anomaly. At the heart of the choir is the director: Slava Liberman, a formally trained choral director from Belarus who moved to Maryland with his family in the early 1990s. His passion for the folk traditions in Russian classical music has not faded in the two decades directing at UMBC; and his current group of students and alumni performers are enthralled with the world of Russian music to which Liberman holds the key.

“I love working with Slava,” says junior Felicia Jones, modern languages and linguistics. “He is the first chorus instructor I have ever had that is so passionate about what he does. He gives me a clear idea of how he wants things sung, and he always will make time for me if I feel that I need extra time to work on a certain song.”

Vira Zhdanovych, the Russian Club advisor, instructor of Russian, and herself an accomplished mezzo-soprano, sees the chorus as a compelling aspect of the Russian community on campus. Often, she says, her students need to be encouraged with a little extra credit to begin participating, but once Liberman connects them to these historic songs, they keep coming back—even as alumni.

“The chorus was an amazing way to learn a language through experience,” says Logan Dean ’17, political science and social work, who joined the group in 2017 while in Russian 101. Currently a financial aid counselor at UMBC, Dean says that Liberman is the reason he spends his lunch breaks returning to sing songs like Katyusha, The Long Road, and Moscow Nights.

“There is something about seeing someone so passionate about something, it just really motivates you,” Dean says. “He regularly tells us to stop laughing at him when he’s stomping his feet and shouting in Russian, but all his actions happen because he has a vision for us and for the music and it gives him this intense energy about directing.”

Liberman says he plans on continuing the Russian Chorus until he’s no longer able or allowed. He turns to a poetic Russian phrase to describe its effect on the students and campus alike: “Луч света в тёмном царстве,” which translates as “the brightest light in the darkest kingdom.” Watching his American students overcome linguistic barriers, learn to sing Russian vowels, or fall in love with folk music of the 20th century is a moment of watching that light shine. “For me, it’s a big privilege to work with these American students. Each time when I hear they are doing better, it’s like a victory.”

“I think everyone should find their version of Russian Chorus,” says Dean. “Something weird and maybe unusual that they enjoy. It makes life more interesting and opens doors to new things that you may have never experienced otherwise.”