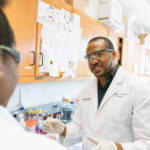 Angelique Johnson is a co-founder and CEO of MEMStim, a company that produces implantable electronics to treat brain disorders.

Isaac Kinde is the chief scientific officer at PapGene, Inc., a company that sells molecular tests meant to detect cancer early. He is also a recognized national expert in molecular cancer diagnostics.

All three graduated from the Meyerhoff Scholars Program. The program was co-founded by Robert Meyerhoff, a Baltimore philanthropist, and University of Maryland, Baltimore County President Freeman Hrabowski in 1988 with the goal of increasing representation of minority students in science, technology, engineering and mathematics programs at UMBC.

Since then, about 1,500 students have gone through the program and pursued careers that range from public health practitioners to entrepreneurs. Many alumni are professors. 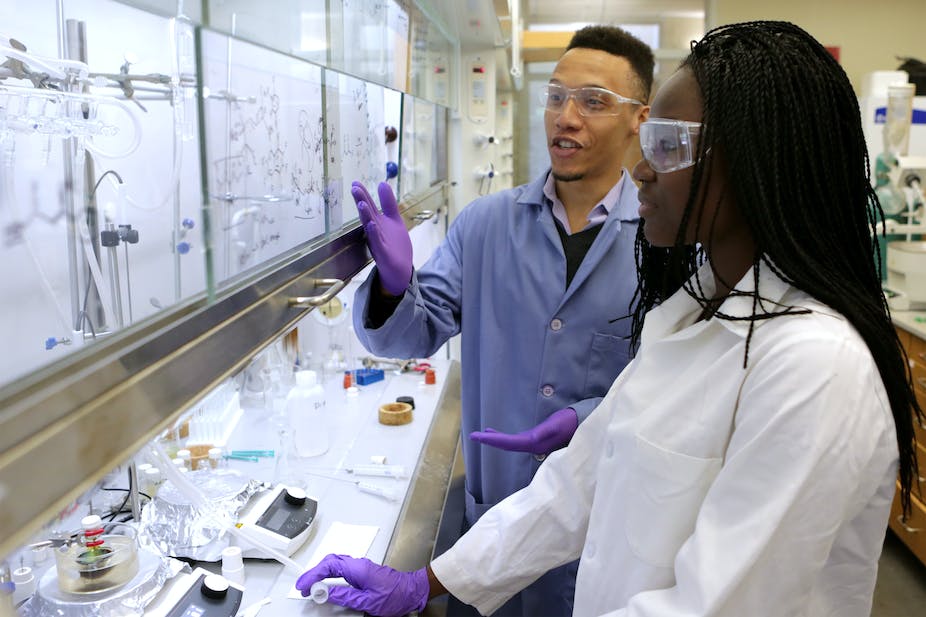 Assistant professor of chemistry Sidney Wilkerson-Hill, left, in a chemistry lab at the University of North Carolina at Chapel Hill, with Bolatito Babatunde, a student in the Chancellor’s Science Scholars program at UNC. Lars Sahl / UNC Chemistry, CC BY

What makes the Meyerhoff work?

The Meyerhoff Scholars program has been called the “gold standard” for providing a path into STEM research for African Americans, Hispanics, and economically disadvantaged white students who are underrepresented in the field. It has also been credited with changing the culture of the campus at UMBC.

Based on the success of the Meyerhoff program at UMBC, we wondered if the program could be successfully replicated on other college campuses, particularly in light of the fact that earlier attempts at other schools did not succeed.

In a study published April 26, we conclude that the answer is: yes. We conducted the study with funding and advisory support from Howard Hughes Medical Institute. We are part of the inter-institutional research team that has tracked the academic performance of the students on our campuses.

Before we get into the details of our findings, first here’s a bit of background on the Meyerhoff Scholars Program and how it works.

For the past 30 years, minority students who are part of the program are coached to sit in the front rows of their classes, raise their hands to ask challenging questions, and stay after class to engage their professors. These cohorts of students attend a summer bridge program before their first semester in college, live on the same residence hall and form study groups. They also volunteer in communities, work in laboratories on campus during the semesters and off-campus during summers throughout college. 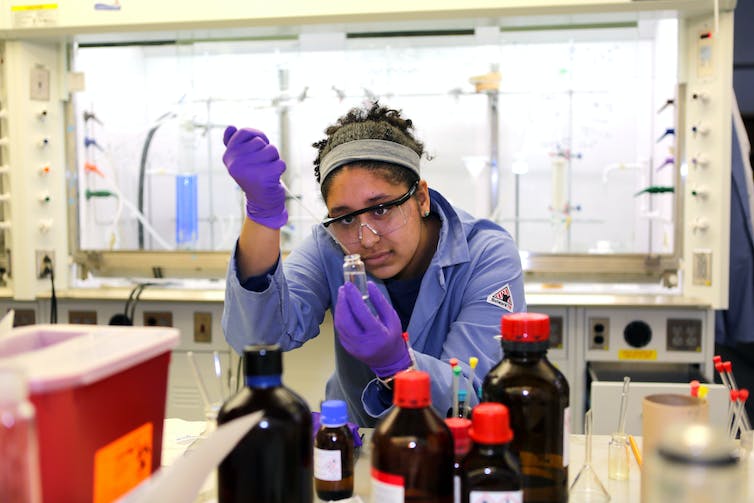 Faculty and campus leaders serve as champions for their success until and after they complete bachelor’s degrees.

The cohort-based program recruits high achieving high school students to work closely and excel together. Critics have said that practice of picking top students is “elitist.” But Hrabowski, the co-founder, has defended the program as being responsive to students who want to earn an advanced STEM degree.

Evidence shows that African American Meyerhoff scholars earn higher grades in STEM majors – 0.25 points higher on a 4.0 GPA, to be exact. Evidence also shows that African American Meyerhoff scholars are twice as likely to graduate from STEM majors than similar students. They are also 7.5 times more likely to pursue and complete advanced degrees versus those who decline the scholarship.

Brent Staples, an editorial writer for The New York Times, has noted that the Meyerhoff Scholars Program is “so well known that the university no longer needs to recruit for it.”

“Critics have sometimes accused the Meyerhoff program of cherry-picking bright students who would perform spectacularly well wherever they went to school,” Staples wrote. “But the numbers suggest that the school’s instructional strategy makes a real difference.”

Can the program be replicated?

“Some critics have argued that although the Meyerhoff program is successful at UMBC, its success could not be replicated elsewhere,” Freeman Hrabowski acknowledged in an article he co-authored for Issues in Science and Technology. “They maintain that UMBC is a unique place with a president who is African American and a program champion in a way that cannot be copied. They also claim the program is expensive.”

Prior to these programs, UNC and Penn State each had between 100 and 200 graduates who went on to earn STEM doctoral degrees but only four to six of the students were African American students. While it’s too early to tell what the outcome will be, preliminary indicators suggest that both programs are on target to surpass early Meyerhoff rates of entry into STEM Ph.D. and MD-Ph.D. programs. For instance, the rate for the first group of Meyerhoff scholars back in 1993 was 10%, whereas the rates for UNC and Penn State in 2017 were 21% and 50%, respectively. The current Meyerhoff rate of entry into STEM Ph.D. and MD-Ph.D. programs is 48% immediately after graduation.

Some may think that the programs got these results by cherry-picking exceptionally talented students. To address this question, we looked at students who were in the programs and compared them to students of similar demographics and academic strength and interest who were not in the programs. The study involved nearly 1,500 students across the three campuses.

What our findings show is that in order for a Meyerhoff-type program to work, the program can’t be implemented in just any old way. Success requires a full commitment to the entire Meyerhoff model. It also takes training program staff and faculty on how to follow the model fully. Unlike earlier attempts at other schools, UNC and Penn State implemented all aspects of the program.

It also takes money. For instance, the programs at Penn State and North Carolina run off endowments of US$7.1 million and $15.5 million, respectively. Both endowments were created by dedicated fundraising campaigns, much of it going to scholarships to cover the cost of tuition, research and travel experiences for the students.

Finally, there should be a rigorous evaluation of the program that provides ongoing feedback and that tracks the academic performance of program participants.

If more colleges follow the Meyerhoff Scholars Program, it stands to reason that years from now there will be more individuals from diverse backgrounds excelling in STEM careers, much like Jerome Adams, Angelique Johnson and Isaac Kinde are now.

Editor’s Note: The Conversation has received funding from the Howard Hughes Medical Institute.