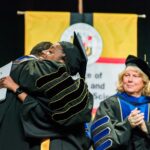 UMBC’s Meyerhoff Scholars Program has been lauded as a national model for supporting diverse students in STEM fields. Other institutions across the United States have begun to ask if UMBC’s approach could work for them. A new paper published in Science answers that question with a resounding “yes.”

Since its inception in 1989, UMBC’s Meyerhoff Scholars Program has graduated 739 students with undergraduate degrees in science and engineering, with 76 percent continuing on to graduate or professional programs in STEM. Meyerhoff alumni have earned 300 Ph.D. degrees, 130 M.D. degrees, 54 M.D.-Ph.D. degrees, and 253 master’s degrees to date, and hundreds more are currently pursuing graduate degrees.

While these high achieving, research-focused students are more likely than the average student to go on to a graduate degree, research has shown that their UMBC experience has had a major impact on their trajectories. Highly qualified students who were offered admission to the program but opted to attend other universities were half as likely to graduate with a STEM undergraduate degree and about five times less likely to pursue a graduate degree in STEM than those who accepted the offer to join the Meyerhoff Scholars Program.

The program has also resulted in a culture shift that supports the success of underrepresented students in STEM who are not Meyerhoff Scholars, and has informed the creation of similar scholars programs at UMBC focused on other fields.

With all these positive results, the major question became: Is the Meyerhoff Scholars Program inherently unique to UMBC, with its charismatic African American president, status as a historically diverse institution that has welcomed students of all races from its founding, and location in a region rich in diversity? Or could similar programs be implemented at very different institutions with similar success?

The new paper in Science reveals, for the first time, findings from the first four years of a five-year initiative to adapt the Meyerhoff Scholars Program at Pennsylvania State University at University Park and at the University of North Carolina at Chapel Hill, supported by the Howard Hughes Medical Institute.

While strikingly different in some ways, these three institutions now share a commitment to all components of Meyerhoff-style programs. These include intensive advising, immersive transition activities the summer before the students’ first semester of college, institutional leadership that makes the program a priority, training for faculty and staff, and other components.

Findings from Penn State’s Millennium Scholars program and UNC’s Chancellor’s Science Scholars program show exciting success at an accelerated pace, with students achieving the project’s goals at a level on par with the success of recent Meyerhoff cohorts. For example, retention in STEM among the Penn State and UNC cohorts was similar to that of current Meyerhoff Scholars. Additionally, the average GPAs and four-year graduation rates of the first Penn State and UNC cohorts exceeded that of the first four Meyerhoff cohorts, in the early 1990s. These findings are especially encouraging, because the locations, historical leadership, and student bodies at these institutions look very different than they do at UMBC.

Findings also suggest benefits for students of all backgrounds—including, but not limited to, the 65 to 80 percent of program participants who are from underrepresented groups in STEM. At all three institutions, students in the program had higher GPAs and were more likely to stay in STEM majors than classmates who did not participate in the program, regardless of their race, ethnicity, or gender.

Naomi Mburu ’18, a Meyerhoff Scholar and MARC U*STAR Scholar at UMBC, and now a Rhodes Scholar at Oxford University, works in the lab with her faculty mentor.

“These findings confirm that Meyerhoff-like programs and student outcomes can be achieved elsewhere, even at institutions very different from UMBC,” says Michael Summers, Robert E. Meyerhoff Chair for Excellence in Research and Mentoring and Distinguished University Professor at UMBC.

Based on the promise of this adaptation, other universities have begun exploring Meyerhoff-like programs, with the Chan Zuckerberg Initiative recently announcing a massive replication effort in University of California system. “It is my hope that this initial effort has laid the groundwork for partnership expansion with an even broader range of institutions,” Summers says.

With the impressive results just published in Science, Summers notes, “The high level of success achieved at UNC Chapel Hill and Penn State should now show all institutions that inclusive excellence is an achievable priority, regardless of the institution’s size, location, and history. Success was dependent on the willingness of institutions to partner together and learn from each other.”

Banner image: Eudorah Vital ’18, a Meyerhoff Scholar and Howard Hughes Medical Institute Scholar and the 2018 UMBC valedictorian, hugs President Hrabowski after giving her remarks at commencement. All photos by Marlayna Demond ’11 for UMBC.