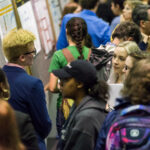 UMBC students are diligently making final touches to their presentations in preparation for the 23rd annual Undergraduate Research and Creative Achievement Day (URCAD) on Wednesday, April 24. Students’ research projects are as diverse as UMBC students themselves. This year, URCAD has highlighted research that explores diversity and inequalities through three thematic series, focusing on research about Baltimore, LGBTQ+ topics, and international topics.

These presentations affirm a core goal of URCAD. As Katharine H. Cole, vice provost and dean of undergraduate academic affairs, has shared, “UMBC encourages students of all disciplines to engage in mentored projects and through creative thought and focused inquiry, to discover in themselves their passion.”

Shadia Musa ‘19, American studies, focused her research one exploring how sixth-grade students of color at James McHenry Elementary/Middle School in Baltimore City come to identify with STEM fields. Through her work as a Sherman STEM Teachers Scholar, Musa explored the impact of restructuring learning environments to increase students’ involvement in STEM disciplines.

At James McHenry, where many families don’t have confidence with science and math topics due to historic inequalities in education, teachers, parents, and community organizers collaborate with each other to create more and earlier points of entry into STEM education for students, using an inquiry-based approach.

“I worked with students to identify issues important to them, like having a grocery store nearby. We then created a 3D model of the store out of cardboard,” explains Musa, who plans to continue teaching in Baltimore City. “Through this interactive process, students learned and strengthened their grouping, measurement, computation, and spatial skills as well as cooperative learning skills, and involved their families in the process.”

Musa will present Combating Academic Inequity: A Community-based Approach to Cultivating a Love for STEM within Students of Color at 2:15 p.m. in UC 310.

Intersections of LGBTQ and Jewish identities

Cliel Shdaimah ‘19, gender, women’s, and sexuality studies, researched intersecting identities in her own queer and Jewish communities through interviews with five LGBTQ rabbis in the United States and in Israel. “In the last five years I realized that I was queer and wanted to find a way into my Judaism that was natural but that also celebrated that part of myself,” explains Shdaimah.

The interviews revealed three insights into how the rabbis were managing their identities. First, they described their visibility as queer people and as Jewish family members in Jewish religious spaces. They also dealt with addressing their LGBTQ identities with social justice work. Third, the rabbis had to find ways to incorporate their values as both Jewish and LGBTQ people when interpreting Jewish religious texts and teachings.

“Through this and other research projects at UMBC I had the joy of reading feminist and queer ways of thinking and the Torah,” says Shdaimah. “I have been able to bring all of my identities to my personal life but also to my academic life through different research projects that helped me understand what my possibilities are for the future.”

Julia Blurton-Jones ‘21, visual arts, took a very personal perspective in creating a short animation based on her experience growing up as a gay woman in Catholic private schools. Her film shares the experience of being asked to read a passage from a textbook that implied same-sex marriage should not be allowed. Through animation, she explores this dilemma of having to betray yourself and conveys the fear the protagonist is experiencing.

In her experience with members outside of the LGBTQ community, Blurton-Jones feels coming out is seen as a black and white situation—you are either in or out. But that’s a  misconception, she says.

“There is a greyness to coming out,” shares Blurton Jones. “People in the closet have to actively hide and lie a lot and pretend to disagree with homosexuality. People out of the closet have to decide to continuously come out in different environments.”

This project proved tremendously gratifying for Blurton-Jones. “I am passionate about animation,” she says. “It is a medium where I can mess with reality to portray complex feelings.”

Blurton-Jones will present “Traitor: An Animated Short” at 2:30 p.m. in the Fine Arts Recital Hall.

Separation of voice from body

As a sound professional, Daniel Goldstein ‘18, media and communications studies, is used to mixing different voices to convey ideas, events, and information. For his independent research project, he was interested in researching the effect on different communities of the separation of the voice from the body that occurs in voicing animations, doing voice-over narrations, and creating voices for new digital platforms.

“I wanted to think critically, holistically, and analytically about what it means to cast a specific person as a narrator or a character for animation, and how over time they have created norms about gender and race based on stereotypes,” says Goldstein.

One major example is The Simpsons, where the South Asian character of Abu is portrayed by a white male voice referencing stereotypes of English spoken with a South Asian accent. “This has many negative social and political ramifications,” says Goldstein. “Abu’s voice has been used to create voice norms for an entire community that is not adequately represented on the show.”

Goldstein also shares that he found positive examples of inclusion for a broader range of voices. He describes that theatre voice coaching has helped some members of the trans community match their voice with their identity. Also, looking at growing digital platforms, he notes, “Modern consumer technology like Alexa, Siri, and podcasts, allows traditionally non-normative voices to be successful and fulfill roles that are historically very gendered.”

Goldstein will present Will You Listen?: A Critical Analysis of Gendered and Racialized Disembodied Voices in Contemporary Media Culture at 1:15 p.m., UC 204.

Sparked by her sister’s interest in Korean culture, Sarah Natterman ‘20, modern languages, linguistics, and intercultural communication and Asian studies, began learning the Korean language in high school. At UMBC, she began studying Korean art, culture, and social issues in greater depth. Natterman says, “I combined both my academic and personal interests in visual and performing arts to research how the South Korean regime of Park Geun-hye in between 2013 and 2017 affected Korean contemporary art.”

Her research explored the effects of Park Geun-hye censoring 10,000 artists and how censorship restricted and grew art in Korea. As a result of the regime, Korean art developed two movements. One was reminiscent of a past cultural movement, with prominent Korean cultural themes. The other included more abstract themes for a global market. Both influenced the evolution of contemporary South Korean art and culture in the world today.

“I want people to see South Korea as a whole. Politics are important but they can often mask South Korea’s vibrant literature, culture, and theatre,” shares Natterman. She will further her study of South Korean culture next year through UMBC’s academic exchange program with Seoul National University.

Natterman will present Modern Dualism in Korean Contemporary Art at 9:45 a.m. in UC 310

As a student of social work, Rebeccah Mann ‘19, is familiar with the U.S. social work model, which depends largely on federal, state, and local funding to provide services. She was in search of a different perspective on social work delivery models. Through the University Studies Abroad Consortium, Mann enrolled in a social work program at the University of Ghana.

Mann, with other social work students, introducing themselves to a class in Ghana. Photo courtesy of Mann.

She found that in Ghana there isn’t a vast network of federal, state, or local funding. Social workers in Ghana pursue a more creative and collective approach to fundraising to support the delivery of social work services.

“Through local sales of goods, international sponsors, and a barter system, organizations could be paid for the services they provided and communities could continue to access those needed services,” says Mann. “The innovation has inspired me to see possibilities instead of obstacles as I become a professional social worker.”

Mann will present A Comparison Between Social Service Delivery Systems in Ghana and the United States, 10-11:30 a.m. in the UC Ballroom.

URCAD guests are encouraged to learn more about the broad range of presentations on Baltimore, LGBTQ+, and international research topics. A full listing of all student presenters and their topics and presentation times is available through the URCAD website.