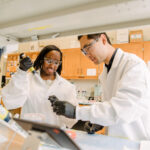 “I just had this feeling that there had to be more to this story,” says Nicolle “Niki” Konkel ’18, on the striking lack of women in her art history textbooks. So, with the support of faculty mentors, in her senior year she embarked on research that has opened new doors in the art world.

Student passion guided by faculty support is part of the fabric of UMBC. Konkel’s experience is one exciting example of how this winning combination can make possible big breakthroughs.

Konkel is an art history and museum studies major who came to UMBC after attending Frederick Community College. While at FCC, She worked 30 hours a week in addition to her studies to fund her first trip to the Netherlands, a voyage that shaped her career goals. Now, she is contributing to a new branch of art history research on women of the De Stijl, an early 20th-century avant garde Dutch art movement.

“There’s so much still to learn, and that fuels my passion to go to graduate school and continue this research,” she says. “When marginalized voices can be heard and placed more within the mainstream, I think that’s so important.”

This fall, Konkel was also able to gain professional experience as an curatorial  intern at the Smithsonian National Museum of American History. She was part of the curatorial team for an entertainment exhibit that will be on display for two decades.

Konkel says the support of her mentors helped make it all possible, especially her senior thesis mentor, visual arts professor Kathy O’Dell. All of the professors “are so invested in us here. They care a lot about my growth and what I’m going to do afterward,” Konkel says. “They want to help you channel your passion.”

Alexis Waller ’18, biological sciences, has had similarly powerful experiences with research and mentorship. UMBC STEM BUILD, an NIH-funded initiative to increase diversity in the biomedical workforce, “showed me what research actually was,” Waller says. Before UMBC, she shares, “I’d never been inside a lab.” Now? “I just love being in the lab setting and doing hands-on research.”

In her first year, Waller presented at the UMBC Undergraduate Research Symposium with BUILD. With support from Laura Ott, the active learning coordinator for STEM BUILD, Waller joined Michael Summers’s lab in 2016. The lab’s research focuses on how the HIV-1 retrovirus assembles copies of itself within infected cells, so that the copies can emerge to infect other cells.

In addition to Summers, postdoc Pengfei Ding provides direct research mentorship to Waller. “He has always been very patient and encouraged me to ask questions,” Waller says.

Waller started out in a shadowing role in the lab, but says, “as I’ve gotten more confident and knowledgeable, the more responsibility I’ve been given.”

Now a MARC U*STAR Scholar, Waller is continuing work on her team’s project studying a step in the replication of HIV. By contributing to a better understanding of that step, she’s helping provide the knowledge necessary for other scientists to develop treatments to block HIV replication, preventing spread of the infection.

After graduation, Waller will continue to work in the Summers lab as a research assistant while she applies to Ph.D. programs in microbiology. “Being a part of BUILD and MARC, and working in the Summers lab, has all led to me deciding to pursue a Ph.D.,” she says.

Like Waller, Abby Cruz ‘18 is also a biological sciences major and a MARC U*STAR Scholar. When she came to UMBC, she believed science was a solitary pursuit, but that changed after she joined Fernando Vonhoff’s biology lab. “I look forward to going to lab because of the collaboration with other people,” she says.

Cruz has been looking at whether certain genes may be associated with human motor neuron diseases, such as ALS, using fruit flies as a model. Scientists at Yale University will use her results to inform their study of motor neuron disease in human cells.

She also works part time in a neurology clinic, where she interacts directly with patients. “I love it,” she says. “It’s what gets me up every day—that I’m part of a community where I can see the research and the clinical side go hand in hand.”

Cruz reached out to Vonhoff just before she joined UMBC from Howard Community College in 2016, and he’s been a supporter ever since. “If it wasn’t for Dr. Vonhoff I wouldn’t have been able to do everything I did,” she says. “If you’re willing to try and put in the effort, his attitude is, ‘Let’s make it happen.’”

Abby Cruz ’18 and her mentor Fernando Vonhoff check on a vial of fruit flies, their study organism. Photo by Marlayna Demond ’11 for UMBC.

Before starting work in the lab, Cruz was planning on medical school. Now she’s looking toward an M.D./Ph.D. or D.O./Ph.D. (doctor of osteopathic medicine). “Focusing on that connection between the research and the clinic has really solidified my future goals,” she says.

When Julian Tash ’18 approached Constantine Vaporis, history professor and former director of UMBC’s Asian studies program, after an art history class one day, he expected a helpful conversation about his career goals. He came away with a game-changing connection to Robert Mintz, the curator of Japanese art at the Walters Art Museum in Baltimore.

Tash, a Humanities Scholar, had noticed Asian art was given less attention than Western art in his high school courses. His further exposure at UMBC to the rich traditions found in Asian art, however, inspired him to pursue a double major in Asian studies and history. With Vaporis’s support, he began an internship at the Walters.

Cataloguing Buddhist statuary at the Walters got Tash “interested in the question of how to connect museum visitors with these statues, when they don’t have a background in the culture in which the objects were produced,” he shares. That interest led to a project he pursued with guidance from Vaporis and visual arts professor Preminda Jacob.

Julian Tash ’18 says most of his research, when he isn’t doing fieldwork, involves a lot of reading in the library. Photo by Marlayna Demond ’11 for UMBC.

Tash received funding from a UMBC Undergraduate Research Award and a Bridging Scholarship from the American Association of Teachers of Japanese to travel throughout Japan and in the U.S. to explore how Buddhist statues are displayed in their native context compared to in American museums. His resulting research paper, which has been selected for publication in the UMBC Review, recommends that U.S. museums use technology to help visitors see more clearly how the statues appear in their original contexts, in Japanese temples.

Tash has already shared his research with curators at the Metropolitan Museum of Art, British Museum, and Freer and Sackler Galleries. He has also presented other work at the Bard Conference on Asia and the Environment, with research partner Jennifer Christhilf ’19, geography and environmental systems. That project was a new direction for Tash, exploring the impacts of dam construction projects in China and downstream countries such as Vietnam and Cambodia.

Julian Tash ’18 and one of his mentors, Julie Rosenthal, stand by his research poster about dam removals on the Mekong River in China. Photo by Marlayna Demond ’11 for UMBC.

“Working with someone in the sciences is really emblematic of UMBC, because we’re bringing it all together, in a way that’s vitally important to this region,” says Tash. “That was a great experience and it got me thinking about the intersection of the humanities and policy.”

Although he’s graduating, collaborations Tash has helped build will continue at UMBC, including a Perspectives on Asia conference that will be co-sponsored by Johns Hopkins University.

Tash has applied for a Fulbright Fellowship to conduct research in Taiwan as well as graduate programs.

Like Konkel, Cruz, and Waller, when Tash reflects on his UMBC experience, it all comes back to mentorship and support. “Even though these professors all have really busy schedules, I would go to them with an idea, and even if it wasn’t in their immediate area of study, they all made such phenomenal efforts to support me,” he shares.

“UMBC put the resources in front of me,” Tash says. “I just thought, I could do all these things—I just have to try to pursue them.”

Banner image: Alexis Waller ’18 and her mentor, Pengfei Ding, at work in the lab. Photo by Marlayna Demond ’11 for UMBC.