UMBC grads ready to travel the world as Fulbright Scholars 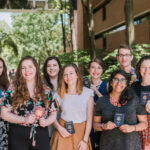 “This year’s Fulbright Scholars demonstrate the excellence of the humanities and social sciences at UMBC, as well as the centrality of global understanding to a contemporary liberal arts education,” says Scott Casper, dean of CAHSS.

The United States government established the Fulbright Program in 1946 to increase mutual understanding between people of the U.S. and other nations around the world. Today, this “flagship international educational exchange program” is active in over 160 countries. It is highly competitive, receiving over 11,000 applications each year. Recipients are chosen based on academic or professional achievement and demonstrated leadership potential.

UMBC began participating in the Fulbright Program in 1970. Since then, Fulbright has chosen 70 UMBC students to represent the United States through research, teaching English, or pursuing graduate studies internationally. UMBC has been particularly successful in the past 5 – 10 years, seeing a major increase in the number of Retrievers—students and alumni—recognized as Fulbright Scholars.

“In the last ten years we have had 51 Fulbright recipients, with three students choosing other competitive options,” explains Brian Souders Ph.D. ’09, language, literacy, and culture, Fulbright Program advisor. “In general, we have gone from one to three recipients a year to seven to eight annually over the past five years.”

UMBC’s increasing success rate is thanks to dedicated support from faculty and staff, as well as the International Education Office’s Fulbright Boot Camp. Participating students receive guidance and advice throughout the application process and access to a supportive network of peers and mentors as they plan for their journeys.

David Di Maria, associate vice provost for international education, is excited that UMBC is connecting more and more students with transformative learning experiences. In Fulbright applications over the past year, he notes, “UMBC demonstrates a higher success rate than 123 of 183 top institutions, including half of the eight Ivy Leagues.”

Morgan Chadderton ’18, modern languages, linguistics, and intercultural communication, will teach English in Kyrgyzstan while continuing to strengthen her Russian language skills. Chadderton, a Humanities Scholar, previously studied in Kyrgyzstan as a Gilman Scholar in 2016. She looks forward to her Fulbright experience as the next step toward a foreign service career.

“I plan to work with American Corners, a program associated with the United States Embassy,” says Chadderton. “I want to create a book club, host film screenings of popular American films, and plan cooking classes.” She notes, “It’s important to me to create an immersive, informal, and educational environment similar to my first experience in Kyrgyzstan that helped me to better understand the language and culture.”

Kelly Daughtridge ’14, history, ’17 M.A., historical studies, will teach English in Macedonia. She has already visited Turkey, Greece, Malta, Italy, Germany, Austria, the Czech Republic, and Hungary, and is fascinated by the cultures of the region. In addition to teaching English, Daugherty will conduct independent research on contemporary perspectives on tombs in Orthodox churches.

Inspired by her father’s cross-cultural work in the U.S. Marine Corps, Sophia Lopresti ’18, global studies, has already led humanitarian and educational trips to Nicaragua and Panama. She looks forward to teaching English in Indonesia as a Fulbright Scholar and hopes to continue her work there supporting access to oral health care.

“Helping others at home and abroad has allowed me to reflect extensively on the many privileges I have in the United States,” says Lopresti, focusing in particular on access to education and healthcare. Following her Fulbright, she will pursue graduate education in nursing or public health.

Growing up in Howard County, Maryland, Manisha Vepa ’18, economics and global studies, developed an understanding of her Indian-American identity through dance. She also found common ground with classmates from other cultural heritages, particularly Chinese- and Korean-Americans, through the arts, including orchestra. As their friendships developed, they shared food, religious, and cultural traditions. “Instead of focusing on my ‘otherness,’ I started to recognize and become comfortable with the similarities we shared and the differences that made us unique,” says Vepa.

What started as a personal interest became an academic and professional one. As a Fulbright Scholar teaching English in South Korea, Vepa hopes to use popular music as a teaching tool. She also looks forward to learning traditional Korean dance. Vepa plans to enroll in a graduate program on East Asian Affairs upon her return.

Jessica Willis ’17, modern languages, linguistics, and intercultural communication, is passionate about women’s leadership development. As a young woman, Willis enjoyed growing as a leader through the Girl Scouts, which eventually granted her its highest honors, the Gold Award. For the past year, she has served in the Maryland Conservation Corps, an AmeriCorps program focused on protecting natural resources. She hopes to apply skills learned through both experiences to her work teaching English in Sri Lanka as a Fulbright Scholar. While there, she will also work with young women in the Sri Lanka Girl Guides Association and other women’s groups.

Morgan Zepp ’18, global studies and English, developed a deep interest in Lithuanian culture through growing up in a community with a significant Lithuanian-American population. She looks forward to expanding her cross-cultural communications skills by teaching English in Lithuania as a Fulbright Scholar.

As a Humanities Scholar, senior editor of UMBC’s creative arts journal Bartelby, and a longtime tutor at UMBC’s Writing Center, Zepp wants to share her passion for writing to broaden students’ understanding of the English language. She shares, “I am enthusiastic about creating public workshops open to the Lithuanian community based on any kind of writing, where people can assist one another in writing and reading English-language documents.”

Kirk has traveled extensively throughout Europe, including researching and interning at museums and archaeological sites in Romania, the United Kingdom, and Italy. She has knowledge of Italian and advanced Latin. In addition to continuing her research through local museums and libraries, she looks forward to developing her Romanian conversation skills, while helping Romanian students perfect their English.

Marc Schultz ’18, political science and global studies, will return to China through a Fulbright Study/Research Award focused on urban development after previously studying at the Harbin Institute of Technology as a Boren Scholar. He will take intensive Sichuanese Mandarin language courses funded through the Critical Language Enhancement Award to help him better conduct research in the Sichuan province.

The Sichuan province was heavily impacted by a deadly earthquake in 2008. Schultz hopes to explore how Sichuan residents are using innovative urban development practices to address issues of inequity and displacement following the earthquake. “Living in Baltimore has deepened my awareness of the massive effect that the urban environment has to uplift or further oppress its residents,” says Schultz.

Following his Fulbright experience, Schultz plans to complete a graduate degree in international studies in preparation for a foreign service career.

All photos by Marlayna Demond ’11 for UMBC. Video by Corey Jennings ’10  for UMBC.