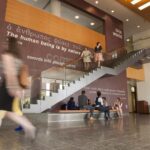 The Vietnam War lasted for twenty years and claimed the lives of millions of civilians, Vietnamese soldiers, and 58,220 U.S. military personnel. In the late 1960s and early 1970s, public opposition to the war and the draft grew. Protesters took a series of non-violent direct actions to make their opposition known, including two key protest actions in Maryland. The first was the protest of the Baltimore Four, who symbolically poured blood on draft records. They inspired a larger protest by a group now known as the Catonsville Nine. Fifty years later, a special event hosted by UMBC’s Shriver Center will explore their story.

Design by Candace Cage for the UMBC Shriver Center. Photos from public archives.

The UMBC Shriver Center will reflect on this story of activism throughout the month of May as part of the Center’s broader 25th anniversary programming, with support from Maryland Humanities and the Catonsville Nine 50th Committee. Events will kick off the weekend of May 4 with a symposium on social justice, creative non-violence, and spirituality and activism.

The Catonsville Nine included nine Roman Catholic men and women — Father Philip Berrigan, Tom Lewis, Father Daniel Berrigan, Brother David Darst, John Hogan, Marjorie Melville, Thomas Melville, George Mische, and Mary Moylan — who entered Selective Service Local Board #33 in Catonsville, MD in May of 1968, removed over 300 draft files, and burned them in protest of the violence and death in Vietnam. They were arrested, convicted, and sentenced to 2-3.5 years in federal prison, and their action inspired more than fifty subsequent draft board actions around the nation. In the face of this mounting opposition, President Nixon ended the draft in 1973, and the U.S. has not initiated a draft since then.

“The Catonsville Nine’s protest is one of the most significant acts of war resistance in our nation’s history, and it happened just down the road from UMBC fifty years ago this May,” says Joby Taylor ’05, Ph.D., LLC, director of the Shriver Peaceworker Program at UMBC. “Our goal with our symposium on May 4th, and other upcoming events, is to bring people together to better understand the story and impact of the Catonsville Nine, as well as the lessons and questions it raises today for those engaging in citizen-led nonviolent social change efforts.”

“This was a great opportunity to preserve these stories,” says Shewbridge, explaining, “Eberhardt, who will be at the symposium, is one of two surviving members from the Baltimore Four.” Shewbridge notes, “The story of people putting their beliefs into action resonated deeply with my students.”

Rebecca Wireman ‘18, media and communications studies, one of the student filmmakers, grew up in Catonsville hearing stories about the Catonsville Nine protests, and valued the opportunity to meet some of the community members involved. She helped conduct interviews, did camera work, and edited footage in post-production. “I was excited to film local oral history,” says Wireman. “It is really inspiring to learn about activism and political action from these protests, especially now when young people are looking for ways to voice their opinions.”

“As a public historian,” says Tropea, “ I think it is important to tell this story of regular people who saw a problem with the war, the draft, the deaths and the killing, and found a solution through effective non-violent actions.” He shares, “They…helped change people’s minds about the Vietnam War and their example continues to inform political protests today.”