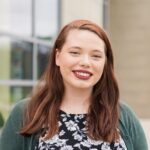 As the first member of my family to attend university, I was not quite sure what to expect, but I knew from my first campus tour that UMBC would be a place where I could succeed.

Morgan Chadderton’s time at UMBC has been defined by an intellectual curiosity driving her to pursue a broad range of interests in the social sciences and humanities. From day one at UMBC, she says, “I was encouraged to go beyond the usual single-degree path, as well as to conduct research, explore new subjects, study abroad in two countries, and get involved with student life.”

Chadderton, a Humanities Scholar in UMBC’s Honors College, received a highly selective U.S. Department of State Benjamin A. Gilman International Scholarship that provided her an opportunity to study in Kyrgyzstan in June 2016. She also completed a study abroad in Lyon, France, and continued to excel academically at UMBC. She is graduating with a perfect GPA, has been inducted into the Phi Beta Kappa honor society, and received the Overall Academic Achievement Award in the modern languages, linguistics, and intercultural communications department.

As president of the UMBC Russian Club, Chadderton helped plan a special event in December 2017, designed to highlight the culture of former Soviet states in an immersive and informative way. Photo courtesy of Chadderton.

Through each new educational and leadership experience, Chadderton found opportunities to grow. She shares, “As a Humanities Scholar, I felt I belonged to a community of like-minded people. As a member of the Honors College, I was able to explore interdisciplinary topics and learn from new perspectives. As president of Russian Club, I was able to share meaningful cultural exchanges.” Chadderton also served as a conversation partner for the English Language Institute, helping English language learners practice their conversational skills, and served as a note-taker for students with disabilities in courses on American government and politics, and Soviet civilization and culture.

Ultimately, Chadderton says, “I found all of these opportunities promote the same concept: everything can be a learning experience.” She looks forward to soon returning to Kyrgyzstan as a Fulbright English Teaching Assistant, before beginning a graduate degree in Slavic languages and Russian studies.