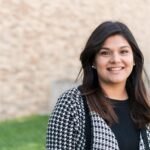 Participating in UMBC Mock Trial has taught me to think more openly, appreciate the perspectives of those that disagree with me, speak professionally and articulately, think on my feet, and advocate for the things I believe in.

Summer Akhtar has served as a leader of UMBC Mock Trial at a particularly exciting time for the team, as it has risen to new heights in recognition and achievement. In 2017, Akhtar helped make history as part of the first UMBC Mock Trial team to travel to Los Angeles for the American Mock Trial Association’s national championship tournament. The team, in which Akhtar serves as senior vice president, has continued to compete in major tournaments throughout 2017-18.

At a regional competition in Maryland this past fall, Akhtar received an all-region attorney award and UMBC earned a bid to the Opening Round Championship Series. Akhtar also received outstanding attorney awards at the Johns Hopkins Blue Jay Invitational in spring 2017 and the Tobacco Road Invitational in fall 2017.

Akhtar competes as a member of UMBC Mock Trial.

“Mock Trial introduced me to my greatest passion: trial advocacy,” says Akhtar. She reflects, “I have come so far since I started my UMBC Mock Trial career,” noting that she feels privileged to have acquired such significant experience as a student attorney on both defense and prosecution.

Akhtar has also excelled academically in her time at UMBC, being recognized as an outstanding scholar-leader in political science and a member of the Pi Sigma Alpha Honor Society and Golden Key Honour Society. She knows the rigor of her academic and extracurricular activities will benefit her as she enters law school.

Portrait by Marlayna Demond ‘11 for UMBC.