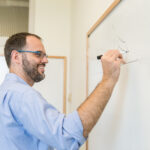 Scientists, across all areas of study, seek to help us better understand the world in microscopic and massive ways. How does it work? What rules does it follow? Theoretical physicists in particular have developed theories that explain how parts of the universe work: classical mechanics for objects at everyday sizes and speeds, quantum mechanics for very tiny objects at everyday speeds, special relativity for things that approach the speed of light. But what about very small objects that also have very high energy, like the universe at the start of the Big Bang?

“This final case—small objects with high energy—is very important if you want to understand where the universe comes from,” says Sebastian Deffner, assistant professor of physics at UMBC. But physics theories to date aren’t quite able to handle it. They assume that systems are at least locally stable, which doesn’t hold for some of the most interesting cases, from the Big Bang to black holes. Deffner adds, “If we want to understand all these cosmological models, and we want to understand the thermodynamics of the universe, we actually have no means to do that.” That may be about to change.

Deffner’s new paper in Physical Review X with co-author Anthony Bartolotta, a Ph.D. candidate at Caltech, builds on an explosion of research in the field of quantum stochastic thermodynamics in the last decade. This field describes the laws of thermodynamics—one of the fundamental pillars of physics—at a microscopic level for the first time. Importantly, it takes into account how their immediate surroundings affect small systems in a way that differs from how the environment affects larger systems. Deffner and Bartolotta’s work extends this field even further to examine tiny systems at very high energies that are changing quickly.

The work is pioneering, but it fits into a larger ecosystem of existing physics theories. For example, in everyday systems, you intuitively expect that if you put one particle in, you will get the same one particle out. It might be going faster or slower, or in a different direction, but it’s still the same single particle. However, at high energies, like those generated at the Large Hadron Collider in Switzerland, it’s actually possible to end up with a different number of particles than you started with. The famous equation e = mc2 allows mass to be created from energy when the energy is extremely large. Deffner and Bartolotta found that in their model system with high energy and at small scale, the system was much more likely to return multiple particles upon sending in just one, than to come out with the initial particle and no more, which was a huge surprise.

The math to calculate it all was “incredibly hard,” Deffner reflects, but the end result, which involved finding a way to compute an infinite number of possibilities, “was actually quite beautiful,” says Bartolotta. He shares, “Our hope is that this paper will now open the doors for other people in other fields that previously couldn’t use these techniques to now use them.”

Deffner’s overall research goal is to broaden the uses of the framework of thermodynamics, “until we find neat things that no one has ever seen before,” and his latest paper fits that bill.

“I’m still totally blown away by the result,” Deffner says, but he’s also already contemplating possibilities for future research directions. When it comes to untangling the mysteries of the early universe, he notes, “there’s a lot that we have to do next.”