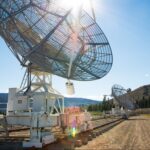 In 2016, Jane Sprigg, Ph.D. ’16, physics, submitted a research paper demonstrating a technique that would enable a camera to snap crystal clear images from an airplane or satellite, even over deserts with air turbulence caused by severe heat. Her paper was rejected. Despite strong evidence presented in the paper, one reviewer refused to accept the idea that quantum theory could apply to light other than lasers—and physicists agree that classical theory does not lead to turbulence-free imaging. Sprigg has since successfully pursued her invention in industry, but the academic world remains skeptical.

Yanhua Shih, professor of physics and Sprigg’s advisor, told his new Ph.D. student, Thomas Smith, that the physics community didn’t think it was possible to use ideas from quantum theory, specifically quantum interference, to create turbulence-free measurements. Smith replied simply, “Why don’t we demonstrate that it is?” In less than a year, the pair has done so in a context other than a camera (with the help of the lab’s toaster oven), and they have just published their results in Physics Review Letters, a premier physics journal.

The paper demonstrates Smith and Shih’s development of an interferometer, a device that uses the interference of light to make precise measurements, that is unaffected by turbulence in the air. “For now, large interferometers with high sensitivity have to be put in a vacuum to avoid atmospheric turbulence and vibrations,” says Shih. “Our research shows how you could just put them in the open air—no problem.”

Accommodating the limitations of today’s interferometers can be quite costly, especially for devices precise and large enough to detect elusive gravitational waves from outer space. “Detecting gravitational waves is the most expensive use of the vacuum, because it’s on such a large scale,” says Smith.

Their setup is a modification of a classic type of interferometer, called the “Young’s double-slit,” where light hits a plate with two slits and passes through to a detector beyond the slits. The detector counts the number of light particles (photons) that strike it per second. Analysis software uses that information to calculate the interference (how the light particles interact), which depends on the likelihood of a photon passing through one slit or the other. That’s where the quantum part comes in—at the single particle level, you can’t know for certain which path the photon took, so the analysis is based on probabilities of the potential paths. It’s as if the particle is “interfering with itself,” says Shih, quoting renowned theoretical physicist Paul Dirac.

In Smith and Shih’s interferometer, there is still a plate with two slits, but there are two detectors waiting to count photons on the other side. Much more complex software is interested in how many times one photon strikes the first detector and another photon strikes the second detector within each of many tiny time windows. In typical interferometers, any turbulence in the air will unequally affect the two possible paths of a single photon (either through the first or second slit) and disrupt the interference measurement. In this case, however, the photons are analyzed as pairs. It is possible for the two possible paths of the photon pair to be identically affected by turbulence, so that it does not alter the interference pattern—leading to a result that is “turbulence-free.” In this situation, Shih explains in a nod to Dirac, “the pair is interfering with itself.”

The physics is complex, but Smith says one of the hardest parts was generating enough turbulence in the lab to get strong results. First he tried candles; then they tried heat guns. In the end? At the recommendation of fellow Ph.D. student Brian Uthe, “I took the toaster oven and deconstructed it partially, and I’m using the toaster oven right now,” Smith explains. “Sometimes when you’re doing an experiment, it’s not the high-tech part, but the low-tech part that is the problem,” says Shih with a smile.

Both authors are hoping their new research will bring about a sea change in the physics community, and encourage even the most traditional physicists that quantum interference applies in optics experiments using non-laser light. “It should change the whole picture,” says Shih. There are already signs that they’re stirring the pot: Smith has given invited talks at three major conferences, including at Princeton University in front of physics giants from around the world. Next steps include trying to apply the same principles to other types of interferometer.

Smith, who is in his first year in Shih’s lab, is trying to absorb it all. “It’s a bit overwhelming,” he says. “I guess what’s most exciting for me is that we are working on fundamental physics, and I enjoy working at the basic fundamental level—discussing single photons and quantum interference,” and even so, it’s easy to imagine where the work could lead him. From cameras that can see through heat waves to confirming Einstein’s fundamental theory by detecting gravitational waves in open air, “what’s exciting is seeing the potential applications ahead of us.”