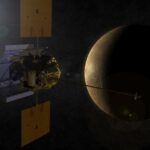 New research by Sander Goossens, associate research scientist at UMBC’s Center for Space Science and Technology, and colleagues offers a fresh perspective on a question of universal importance. The study, published in Nature Communications, employed a novel method to learn more about the Sun and further confirmed the constant G, the mainstay of Einstein’s theory of general relativity that predicts how extremely large masses warp space-time.

To address such big ideas, “You need the solar system as your laboratory,” says Goossens. The research team, led by Antonio Genova, research scientist in MIT’s Department of Earth, Atmospheric, and Planetary Sciences, used data collected by NASA’s MESSENGER satellite, which orbited Mercury from March 2011 to April 2015 and carried out “flyby” observations in 2008 and 2009. By tracking and analyzing the orbits of Mercury and MESSENGER over several years, the team was able to separate out the various causes of tiny changes in their orbits.

The Sun’s gravity is the biggest factor that keeps the planets in orbit. As the Sun slowly loses mass from interior processes and the solar wind—which constantly rips particles away from the upper atmosphere of the Sun—its gravity weakens, the planets’ orbits creep away from the Sun, and the solar system expands. The team found that the Sun is losing mass at a rate of 0.1 percent per 10 billion years, causing the planetary orbits to shift by 1.5 cm per year per astronomical unit (the distance between Earth and the Sun).

Other factors also affect the planets’ orbits, such as the Sun’s “oblateness” (how much it bulges in the middle, rather than being a perfect sphere) and how much it warps space-time by virtue of its goliath size, which is described by relativity theory. The team was able to estimate relativity-related parameters, confirming Einstein’s theory beyond what previous studies have found.

This study also further constrained the value of the constant G, which governs gravity’s effect on objects. Scientists continue working to demonstrate that G remains constant in as many contexts as possible. This adds evidence for the hypothesis that G is constant across the universe and hasn’t changed since the Big Bang.

“To some people it might sound like, ‘Well, there’s another confirmation of Einstein’s theory,’ but those are important because we have no idea at what level things might deviate,” says Goossens. He explains, “It’s a constant, so people expect it to be constant, but it’s always been a question whether or not G varies with time, and we’ve been able to put quite tight constraints on that.”

This work is an example of the wide range of questions that can be addressed with a NASA mission like MESSENGER. “This study demonstrates that charting the orbits of planets, such as Mercury, may provide simultaneous new findings in different disciplines,” says Genova, from heliophysics—the study of the sun and its effects on the solar system—to theoretical physics, which includes the study of gravity.

This study is the first to calculate the Sun’s mass loss and oblateness based on observation as opposed to theory alone. Also, previous studies had taken Mercury’s orbit as fixed, based on data from NASA’s Jet Propulsion Laboratory, and actively measured only the satellite’s orbit. Genova, Goossens, and colleagues used an innovative approach, yielding more accurate results.

Eventually, Goossens would like to see this type of analysis expanded even further, to consider more than two celestial bodies at once—perhaps even the entire solar system. Even looking at other pairs of bodies, such as the Sun and a different planet, would be a boon for general relativity experts who have a range of ideas about Einstein’s theory, he says. “Perhaps this could show a way forward for testing those theories as well.”

For more on Goossen’s work with NASA, including the GRAIL mission, see coverage of his research on a massive Moon crater, published in Science.

Image: An artist’s conception of the MESSENGER satellite as it orbits Mercury; photo provided by NASA.