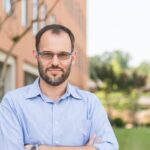 Classical computers have been getting faster, more powerful, and more compact for decades, but they may be reaching their limits, writes Sebastian Deffner, assistant professor of physics, in The Conversation. People have pinned their hopes on quantum computers for the next leap forward in computing technology, he explains, “but my recent research has revealed that quantum computers will have limits of their own, and has suggested ways to figure out what those limits are.”

The physical laws that govern quantum computers, known as quantum mechanics, are very different from the laws that govern classical computers—and everything else in the physical world with which we are familiar. For example, in the “quantum world,” where the largest objects are about the size of individual atoms, an observer can either know an object’s speed or its location—but never both at the same time.

“It is important to realize that this ‘quantum uncertainty’ is not a shortcoming of measurement equipment or engineering, but rather how our brains work,” says Deffner. “We have evolved to be so used to how the ‘classical world’ works that the actual physical mechanisms of the ‘quantum world’ are simply beyond our ability to fully grasp.”

Most people have a general, intuitive understanding of how a combustion engine burns fuel to release energy, for example. There are theoretical limits to gasoline engines that prevent cars from going at the speed of light, but other challenges to the efficiency of engines get in the way first, so in practice we don’t need to consider the ultimate limitations to combustion engines.

“Until recently, though, scholars only had a rather vague idea that quantum physics had limits too,” says Deffner, “but didn’t know how to figure out how they might apply in the real world.” Deffner has been on the cutting edge of finding those limits and defining their applications. “It’s not clear whether the quantum speed limit is so high it’s unattainable—like the car that will never even get close to the speed of light,” he writes, which means it may be important for the future of computing to figure out how the quantum speed limit affects computers that operate in the quantum world.

Fundamental physical limits impose a delay on detecting an object in the quantum world. Each delay is only a few quadrillionths of a second, but the delays accumulate across a computer’s millions of computations. That prevents a quantum computer from going arbitrarily fast and results in an overall quantum speed limit.

Deffner’s research group has found that the quantum speed limit can differ depending on a quantum computer’s design, and sometimes, “unexpected factors can help speed things up, at times, in counterintuitive ways.”

As an example of how the quantum world operates differently from the classical one, Deffner compares the speed of a quantum computer to a particle moving through water versus honey. You might expect the particle in honey to move more slowly, but in the quantum world, the displaced honey filling in the path where the particle has just traveled “can build up pressure that propels the quantum particle forward. This extra acceleration can make a quantum particle’s speed limit different from what an observer might otherwise expect.”

“Just as engineers figured out how to shrink the size of transistors and pack them more closely together on a classical computer chip,” Deffner writes, “they’ll need some clever innovation to build the fastest possible quantum systems, operating as close as possible to the ultimate speed limit.”

As of January 18, 2018, Sebastian Deffner’s article in The Conversation has been viewed more than 40,000 times and republished in The Chicago Tribune, Live Science, RealClearScience, Space.com, Phys.org, and World Economic Forum.