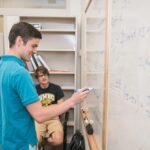 A discovery by UMBC theoretical physicists could improve the performance of one type of quantum computer enough to stimulate major progress in its development, enabling more practical uses of quantum computers in the future. Classical computers (the kind we use every day, from fitness trackers to desktops) compute by toggling their building blocks, or “bits,” between zero and one, so each bit has only two possible states. But the bits that make up quantum computers, called “qubits,” take advantage of quantum mechanics to access many more possible states, allowing faster and more secure computations.

Quantum computers can be constructed from a range of materials. Those based on superconducting materials have made great strides in recent years, but those based on semiconducting materials lag behind because they are plagued by noise: Even extremely small disturbances in the area surrounding their qubits can render an entire system useless. The new finding from UMBC introduces a set of conditions under which the qubits are not negatively affected by noise. Using those conditions could increase computational precision from a maximum of 90 percent to as high as 99.9 percent, pushing the computers closer to a critical threshold of usability.

The new finding “is attacking the bugaboo of this whole class of possible quantum computers,” says Jason Kestner, assistant professor of physics at UMBC and final author on the new paper in Physical Review B. And yet, Michael Wolfe ’17, physics, and first author on the paper, says the finding “is something we stumbled across almost by accident.”

Kestner didn’t expect anything Earth-shattering when he assigned Wolfe an undergraduate research project cataloging the errors caused by noise in a model of semiconductor-based quantum computers. Wolfe says his results were suspicious when they came back predicting a “sweet spot”—a set of parameters where the qubits weren’t affected by noise. After a careful look, however, they realized the sweet spot was indeed predicted by the model, which had been developed by Fernando Calderon-Vargas, Ph.D. ’16, physics. At that point, “I just told [Michael] to drop everything and to look into this,” Kestner says.

Further examination confirmed Wolfe’s initial results indicating the existence of the sweet spot. Controlling the qubits, which in semiconducting quantum computers are microscopic structures made of pairs of electrons, in a certain way prevented noise from disrupting the computer’s computations, but didn’t interrupt the interactions between qubits that are necessary for the computer to function. Using this sweet spot, a computer could complete anywhere from 10 to 100 times more computations before it accumulated too many errors to continue operating accurately.

That kind of improvement gives semiconductor-based quantum computers a chance at catching up to their superconductor-based peers, which don’t suffer as much from the same challenges associated with noise. That’s why the superconductors are “miles ahead right now,” says Kestner, even though semiconductors come with their own set of advantages. “We’re really hopeful that this ends up being a really useful technique for people with this particular type of qubit.”

Next, it’s up to experimental physicists to test out the sweet spot with physical qubits. Wolfe is making sure he’s one of them. On a Fulbright Fellowship at RWTH Aachen University in Germany, Wolfe says, “I’m convincing our team to search for this mysterious sweet spot, despite initial doubts.” If they find it, semiconducting quantum computers could “get comparable attention from big companies like IBM, Google, Microsoft, and Intel who are investing millions of dollars into other qubit platforms,” says Wolfe, so that the true potential of this quantum computing platform could be explored more fully, potentially even surpassing superconductor-based quantum computers for certain uses.

One of the best aspects of the new finding is that it doesn’t require experimentalists to do anything fundamentally differently—only to choose the parameters wisely for experiments they’re already doing. That should make implementation much easier. Next steps for Kestner’s lab include refining Calderon-Vargas’ model to pinpoint “some of the more nitty gritty details,” says Kestner, which is likely to slightly alter the recommended parameters. “We want to try to make sure we get the details right,” he says. “That’s the next step.”