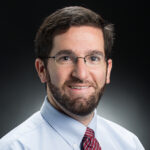 Throughout his career, Philip Graff ’08, mathematics and physics, has conducted research at Cambridge University on a prestigious Gates Cambridge Scholarship, developed an algorithm that enabled experiments confirming the existence of gravitational waves, and worked to improve cybersecurity measures for the U.S. armed forces and Department of Homeland Security.

This fall, the Maryland Science Center named Graff their 2017 Outstanding Young Scientist – Non-academic Track. At a ceremony held November 15, the center honored two scientists and two engineers, including UMBC’s Lee Blaney, associate professor of chemical, biochemical, and environmental engineering. Researchers younger than 35 in academia and younger than 40 in other sectors who have distinguished themselves with accomplishments in science and engineering are eligible for the awards.

Graff’s research career began at UMBC in the lab of Markos Georganopoulos, associate professor of physics, who noted his potential early on. “Once I gave Philip a suggestion on how to solve a key issue with the stability of our code, but my suggestion was wrong in a subtle way,” Georganopoulos remembers. “Philip found my error by himself, modified my suggestion, and fixed the code in two days.”

Yet, Graff maintained his humility as a new researcher. “When you’re starting out in research, there’s a lot to learn in the beginning,” he says, “and [Georganopoulos] definitely put in the time to help me work through that,” especially pertaining to scientific writing. Graff and Georganopoulos published a paper with Graff as first author—a rare accomplishment for an undergraduate—and Graff presented the findings at an academic conference. The paper dealt with modeling blazars, a variety of quasar that Graff describes as “bright and energetic beams of radiation coming from black holes at the centers of galaxies.”

“As an undergrad, Philip took on and completed a computational astrophysics project that was practically at the level of a heavy Ph.D. thesis,” shared Georganopoulos. “Many astrophysicists at conferences had a hard time believing that the problem we worked on was solved by an undergraduate student.”

Graff’s research experience at UMBC catapulted him to a summer internship at CalTech’s Laser Interferometer Gravitational-Wave Observatory (LIGO) Lab, a leading center for gravitational wave research. After that, he received the Gates Cambridge Scholarship, a younger version of the prestigious Rhodes Scholarship, to pursue a Ph.D. at Cambridge University. Nancy Lloyd Miller ’74, political science, M.P.R. ’85, policy sciences, and the recently-retired associate director of academic and pre-professional advising, provided significant support throughout Graff’s application process, he says.

Graff’s work at Cambridge continued to focus on LIGO, this time developing software tools to analyze data from LIGO and beyond. “We were very focused on making sure any new software we developed for data analysis would be generally applicable,” Graff says, “and that other people would be able to take it and use it to solve their problems as well.”

After completing a Ph.D. in physics at Cambridge, Graff continued his LIGO work at NASA Goddard Space Flight Center in Greenbelt, Maryland. In 2015, he transitioned to the Johns Hopkins Applied Physics Laboratory, where he is working primarily on projects for the U.S. government.

Graff’s years at UMBC, which also included involvement in student government and Greek life, provided the foundation for his success. “UMBC prepared me for the Gates [Scholarship] to get me to Cambridge, and […] set me on the path that I’m on now,” he shares. “It was one of the important steps on the way.”

The award, Graff says, “is a real honor. I hadn’t expected it. Now I just hope I can continue to live up to it, so that I’m not just an outstanding young scientist, but can continue to do good work in the future.”