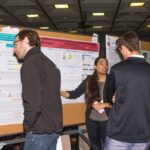 This fall, hundreds of students from across the East Coast gathered to present their research and compete for awards at UMBC’s Undergraduate Research Symposium in the Chemical and Biological Sciences (URS). Fifty-two of the student scientists attend UMBC and participate in a program designed to provide research opportunities to a broad range of students in STEM and boost their confidence, increase the likelihood they pursue STEM graduate degrees, and set them on a path to success.

The program is UMBC STEM Building Infrastructure Leading to Diversity (BUILD).  Eight BUILD students won awards, which is a good sign for the effectiveness of this relative newcomer among UMBC’s cohort programs. UMBC is one of 10 lead institutions on the STEM BUILD initiative nationwide and received $18 million from the National Institutes of Health to launch it in 2014 with the goal to “create a national model of comprehensive support to expand and increase the success of students in STEM.”

“The BUILD participants at URS exemplify the objectives of the program,” says Laura Ott, STEM BUILD active learning coordinator and director of UMBC’s Science Education Research Unit. All BUILD participants complete summer research, either in opportunities they arrange themselves or in small groups on campus organized by the program. BUILD students also receive financial support and extensive academic advising.

STEM BUILD is also a scientific study, so participants’ progress is carefully tracked to try to tease out which supports have the biggest impact on student success. “By participating in the BUILD program, they’re helping us explore novel strategies to increase participation in undergraduate research for all students,” Ott says.

“Ms. Kowalewski was able to get me to step my game up and allowed me to see what I was capable of,” Arafat shares. “If you ever had questions or were having trouble,” Danaila says, “they were there.” The mentors “allowed us to relay ideas back and forth with people who had much more experience and knowledge than us,” adds Sharma.

Presenting at the symposium had benefits, too. “It allowed me to explore fields of research that may interest me, and also helped me improve my presentation and research methods,” Sharma says. Thompson appreciated the opportunity to speak with students from other schools. “I was interested in how they got into their labs and what it was like for them in a different lab environment,” she shared.

“I felt that my role in mentoring the students was not only to teach them the laboratory skills, but to help them grow as scientists and researchers,” Kowalewski says. She was impressed by their rapid progress in the content-intensive program. “The fact that they were able to understand the information and present it well enough to win an award at URS was a testament to all of their hard work,” she says. Overall, the summer experience under Kowalewski’s tutelage is intended to build the students’ proficiency in a wide range of scientific techniques and prepare them for independent research opportunities.

Temiloluwa Okusolubo ’19, biological sciences, and Ifeoma (“Fefe”) Azinge ’19, biological sciences, are in their second year of BUILD participation and both earned first place in their biochemical and molecular biology groups at URS for independent research. Okusolubo studied the folding of serpin proteins, which are implicated in various diseases related to lung function, at the University of Massachusetts Amherst. Azinge’s research at the National Institute on Aging in Baltimore focused on calcium transport in sweat glands, which is critical for temperature regulation.

Okusolubo and Azinge’s successes are the kind of outcomes that UMBC STEM BUILD hopes to facilitate, using systems that other schools can eventually adopt. Ott is proud of the students in the program, she says, “and I have high hopes for where they’ll go in the future.”