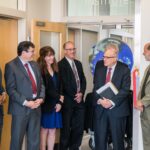 The institute includes a prototyping lab, operations center, and offices, but it is also much more than a collection of rooms, explains Karl Steiner, UMBC’s vice president for research. The ESI is a physical home for the interdisciplinary earth and space science UMBC researchers do with support from NASA, NOAA, and other federal agencies as well as collaborators around the world. It’s a hub where scientists, engineers, and students will take UMBC’s earth and space research to the next level.

The ESI, administered by UMBC’s College of Natural and Mathematical Sciences (CNMS), joins a set of other distinguished UMBC research centers, including the Center for Space Science and Technology (CSST), Goddard Planetary and Heliophysics Institute (GPHI), and Joint Center for Earth Systems Technology (JCET), all of which are collaborations with the NASA Goddard Spaceflight Center in Greenbelt, Maryland.

CNMS Dean Bill LaCourse believes NASA has served as “a role model and inspirational force,” that has led people to reach for the stars for generations, and he is excited to expand UMBC’s collaborative work with NASA. “The Earth and Space Institute is our opportunity to reach for new heights,” he shares. “To take that chance in the name of science, commitment, passion, and basic human curiosity.”

At a ribbon cutting for the new space, leaders from the three other centers, as well as the director of NASA Goddard, gathered to discuss current projects and ideas for future collaborations. They emphasized the strong and ongoing relationship between UMBC and NASA, which is only expected to deepen with the dedication of the new institute.

“It’s great to be here. The partnership with UMBC is just fantastic,” said NASA Goddard director Christopher Scolese. “All this happens because of the strength of your work, and we should say thank you to all of you,” added UMBC President Freeman Hrabowski, speaking to the scientists in the room. “It takes researchers to produce researchers.”

Vanderlei Martins, professor of physics and director of the new institute, describes the ESI as a place “to develop new technologies and new science in earth and space fields.” Martins is currently working on HARP, a CubeSat mission intended to launch within the next year. But he and other UMBC scientists have their eyes on an ever bigger goal: a full-blown NASA mission with their equipment on it. The ESI will make planning and successfully proposing such a mission a real possibility.

Another important aspect of the institute is its role as a platform to boost collaboration across disciplines. “We want to collaborate even more with Goddard on the engineering side, on the science side, on the education side,” says Martins, noting that this could mean pulling in faculty and students at all levels and from a broad range of focus areas.

Jane Turner, director of CSST, shares that “one of our important roles is to connect our graduate and undergraduate students to mentors and project opportunities at Goddard”—a goal the new ESI shares. Lorraine Remer, a JCET research professor, adds that recruiting UMBC students to careers at NASA or other federal agencies via experiences with UMBC collaborative centers could also play a role in diversifying the federal workforce, because of UMBC’s strong track record for supporting the success of students from all backgrounds in STEM fields.

Alan Yeakley, chair of geography and environmental systems, also envisions opportunities for the ESI to utilize the social sciences in its work. “I see geography and environmental science as the connective tissue between the natural sciences and the social sciences,” he shares. Data collected by NOAA satellites, for example, can contribute to public health research on air quality, urbanization, and the effects of climate change.

The ESI is intended to bring the UMBC community together in new ways, just as it came together to support the institute’s creation. “It takes a community—a wide spectrum of people giving support from all kinds of directions—to bring something like this together,” LaCourse says. From the crews that renovated the space to university administrators at the highest level, “There has been cross-campus support… This is a university facility that was a feat to get off the ground, and now it’s here.”

“The Earth and Space Institute leverages our resources and expands our potential,” LaCourse says. Inspired by NASA, “it allows UMBC to dream bigger and reach higher.”

All photos by Marlayna Demond ’11 for UMBC.