Belay Demoz, director of JCET and leading climate scientist, elected as a fellow of the American Meteorological Society 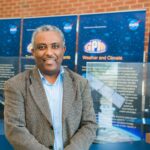 Belay Demoz has been part of UMBC’s Joint Center for Earth Systems Technology (JCET) since its founding more than 20 years ago, and has been serving as its director since 2014. In his decades as a climate scientist, he’s published countless scientific papers, organized dozens of professional conferences, and has become known as a dedicated mentor committed to fostering a more inclusive culture in meteorology. This year, Demoz adds to his long list of professional accolades a notable new honor: election as a fellow to the prestigious American Meteorological Society (AMS).

Demoz grew up in Eritrea at a time of significant drought, famine, and conflict. As one of few Eritreans to receive the opportunity to earn an undergraduate degree, he became determined to use his education to make a difference for his country. “Hardship is the greatest teacher,” he shares.

After obtaining his bachelor’s degree, Demoz read an article about cloud seeding, a form of human-directed weather modification typically intended to induce rain and snow. Then, he saw an advertisement for a graduate program in physics at University of Nevada-Reno, and a lightbulb went off in his mind. He applied, was accepted, and in 1986, after his family put up their home as collateral to enable his exit, he departed Eritrea for graduate school in the United States.

In his distinguished career, Demoz has led several major scientific projects, such as the International H2O Experiment (IHOP) in 2002, which collected measurements of water vapor and other particles in Earth’s atmosphere, and documented characteristics of cirrus clouds, wispy high-altitude clouds whose role in climate is still poorly understood. Demoz also continues to lead the Plains Elevated Convection at Night (PECAN) project, a collaboration between NASA, the National Oceanic and Atmospheric Administration, the National Science Foundation, and the Department of Energy that seeks to understand nighttime, warm-weather precipitation over the United States’ Great Plains and similar environments.

Currently, Demoz is involved with a project that collects climate data from a global system of weather balloons known as GRUAN. The only university-run station is in Beltsville, Maryland—a collaboration between Howard University and UMBC. Demoz, who was previously professor and director of graduate studies in the department of physics and astronomy at Howard, continues to collaborate with the university and attends most of the station’s weekly balloon launches.

While Demoz’s research focus has shifted over the years, his dedication to supporting fellow researchers, especially students and junior faculty from underrepresented groups, has never wavered. He especially enjoys the combined educational and research orientation of the center he directs, JCET, which is a collaboration between UMBC and the NASA Goddard Space Flight Center in Greenbelt, Maryland. “JCET is unique because of its educational focus,” Demoz shares. “I’ve always believed in the goal of JCET to connect scientists and students.”

As a scientist who recalls the experience of being one of very few people of color to attend professional conferences in his field, Demoz is also proud to see climate science become increasingly diverse and inclusive. A new collaboration between UMBC, NOAA, Howard, and the City University of New York, funded last fall through NOAA’s Educational Partnership Program with Minority-Serving institutions, will encourage even more supportive connections between students and climate scientists from a wide range of backgrounds. Demoz is excited to see this new partnership take off, and would like to see more multi-agency collaborations that bring students and professional scientists together.

“Belay Demoz epitomizes inclusive excellence in all aspects of his being, demonstrating his exemplary character in his roles as director of JCET, professor of physics, and informal mentor,” shares Bill LaCourse, dean of the College of Natural and Mathematical Sciences, which administers JCET. “The college and his colleagues are very proud of him, and we are fortunate that he is a member of the UMBC community.”