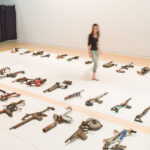 “This body of work is my personal awakening to the American obsession with weapons and the abstraction of violence,” says Hess. Taking discarded bits of things (“rescued” objects, he calls them) that most people would consider trash — a vacuum cleaner, the handle of a saw, an old black sneaker, a pink Barbie bike frame, a raggedy crutch, the body of an electric guitar, a turquoise sewing machine — Hess fashioned strikingly realistic-looking “guns” for exhibition, to prompt conversations about violence in America.

Hess’ work came to the attention of Kathy O’Dell, special assistant to the dean for education and arts partnerships, and associate professor of visual arts, art history and museum studies, who has organized an exhibition, simply titled Gun Show, of all 112 of Hess’ gun sculptures at UMBC’s Center for Art, Design and Visual Culture, opening on September 4 and continuing through October 14. An opening reception with the artist will be held on Thursday, September 7, from 5 to 7 p.m.

The exhibition displays the sculpture on the floor, laid out on tarpaulins, recalling the presentation of bodies awaiting identification following disasters, or the arrangement of confiscated weapons at police headquarters. Ranging in weight from 8 to 44 pounds, the mock guns include no shooting mechanism.

“The reason I felt strongly about convincing David Hess to hold this exhibition at UMBC is that it’s a research institution,” says O’Dell, “and research is what has driven David’s entire project, starting in the early 1990s through the present: What is a gun? What does it mean to hold one? What does it mean to make one? Who does or does not own them? Who should or should not own them? What are sensible reasons and safe ways to use them? What are the ramifications of their use or misuse? How do issues of race, class, gender identity, and age impact these questions?”

O’Dell continues, “Research is about asking questions and then attempting to answer them — as individuals and as groups working together to make sense of the world and to advance thinking.”

O’Dell notes that the power in Hess’ use of “rescued” objects is their familiarity. “Every object fits into a story with which each viewer can relate,” she says. “Yet each story is personal. A Barbie bike seat will have a different meaning to me than it will for a young man whose sister had a bike like that. Contemplating a personal story leads to contemplating one’s personal position on what the bike seat has been made to represent — a gun. The ‘rescued’ objects allow us to ‘rescue’ memories and, on the basis of memories, build thoughts and positions in the here and now.”

David Hess’ work has been exhibited at Goya Contemporary in Baltimore and the John Elder Gallery in New York. His work can be found in numerous private and public collections, including the American Visionary Art Museum, Baltimore/Washington International (BWI) Thurgood Marshall Airport, Johns Hopkins Hospital, Sinai Hospital, Montgomery College, Kaiser Permanente, and the Emerson Corporation in St. Louis, Missouri. In addition, he has completed over twenty public art commissions in and around Baltimore, Rockville, and Germantown, and Washington, D.C.

Kathy O’Dell, curator of Gun Show, teaches and writes on modern and contemporary art, with a focus on performance and global art. The author of Contract with the Skin: Masochism, Performance Art, and the 1970s (University of Minnesota Press, 1998), she has published numerous articles and reviews in Art in America, Artforum, Performance Research, TDR: The Drama Review, Women & Performance, and other journals. Currently, she is writing a book titled The Dot: A Small History of a Big Point and is co-writing, with Duke University Professor Kristine Stiles, a survey text titled World Art Since 1933. She serves on the Board of the Greater Baltimore Cultural Alliance and the Maryland State Commission on Public Art.

All photos by Marlayna Demond ’11 for UMBC except detail of sculpture courtesy of Geoff Graham.