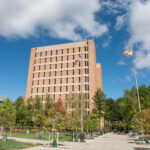 The Association of American Colleges and Universities (AAC&U) has selected UMBC as one of 10 institutions nationwide to participate in a bold, new initiative designed to “educate, prepare, and inspire the next generation of leaders to advance justice and build equitable communities.”

Participating colleges and universities will establish Truth, Racial Healing and Transformation (TRHT) Campus Centers to engage campus and community stakeholders around issues impacting racial equity, such as conscious and unconscious bias. AAC&U President Lynn Pasquerella shares that this is the first piece of a broader vision “to ensure that higher education is playing a leadership role in promoting racial and social justice” through a future national network of 150 such centers.

Frank Anderson, assistant director of The Choice Program at UMBC, coordinated UMBC’s TRHT proposal, with support from Zeevelle Nottingham-Lemon, associate director. The Choice Program has served more than 25,000 youth from Maryland’s most underserved communities for nearly 30 years, providing 24/7 wrap-around support. The program is based in UMBC’s Shriver Center, which works to realize the vision of Eunice Kennedy Shriver and Sargent Shriver to mobilize higher education to confront and solve major challenges facing urban America today.

“The Shriver Center’s Choice Program at UMBC recognizes that now, more than ever, there exists a need to create platforms for Baltimore City youth, UMBC service-learners, and our communities to voice their truth about systemic racism, and to seek opportunities for transformation,” says Anderson.

UMBC’s proposal focuses on the Shriver Center’s service-learning and community engagement work with youth, artists, advocates and community-serving organizations in and around Baltimore. It also incorporates plans for youth-led community conversations, at UMBC and in Baltimore, around racial equality and transformation. The $30,000 AAC&U grant will support The Choice Program’s Youth in Action group, which unites students and service-learners at UMBC with youth in Baltimore through art and social justice, and college night programming for Baltimore City school students, among other activities.

“Youth are often the most affected by social justice issues, but the least represented when solutions are sought,” says Anderson. He suggests that UMBC is in a strong position to elevate their perspectives, experiences, and ideas given the university’s history of youth mentoring and organizing through The Choice Program, as well as robust partnerships in Baltimore City Public Schools and other youth-serving organizations.

Across the country, 125 institutions applied to participate in this first cohort of TRHT Campus Centers. UMBC is joined by Brown University, Duke University, Spelman College, Rutgers University, and other innovative institutions on the list of 10 sites selected to launch the program’s first stage.

“We are honored that UMBC has been selected to help launch this new national program. Our university is dedicated to open inquiry and understands that the diversity of our community is one of our greatest strengths,” says President Freeman Hrabowski. “Preparing today’s young people to serve as the next generation of leaders in creating a more equitable society is core to our mission as a civically-engaged public research university.”

Featured image: Administration Building and flags at the main entrance to UMBC. Photo by Marlayna Demond ’11 for UMBC.