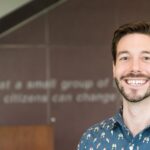 My “weaknesses” of coming from poverty, having a single mother, having a disability, and being a member of the LGBTQIA community have and always will be my strengths. UMBC helped me realize that.

Coming from a single parent family living under the poverty line, William Klotz often felt like he “wasn’t meant to be in college and…couldn’t succeed,” but at UMBC Klotz came to see his personal experiences and identity as strengths, drawing from them a sense of resilience and drive, and recognizing the value of his unique perspective. Now, Klotz—who earned his bachelor’s degree from UMBC in 2014—is not only graduating with an advanced degree, but also planning to teach abroad through the prestigious Fulbright program.

William Klotz says he came to UMBC without a clear path, but is “leaving ready to take on anything.” Photos courtesy of Klotz.

In his years at UMBC, Klotz has excelled as a student leader as well as in his studies. He has taught Introduction to an Honors University seminars for freshmen, received research grants, choreographed a major dance piece, and served as a STRiVE student leadership coach.

In addition to being a Fulbright-Garcia Robles finalist, he is a Homer and Martha Gudelsky Scholar, completed a summer research fellowship in comparative literature at UC-Irvine, and received an Alliance for Language Learning and Exchange grant in Chinese at Washington University in St. Louis.

After graduation, Klotz plans to move to Mexico to teach for the Secretaría de Educación Pública for the 2017-18 academic year.