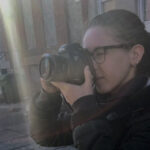 An ambitious and moving photography project by UMBC student Amy Berbert ’17, visual arts, has captured the media’s attention for its powerful impact on audiences across the Baltimore-Washington D.C. region.

Berbert began taking photographs at crime scenes in Baltimore City last year with the goal of bringing visibility to the traumatic impacts of violence on people and communities. After exhibiting some of these photographs in the Montgomery County suburbs around Washington D.C., just 40 miles from the Baltimore neighborhoods she was photographing but distant in many ways, she gained a greater understanding of the potential of her images to tell powerful stories and build connections. She soon set out with a new, much larger, vision: to use photography to memorialize every single person who was a victim of homicide in 2016 in Baltimore.

Berbert has been posting photographs of the project on the Instagram feed @stainsonthesidewalk, describing it as, “An Exploration of Homicide in Baltimore City. Same Day. Same Time. Same Place. One Year Later.”

It is her Instagram sharing that launched a recent flurry of media attention on the project. Though just begun at the start at 2017, the series has been featured by SPIN, the Baltimore Sun, and ABC2 News in the past week.

The photographs “are respectful of the people involved,” she told Mary Carole McCauley in the Baltimore Sun. “They don’t judge anyone. It’s just a moment of silence to remember these people, and the fact that they lived and died in that place.”

In an interview with Skyler Henry from ABC2 News, she explained, “I want to give them more of a legacy than just a couple lines in an article.”

“Amy’s project places her right in the middle of a very real and pressing issue in Baltimore, namely, its high murder rate. The media attention will I think lead to more awareness and dialogue about the issue, as well as paying tribute to the individuals who were killed,” says her professor Lynn Cazabon.

She noted, “The media coverage also shines a light on a great example of the type of unique…work that UMBC visual arts undergraduates are engaged in.”

As her undergraduate thesis project, Berbert’s photography will be displayed in the 2017 Visual Arts Senior Exhibition at the Center for Art, Design and Visual Culture (CADVC) from May 23 through June 9. That exhibit will conclude her college career, but she is dedicated to continuing the rigorous project through the end of the year, planning her life in 2017 around the lives that were lost in Baltimore in 2016.

“I personally prefer to stay behind the camera, so the media attention has been a bit overwhelming but it is worth it,” says Berbert. “I hope that the victims I am memorializing are the ones who get the attention rather than myself,” she continues, explaining her goal to inspire both empathy and action.

By focusing on increasing awareness of lives lost through violence, Berbert hopes to encourage others to engage with and support communities facing challenges. She shares, “As a community we need to educate ourselves and others about the root causes of violence…and then we need to take action. We need to volunteer with programs that are working to make a difference in these communities.”

The broader impacts of Berbert’s work aren’t yet fully realized, but she’s already felt the project’s effects on herself. As she told the Baltimore Sun, “Before I started working on this project, I knew I had stereotypes. But, every time I go out I’m faced with them. I don’t know if this project is going to change anyone else. But, I think it’s changing me.”

See coverage in the Baltimore Sun and SPIN, and on WMAR/ABC2NEWS.