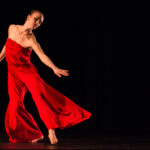 These works will appear on stage February 9–11. Integrating innovative sound and visuals through collaborations with artists such as Nohe, professor of visual arts, they reflect the company’s deep commitment to an interdisciplinary approach.

Baltimore Dance Project is a professional modern dance company dedicated to presenting the creative work of Doug Hamby and Carol Hess, professors of dance at UMBC who are described as “two of the most exciting choreographers in Maryland.” Formed in 1982 under the name Phoenix Dance Company, the company is known for its edgy collaborations with composers, directors, sound artists and visual artists, and for infusing visual media and technology into riveting dance performance. The company features outstanding professional dancers and has been honored with numerous grants and awards. Hamby, Hess, and company veteran Sandra Lacy have received a total of twelve individual artist awards from the Maryland State Arts Council, and their work has appeared in theaters and film festivals across the United States.

Complete performance information and tickets are available through the UMBC Arts & Culture Calendar.