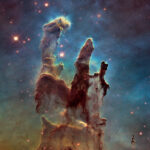 Experts from National Geographic, NPR, and other national leaders in the arts, humanities, and sciences connected by webcam last week to discuss a series of ten powerful images for “How Science is Pictured in the Media and Public Culture.” UMBC and Reading the Pictures jointly produced the panel as part of the year-long Seeing Science project, which explores the role photography plays in shaping, representing, and furthering the sciences.

To prepare, explains Marvin Heiferman, Seeing Science curator at UMBC, “Meg Handler, editor-at-large at Reading the Pictures, and I spent a couple of months looking at the year’s worth of photographs that appeared in magazine articles and online pieces about the sciences to…see the various ways, from stock photography to photojournalism, that the sciences were represented.”

The series of ten images they discussed represented a broad range of science disciplines, were visually distinct from one another, and varied in their goals and purposes. Together, Stormer argued, they demonstrated how “science becomes visible to us when science is helping us see things —that is when it becomes apparent to us that we depend on it, live within it as much as we do.”

The conversation began with a colorful and formally engaging photograph of a massive general-purpose detector within the Large Hadron Collider at CERN, in Switzerland. Subsequent photographs included a new view of the Pillars of Creation from the Hubble Space Telescope; a human embryo being modified; four women from NASA’s most recent astronaut class; the early 20th century Chart of Physical Traits alongside photographs of faces overlayed with facial recognition software mapping grid points; an overhead view of a toxic algae bloom in Florida; a 4-month-old baby with microcephaly, published during the Zika outbreak; President Obama with a boy and his marshmallow cannon at the White House Science Fair; and two visitors wearing virtual reality gear at The Void in Times Square.

The depth and spectrum of the panelists’ expertise created a fascinating discussion that began with initial emotional and intellectual responses to the images and quickly delved into, as Adelman described, “how the photograph acts as a visual metaphor for how science gets communicated to audiences of non-scientists.”

“What was interesting and revealing to me was to listen to the various ways people with different relationships to science and imaging looked at and responded to the images discussed,” says Heiferman. “Since Seeing Science is an interdisciplinary look at how images function, that variety of responses is what gives a discussion like the one we had its depth and richness.”

Melissa Cormier ’17 M.F.A., intermedia and digital arts, tuned in to the event from the on-campus viewing party hosted by UMBC’s Center for Art, Design and Visual Culture (CADVC.) “My current thesis work deals with co-opting traditionally scientific aesthetics and methods of display and observation, so it was an opportunity to witness how those types of images are spoken about and discussed by the various panel members,” says Cormier.

Reflecting on the live chat function of the Google HangOut, Cormier shares, “It was a great experience to be able to interact with such a distinguished panel and feel included in the conversation. It also gave me some new research avenues to pursue in my work, as well as affect the language I will use to discuss my work.”

Reading the Pictures’ salon archive now features in slideshow format the ten photographs that formed that backbone of the event. A video of the discussion is available on YouTube.

Through #SeeingScience, readers can also explore fifty additional media images that Reading the Pictures featured on Twitter and Instagram in the weeks leading up to the event.