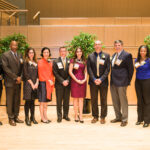 The UMBC community gathered in the Linehan Concert Hall on October 6 for a moving ceremony to honor the profound impacts and achievements of nine outstanding Retrievers at the 2016 UMBC Alumni Awards.

“This year’s awardees truly capture the depth of our community,” said John Becker ’01, president of the alumni association. Irina Vishnevetsky ’99, chair of the alumni awards committee, shared, “Each year the number of submitted nominations grows, and each year I am amazed by the incredible accomplishments of UMBC alumni.”

Today, Calhoun serves as one of the youngest distinguished professors at the University of New Mexico. His primary appointment is in electrical and computer engineering, and, known for his interdisciplinary work, he maintains affiliate appointments with biology, computer science, neuroscience, and psychiatry. In accepting the award, Calhoun emphasized the importance of imagination in scientific research and told the students in the audience, “honesty and integrity in your work will make it endure over the long term.”

Award recipient Ian Ralby ’02, modern languages, linguistics, and intercultural communication (MLLI) and M.A. intercultural communication, was a Humanities Scholar and varsity diver at UMBC, and graduated as valedictorian. He went on to earn a law degree at the College of William and Mary and M.Phil. and Ph.D. degrees at the University of Cambridge, before founding I.R. Consilium, a consultancy that advises governments on international law and policy.

Ralby credits his UMBC humanities education for much of his success in international negotiation, remarking, “I learned to pick up on the subtleties of human interaction, in my own culture and across cultures.” He noted that those skills have “frequently been the deciding factor in whether my work has been merely technically proficient or truly successful.” Thomas Field, MLLI, presented Ralby’s remarks, as he was in Finland at an international maritime security conference and unable to return to the U.S. for the ceremony.

Philip Farabaugh, biological sciences, introduced natural sciences awardee Henry Baker ’78, Ph.D. ’84, biological sciences, who serves as Hazel Kitzman Professor of Genetics, professor of surgery, and chair of molecular genetics and microbiology at the University of Florida College of Medicine, and associate director of the University of Florida Genetics Institute. Farabaugh praised Baker for making the “courageous decision” to change the course of his research when “he recognized the clue to understanding human disease lay in determining how people’s genes change during disease.”

Baker, a Catonsville native, has been proud to watch UMBC grow over the years. “UMBC has truly excelled since its beginning in 1966 up to today, and is headed on to an even higher trajectory,” he shared. “From UMBC, you can get anywhere.”

Social and behavioral sciences awardee Ruby Lu ’94, economics, traveled from Beijing to attend the awards ceremony. After earning a master’s degree in international economics from Johns Hopkins, she co-founded DCM China, a Beijing-based venture capital firm. She has been named one of the top 50 venture capitalists in China by Forbes magazine, 2011–15. Her approach to venture capital is “to invest in companies she thinks will use technology to bring about positive change to society,” shared her nominator, David Mitch, professor and chair of economics. Lu, who came to study at UMBC from China, was a member of the university’s first class of McNair Scholars and reflected on how faculty profoundly impacted her life as teachers, mentors, and friends, at a time when she was far from home and working hard to learn English while preparing for a career.

LaMar Davis, director of The Choice Program at UMBC, referred to this year’s alumni award winner in social work as “a legend.” “If you don’t know who Joe Jones is,” he said, “you’re likely from out of town.”

Joseph Jones, Jr., ’06, social work, founded the Center for Urban Families in Baltimore City in 1999. The organization has served more than 26,000 Baltimore residents through workforce development and other initiatives, and has placed more than 6,400 in full-time jobs. Jones didn’t intend to get a college degree, but that changed when he met President Hrabowski. At UMBC, Jones shared, he developed “the ability to think about how do we create institutions, how do we move systems forward, how do we agitate in a way that creates change?” That reflection has dramatically benefited the people of Baltimore, shard Davis, noting that through his “steadfast belief and unrelenting drive” Jones has “transformed tens of thousands of lives with impacts that will be felt for generations.”

Tiffany Holmes, MFA ’99, this year’s awardee in visual and performing arts, is now the dean of undergraduate studies at the School of the Art Institute of Chicago. Holmes began her career as a middle school art teacher in Baltimore City and brought her students to tour UMBC’s Imaging Research Center. There, she recalled, “I quickly realized that I was interested in using technology to make art.” After over a decade in the field, she has made a “permanent mark on the canon of this once marginalized and little-understood discipline” and she is known for her “commitment to art that poses unique social challenges,” shared her nominator, Lisa Moren, professor of visual arts.

Ellen Hemmerly, executive director of bwtech@UMBC, was thrilled to introduce Tom Sadowski ’89, political science, as the 2016 Distinguished Service awardee. Sadowski, vice chancellor for economic development for the University System of Maryland, “has always valued relationships and supported partnerships, and has a knack for bringing people together and making things happen,” says Hemmerly. “I believe with Tom at the helm, UMBC and other system campuses will lead the nation in supporting innovation and creating knowledge jobs of the future.”

Accepting his award, Sadowski shared that he’s “just a guy who likes to…help solve problems, help people work as a team and achieve collective goals, or simply help people find that better part of themselves and grow.” Sadowski said that he’s particularly valued his relationship with the university over the past three decades because “UMBC leads its students to believe in themselves, and further, to believe there is nothing they cannot accomplish within themselves and within their communities by working together, with passion, and a deep, heartfelt purpose.”

Judah Ronch, dean of the Erickson School, introduced Galina Madjaroff ’08, psychology, M.A. ’11, aging studies, as the Rising Star awardee. Madjaroff serves as undergraduate program director and clinical assistant professor in the Erickson School, whose undergraduate program has grown from almost 400 in 2011 to almost 1,900 today. Ronch noted, “This is really due to the passion, hard work, leadership, and vision that Galina has brought to the program.” In particular, “Her passion is to help society and our students understand the major issues in cybersecurity and tech use for older people,” which has led her to pursue a Ph.D. in human-centered computing at UMBC. Madjaroff says UMBC is special because of the “faculty who are so nurturing, who reach out and take that extra step,” and she is driven to be that supportive mentor to current and future students.

The alumni association honored Kimberly Moffitt, professor of American studies, with the outstanding faculty award for 2016. “Everyone deserves a Dr. Moffitt—someone who shows them the goodness of the world while asking essential follow-up questions to ensure that they never get complacent,” shared her student, Ngeri Nnachi ’11, American studies. “I consider myself blessed to have such a strong, gifted, beautiful woman as my role model.” Accepting her award, Moffit emphasized, “I want to make sure my students know they have voice. And no matter what space they walk into, their voice matters. They matter.”

This focus on impact, commitment, and connection emerged again and again throughout the evening, and for good reason, shared President Freeman Hrabowski. “One measures the impact of a university by the research it produces, the questions it asks, the people who are graduates, and what they do,” Hrabowski said. “People you see on this stage are not just amazingly talented, they are good people who have done great work. I can’t think of anything an educator would want more than that: People who care about others, who strive for excellence, and who never, never, never give up.”