In groundbreaking move, NEH extends tour of acclaimed exhibit “For All the World to See” 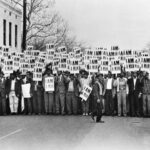 For the past five years, For All the World to See: Visual Culture and the Struggle for Civil Rights, an exhibition organized by UMBC’s Center for Art, Design and Visual Culture (CADVC) in partnership with the Smithsonian National Museum of African American History and Culture, has traveled the nation through the National Endowment for the Humanities’ NEH on the Road program. Now, the NEH has extended the exhibition’s tour for an addition five years, marking the first time that the NEH on the Road program has doubled to ten years a tour period for an exhibition.

Through a host of media— including photographs, television and film, magazines, newspapers, posters, books, and pamphlets — the project explores the historic role of visual culture in shaping, influencing, and transforming the fight for racial equality and justice in the United States from the late-1940s to the mid-1970s.

The NEH on the Road version of the show opened in Kansas City in April 2012, and has toured to more than 20 venues since then, including stops in Chattanooga, Tennessee; Wilmington, North Carolina; Richmond, Virginia; Las Cruces, New Mexico; Eu Claire, Wisconsin; San Antonio, Texas; and Wichita, Kansas.

…the role of the National Endowment for the Humanities, as the principal funder of For All the World to See, has been extremely important. But no more so than its support of the NEH on the Road version of the exhibition. By allowing the show to travel across the United States, to more than 50 venues, the NEH will also allow its novel ideas about the civil rights movement to reach many more people.

So much research and writing about the modern civil rights movement — and so many exhibitions — have focused on photography or have ignored visual culture completely. The NEH on the Road version of For All the World to See will help thousands of new visitors to understand the powerful role that visual media — including film and television, graphic art and posters, advertising, photography, and even toys — played in altering prevailing ideas about race in America. By 2023, more than a million visitors will have seen both iterations of the show.