UMBC’s 2016 Fulbright Scholars to serve as teachers and researchers around the world, from Moldova to Malaysia 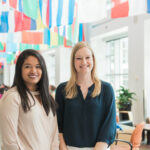 After class one day in 2015, Brigitte May, senior lecturer in German, turned to her student, Matthew Kelly, to talk about his plans for after graduation. “Matt, I know what you are going to do when you graduate,” she told him. “You are going to win a Fulbright grant and teach English in Germany.” A year later, Kelly is heading to Germany with an English Teaching Assistantship Fulbright award.

“What I loved about this year’s class is that they threw themselves into the process early,” says Brian Souders, associate director of international education services and Fulbright program advisor. “They really got into the spirit of Fulbright, which is all about cultural exchange.”

The Fulbright Program is the flagship international educational exchange program sponsored by the U.S. government and is designed to build relations between the people of the United States and the people of other countries that are needed to solve global challenges. The Fulbright Program is funded through an annual appropriation made by the U.S. Congress to the U.S. Department of State. Participating governments and host institutions, corporations, and foundations around the world also provide direct and indirect support to the program, which operates in more than 160 countries worldwide.

Rettaliata is using her Fulbright research grant to study public monuments in Moldova and how they represent the evolution of the country’s national identity through its pre-Soviet, Soviet, and post-Soviet history. She plans to apply research skills she developed as an undergraduate to make the most of her research abroad.

“I really think that UMBC’s history department has prepared me for the Fulbright grant,” explains Rettaliata. “Through various coursework, I’ve been able to research in archives, databases, and pursue oral and digital history projects…there are so many different areas that I’ll be able to translate into my research in Moldova.”

Gujaran is the second UMBC Fulbright recipient for Australia. Timothy Nohe, professor of visual arts and director of the Center for Innovation, Research, and Creativity in the Arts (CIRCA), received a Fulbright Senior Scholar award in 2006 to Australia to teach at University of Wollongong.

Gujaran will use her research grant to study antibiotic drug resistance at the University of Melbourne’s department of microbiology and immunology. She credits her experiences pursuing civic engagement opportunities through The Shriver Center and Honors College with inspiring her to become a well-rounded researcher, dedicating her time to help improve access to healthcare for people who need it the most.

“I want to focus on infectious diseases because I really want to work with international populations, specifically in developing countries that might not have access to healthcare,” says Gujaran.

Humanities scholar Matthew Poissant is hoping to build off of his study abroad experience in South Korea as he pursues his Fulbright ETA teaching English to 10th and 11th grade students in Indonesia.

“I feel very honored to have been chosen by my government to be a cultural representative of the United States,” he says. “Because of what I learned from my American studies education at UMBC, I am not scared to have discussions about the complexity of American culture and identity.”

Matthew Kelly will be teaching English at a school in Bavaria, Germany and hopes to embrace the cultural exchange component of the Fulbright program through community service work coaching ice hockey in Munich.

Reflecting on this year’s Fulbright class, Souders is confident the students will embrace cultural exchange, serve as positive ambassadors of the United States, and bring back a breadth of knowledge and experiences to their professional lives when they return to the U.S.

After guiding so many students through the Fulbright experience, what is Souders most excited about for this year’s recipients? It’s not just about their time abroad, he shares. “I love the fact that the students are developing skills that will be useful for the rest of their lives.”