Researchers across disciplines gather for vital conversation about academic freedom 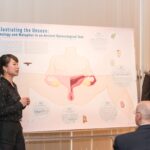 UMBC students, faculty, and staff gathered on May 12, 2016, to honor the work of two accomplished emerging scholars and to engage in a vibrant discussion on academic freedom and the display and interpretation of research.

Their work became the center of a campus-wide conversation on academic freedom in late April after the poster was moved to a less prominent location shortly before Undergraduate Research and Creative Achievement Day (URCAD), with nearby signage stating, “Certain research posters may contain content that may be inappropriate for children under the age of 17.”

President Freeman Hrabowski responded to apologize to the students and affirm university support for their academic work. Scott Casper, dean of the College of Arts, Humanities, and Social Sciences, and Diane Lee, vice provost and dean of undergraduate education, then organized a special campus event to discuss “the nature of artistic, humanistic, and scientific research and representation; the presentation of research to academic and public audiences; and the meaning and centrality of academic freedom.”

Several UMBC faculty members joined the students in a panel discussion to reflect on the issues that their poster and response to it during URCAD have raised for UMBC’s research community; the context of how research on reproduction, gender, sexuality, and women’s bodies has been interpreted over time; as well as positive steps the university administration and community can take to ensure that the academic freedom of student researchers is fully supported in the future.

Wang and Auer’s research is connected with “Seeing Science,” a new initiative of the Center for Art, Design, and Visual Culture (CADVC) to reveal and advance connections between the visual arts and the sciences. Their research project examined gynecology from ancient Greek texts with a focus on Soranus’ studies about female reproductive organs. The work combined text, illustrations, and design to create an artistically interpreted visual representation to help contemporary readers understand the ancient texts without losing their original content.

“Why did we chose to hold on to medical terms that are thousands of years old?” asked Auer, during her research presentation at the forum. “I wanted to understand what terms were used…and what allowed us to develop the terms and continue their usage.”

Addressing the decision to move her poster at URCAD, Wang explained, “if we don’t treat reproductive biology with a healthy attitude, then research and education in this field will have a difficult time moving forward. I believe that we have to provide a healthy academic environment for everyone who wants to come and learn.”

Jones-Lewis, who served as a faculty mentor to Auer, commended the students on their bravery and tenacity in addressing a research topic that isn’t often discussed in the larger cultural landscape.

“As a university that is committed to a search for knowledge and inclusive excellence…we should be conscious of these politics, we should learn to see them when they are implied in decisions, and we should learn to discuss them quite openly,” said McCann.

Freeland commented on the power of URCAD and UMBC to “build bridges” among disciplines and to create dialogue to grapple with and address significant research questions. “This exercise was one in building bridges between images and text,” said Freeland. “In a nation and a world that is so divided between belief systems and perspectives, the university stands proud in its ability to welcome those discussions and to show and teach our students the tools of how they can navigate brave spaces,” he suggested, with a nod to the UMBC Women’s Center’s influential work promoting “brave space” discussions on campus.

As an historian of modern and contemporary art, Jacob spoke about the interpretations that images generate and the public perceptions and history of responses to those images. She explained that in today’s world, where people are constantly inundated with images, if there is one that “breaks the norm,” it can evoke a more passionate response that can bring deep-seeded emotions and assumptions to the surface.

Following the panel presentations, the audience engaged in a discussion about academic freedom, the lessons learned from the incident, and next steps in moving forward to affirm the university’s support for student research in the future.

Tim Nohe, visual arts professor and director of the Center for Innovation, Research, and Creativity in the Arts, shared that for him it was also a day to recognize the importance of each generation of scholars committing actively to support the continuity of academic freedom. He was grateful to Wang and Auer, he said, for “carrying the torch” of academic freedom for generations to come.