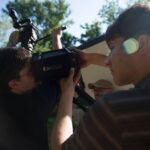 A student film project can easily fly under the radar as an “extracurricular,” until it lands the filmmaker at one of the most acclaimed international film festivals in the world.

Matthew “Matt” Myslinski ’17, visual arts, the writer and director of the short film Lightyears (2015), is at the 69th Cannes Film Festival this week to screen his film internationally on the French Riviera.  Professor Timothy Nohe, visual arts, notes, “Matt will be missing his final in my Sound Design class, but I think a screening at Cannes is a pretty justifiable excuse.”

Myslinski made Lightyears, with a crew of several other UMBC students collectively as Donut Guy Productions, for the nationwide 2014-15 Campus MovieFest (CMF) competition. As an award winner (Jury Award, GTA Nominee – Special Effects, and Campus Finalist) the film has already been shown in-flight on Virgin America. For the 9th year the top CMF films are also being presented at the Short Film Corner at the Cannes Film Festival.

This is an amazing opportunity for student filmmakers to show their work to thousands of attendees, network with filmmakers from across the globe, and attend workshops about the business of filmmaking. From Cannes via email Myslinski says, “It’s been such a privilege to come out and be a part of it all.”

Campus MovieFest (CMF) is the world’s largest student film festival. Students at over 30 participating colleges and universities compete, creating five-minute films in one week solely with crew from their school. Top films from the campus festivals move on to the Campus MovieFest Grand Finale competition. Lightyears was the Donut Guy group’s third submission to CMF and it competed against 23 films from UMBC.

The Campus MovieFest has really been a life-changing experience for me. The competition itself is stressful and hectic. But at the end of the day, getting it done and doing what you love with your friends in a highly creative environment like that is what makes it so special. It’s also given me the chance to meet some incredible new friends over the years, and afforded me incredible opportunities to travel and show my work at noteworthy venues…

Asked about what inspired the concept for the film, Myslinski said:

Lightyears was born out of the desire to make a science fiction film. As a student filmmaker, I try to do something different every project I do to gain experience telling a variety of different stories. I had never done a film of that genre and felt as though now was the best time to produce one. The story itself, as well as the tone, was heavily inspired by the British television series Black Mirror as well as science fiction classics like Close Encounters of the Third Kind and Fire in the Sky.

A pivotal scene in the film, likely recognizable to physics majors, was shot in the astronomical observatory atop UMBC’s Physics Building.

Myslinski says his filmmaking began with Lego, making stop motion shorts as a youngster. He gradually developed his skills and won his first film prize in a Howard County film festival open to middle and high school students.

Now working on much more complex film projects, Myslinski speaks passionately about the importance of collaborating with skilled, creative, and committed team. He shares:

I have always been gifted with an incredibly talented group of friends and associates with whom I can collaborate and produce projects…this film was no exception. I worked alongside an immensely talented team of individuals who all brought a unique craft to the table that helped bring this complex story to life. We are a collective who look to push the boundaries of what is possible in student, as well as independent, filmmaking and tell the most compelling stories possible.

Update: On June 1, 2016, The Baltimore Sun reported that Lightyears would screen at the new Columbia Film Festival.