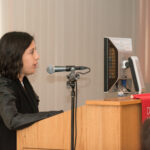 The Latin American Studies Association (LASA) is the largest professional association in the world for individuals and institutions engaged in the study of Latin America. This year, several UMBC faculty across disciplines will present their research at the 2016 LASA Conference.

The conference, which takes place in New York City from May 27 to May 30, celebrates the 50th anniversary of the association and will feature guest speakers Ricardo Lagos, former president of Chile, and Fernando Henrique Cardoso, the former president of Brazil.

UMBC faculty from modern languages, linguistics, and intercultural communication (MLLI), political science and global studies, and gender and women’s studies, are organizing panels and presenting papers at the conference.

Sara Poggio, associate professor, MLLI, is chair of the International Migrations Section of LASA and organizer of the section’s pre-conference “New York as a Global City: A Critical Perspective.” She will also present her paper “The experience of immigrant children in the United States: theoretical and methodological challenges” as part of the panel “Retos metodológicos en la etnografía de la infancia/juventud en contextos migratorios.” In addition, Poggio will be the discussant of the panel “Three Challenges to Brain Drain Theory from a Latin American Perspective: Feminization of Skilled Migration, Medical Migration and Methodological Nationalism” and chair of the panel “Understanding immigration and immigrants through the lens of time.”

Tania Lizarazo, assistant professor, MLLI and global studies, is organizer of the panel “Manufacturing violence and its aftermath: militarization and memorialization in Latin America.” As part of the panel, she will be presenting her paper “Digital Utopias: Post-Conflict Archives in Colombia.”

Thania Muñoz Díaz, assistant professor of Spanish, Latin American and Latino studies, MLLI, will present a paper titled, “Zombies, Immigrants, Detectives, and the Latin American writer in the United States: memoria narrativa in Norte (2011) by Edmundo Paz Soldán” in the panel “Siglo nuevo, ficciones nuevas.” She will also participate in the pre-conference of the International Migrations Section of LASA with the paper: “Narrative Memory and Latin American Migration in New York.”

Felipe Filomeno, assistant professor, political science and global studies, is organizer and chair of the panel “Globalizing cities, migration and the state in Latin America.” As part of this panel, he will be presenting his paper “Global Cities and Local Immigration Policy in Latin America.”