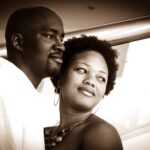 A couple of weeks ago, we put out a call on social media for couples whose love stories began at UMBC. We got so many great responses that while Valentine’s Day may have come and gone, we’ve decided to extend the holiday through Friday to share your stories on the blog. Happy Valentine’s Day the Second through Sixth!

Leah Concannon Mayer ’02, psychology, met Patrick Mayer ’02, philosophy and political science, the first month of their freshman year at UMBC, and the two were longtime friends by the time they started dating in 2003. They dated long distance while attending graduate school in separate parts of the country, and got married in 2006. They both work at Siena Heights University in Adrian, Michigan, where Patrick is an assistant professor of philosophy and Leah directs the McNair Scholars Program, and have two children. (Photo courtesy of Leah Mayer.)

Joe Fleshman ’14, economics, met his wife Kat Schuster Fleshman ’14, theatre, during their freshman year at UMBC. They started dating in early 2011 and “quickly became attached at the hip.”

“UMBC was so important to our relationship because we grew up here together. We have great memories of [H]omecomings, Quadmanias, and working with ResLife and the Commons to leave our marks on the campus. We gave everything we had to this school, and it gave us more than we could have ever hoped for in return. We were lucky to have many of our closest friends and UMBC family involved with our wedding in June 2015.

“I know I’m the happiest I’ve ever been because of the opportunities that UMBC gave us to allow our relationship to blossom,” Joe writes. (Photo courtesy of Joe Fleshman. And yes, that is Nick Offerman of Parks and Recreation and UMBC Homecoming 2013 fame.)

Stephanie Fields Lightfoot ’95, sociology, worked at the UMBC Bookstore as an undergrad, and Leon Lightfoot ’94, information systems management, was a frequent browser among the shelves. In 1993, Stephanie says, “he finally got the nerve” to approach her, and so began their courtship. A visit to the Shriver Center during her senior year led Stephanie to join the Peace Corps, a decision Leon supported “with hopes that [she] would return to him after two years.”

Indeed, when Stephanie stepped back onto U.S. soil after her service, Leon was waiting there with a ring. After 17 years of marriage and two children, Stephanie says, “If it weren’t for UMBC, there would be no Lightfoot family of [four].” (Photo courtesy of Stephanie Lightfoot.)