Groundbreaking Exhibition Revolution of the Eye Opens at the Center for Art, Design and Visual Culture 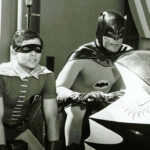 Hailed as “groundbreaking” by The Baltimore Sun’s David Zurawik, Revolution of the Eye: Modern Art and the Birth of American Television, the first exhibition to explore how avant-garde art influenced the look and content of network television in its formative years, is on view at the UMBC’s Center for Art, Design and Visual Culture (CADVC) through December 10.

From the late 1940s to the mid-1970s, the pioneers of American television adopted modernism as a source of inspiration. Revolution of the Eye looks at how the dynamic new medium of television, in its risk-taking and aesthetic experimentation, paralleled and embraced cutting-edge art and design.

Highlighting the visual revolution ushered in by American television and modernist art and design of the 1950s and 1960s, Revolution of the Eye features over 260 art objects, artifacts, and clips. Fine art and graphic design, including works by Saul Bass, Marcel Duchamp, Roy Lichtenstein, Man Ray, Georgia O’Keeffe, and Andy Warhol, as well as ephemera, television memorabilia, and clips from historic television programs and film, including Batman, The Ed Sullivan Show, The Ernie Kovacs Show, Rowan and Martin’s Laugh-In, and The Twilight Zone will be on view.

Early on, television opened its doors to appearances by avant-garde artists — from John Cage performing a musical composition on I’ve Got a Secret to Salvador Dali as the mystery guest on What’s My Line. Revolution of the Eye examines the diverse ways modern artists, designers, and critics used the medium as a significant vehicle for self-promotion to a broad national audience. Viewers will experience rare clips of Cage, Dali, Willem de Kooning, Marcel Duchamp, Ray Eames, Roy Lichtenstein, Ben Shahn, George Segal, and other renowned artists.

During the exhibition’s premiere in New York, The New York Times commented, “We may think of TV before All in the Family as a vast wasteland, but the more than 260 items in the exhibition — clips, advertisements, art pieces, publications, merchandise — reveal the influence and even the input of artists from Duchamp and Dali to Ben Shahn, Saul Bass, Roy Lichtenstein and Andy Warhol.”

Revolution of the Eye examines television’s promotion of avant-garde ideals and aesthetics exemplified by the integration of Dada, Surrealism, and other experimental genres into the aesthetically and conceptually rich series The Twilight Zone and The Ernie Kovacs Show by such pioneers as Rod Serling and Ernie Kovacs. Both embraced avant-garde ideas that broached broad social or cultural issues — from the politics of the Cold War to the corporate ambitions of the networks. Their work was artful and sophisticated, exemplifying the best of early television. Their influential programs reflected the medium’s potential to alter the way Americans understood the world.

The exhibition also features work by Stan VanDerBeek, a professor of art and film at UMBC from 1975 until his death in 1984, when he chaired the Department of Visual Arts. A pioneer in the development of experimental film and live-action animation techniques, VanDerBeek contributed early in his career to Winky Dink and You, an ingenious interactive Saturday morning show that aired on CBS from 1953 to 1957, clips of which are shown in the exhibition.

“Many critics speak of present-day television as kind of a new golden age in which the medium is seen to have surpassed film as a major venue for artistic experimentation and quality,” says exhibition curator and UMBC research professor Maurice Berger. “Revolution of the Eye reminds us that the desire for outstanding, artistically important programming was in television’s DNA from the beginning.”

The exhibition is organized by UMBC’s Center for Art, Design, and Visual Culture and the Jewish Museum, New York, where it was on display in 2015 prior to a national tour that included the NSU Art Museum Fort Lauderdale and the Addison Gallery of American Art.

The Center for Art, Design and Visual Culture is located on the first floor of the Fine Arts Building and is open Monday through Saturday from 10 a.m. to 5 p.m., on Thursdays until 7 p.m., and on Sundays from 12 to 5 p.m. Admission is free.

Lynn Spigel, Professor of Screen Cultures at the School of Communication at Northwestern University, who wrote the introduction to the exhibition catalog, will speak about the exhibition on Thursday, November 17, 4 p.m. in 132 Performing Arts and Humanities Building.

Revolution of the Eye is made possible by the generous support of the Andy Warhol Foundation for the Visual Arts, the Skirball Fund for American Jewish Life Exhibitions, the Stern Family Philanthropic Foundation, the National Endowment for the Arts, the National Endowment for the Humanities, and other generous donors. The exhibition’s presentation at UMBC is supported in part by the Maryland State Arts Council and the Baltimore County Commission on Arts and Sciences.