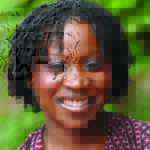 Once upon a time, Omolola Eniola-Adefeso ’99, chemical engineering, was on track to attend medical school. But she became a chemical engineer instead – so she could better attack problems such as her number one target: heart disease.
Eniola-Adefeso, an assistant professor of chemical engineering at the University of Michigan, investigates radical ways of delivering medicine that could prove efficient and effective than current practice. And she may succeed because she is thinks like an engineer – and not a doctor. Eniola-Adefeso came to Maryland from her native Nigeria the age of 16. She began her studies at Catonsville Community College, before transferring to UMBC, where she met the late Janice Lumpkin, an African-American chemical engineering professor. Lumpkin not only guided her student into a field where her passion for technology and medicine could intersect, but also helped her become a member of the first class of UMBC students in the Minority Access to Research Careers program.
After graduating from UMBC, she took a doctorate at the University of Pennsylvania in 2004. Her scholarship for graduate studies there was actually named after Lumpkin – who also attended Penn and died tragically after childbirth in 1997.
In 2006, Eniola-Adefeso (pronounced ah-DAY-feso and known to everyone as “Lola”) joined the faculty at Michigan where her lab seeks ways to create and use miniscule synthetic pellets to mimic white blood cells and deliver medicine more efficiently.
So far, she is succeeding with laboratory mice specially bred to have cardiovascular disease. She is moving next to larger animals before she attempts experiments on humans.
Why white blood cells? When there is an infection or injury in the body, nearby cells send out a chemical alarm. On receiving that signal, white blood cells – especially those known as neutrophils – leap to action.
Normally, neutrophils are spherical, but they can change their shape as they charge to the scene of injury, producing a sticky surface protein to match proteins at the target site. As the neutrophils pass injured tissue, their protein grabs onto proteins on the tissue and the neutrophils hoist themselves out of the blood stream, infiltrate the cell walls and go about the work of healing.
The system is incredibly efficient and it’s the reason most of us recover from our illnesses by doing nothing but letting the immune system do its thing.
But sometimes the forces of healing need help (such as antibiotics) which come in the form of pills or injections. And that’s where Eniola-Adefeso’s research comes in.
Current methods of drug delivery lack efficiency. A pill goes through the digestive system and is absorbed into the blood stream. Injections take a more direct route into the blood stream. But in both cases, only some of the drug winds up at the target site. Plus, extra medicine can occasionally cause serious and even fatal side effects.
Eniola-Adefeso’s proposed technique solves both issues. And because her father died of a heart attack five years ago, she’s focused her attention on cardiovascular disease. She’s trying to produce pellets that mimic white blood cells and go straight to heart muscle or blood vessels to repair them. Injected into your body, Eniola-Adefeso’s pellets – loaded with the right proteins and medicine – would find their way directly to damaged heart muscles or arteries and deliver medicine contained within it. Ideally the pellets would be designed to release the medicine for weeks or months, possibly even years.
The complexities include identifying target proteins in the cardiovascular system and factoring in significant variations in blood flow in the body. When the heart pumps blood, the arteries proximate to it surge like a river. But by the time the blood gets to your big toe or the skin of your elbow, it has slowed to a mild stream without the surge.
To actually deliver the medicine, Eniola-Adefeso’s pellets must also be biodegradable, so she is also working on testing polymers and plastics, seeking substances which degrade at just the right rate for what she wants to accomplish.
Then there is size. Eniola-Adefeso needs pellets about the same size as the neutrophils, which measure about 100 nanometers to about three micrometers and require a microscope to be seen. “Shape and size matter,” she says.
Eniola-Adefeso also believes the system would work for other diseases as well, including cancer. And her work is already receiving recognition. In April, she was the 2011 recipient of the Lloyd N. Ferguson Young Scientist from the National Organization for the Professional Advancement of Black Chemists and Chemical Engineers (NOBCChE), an award that recognizes and honors scientific contributions and achievements and dedication to research.
— Joel N. Shurkin