IMPORTANT: You are using an older version of Other that may not be supported in the future. Upgrade Now
Classic
UMBC News & Magazine
Institutional Group • 13 people
1

Carrying on a Philanthropic Legacy 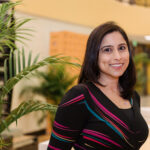 Behind every story of giving lies a story about someone’s generosity. For Hema Gowda ’01, biological sciences, this story was about continuing a generational legacy through philanthropy.

“My mom came to this country in the late ’60s, and education was a huge foundation for her in propelling her forward,” says Gowda, a Prince George’s County native who works in pharmaceutical research.

“When she retired, she set up endowments at [The University of Maryland,] College Park in the name of her parents because they were the ones that pushed her for higher education. She is the person she is today because of them…So I’d always been inspired by that and wanted to give back to UMBC because it was the foundation for my career.”

UMBC’s Alumni Endowment Scholarship Fund presents the perfect opportunity for alumni to give back to the university by directly contributing to the success of students in their undergraduate years. In Gowda’s case, the fund allowed her to follow in her mom’s charitable footsteps by establishing the Gowda Scholarship Endowment for UMBC in 2016 (and a similar scholarship at the University of Maryland School of Pharmacy in 2015) to help students interested in pursuing graduate studies in pharmacy find success at UMBC. 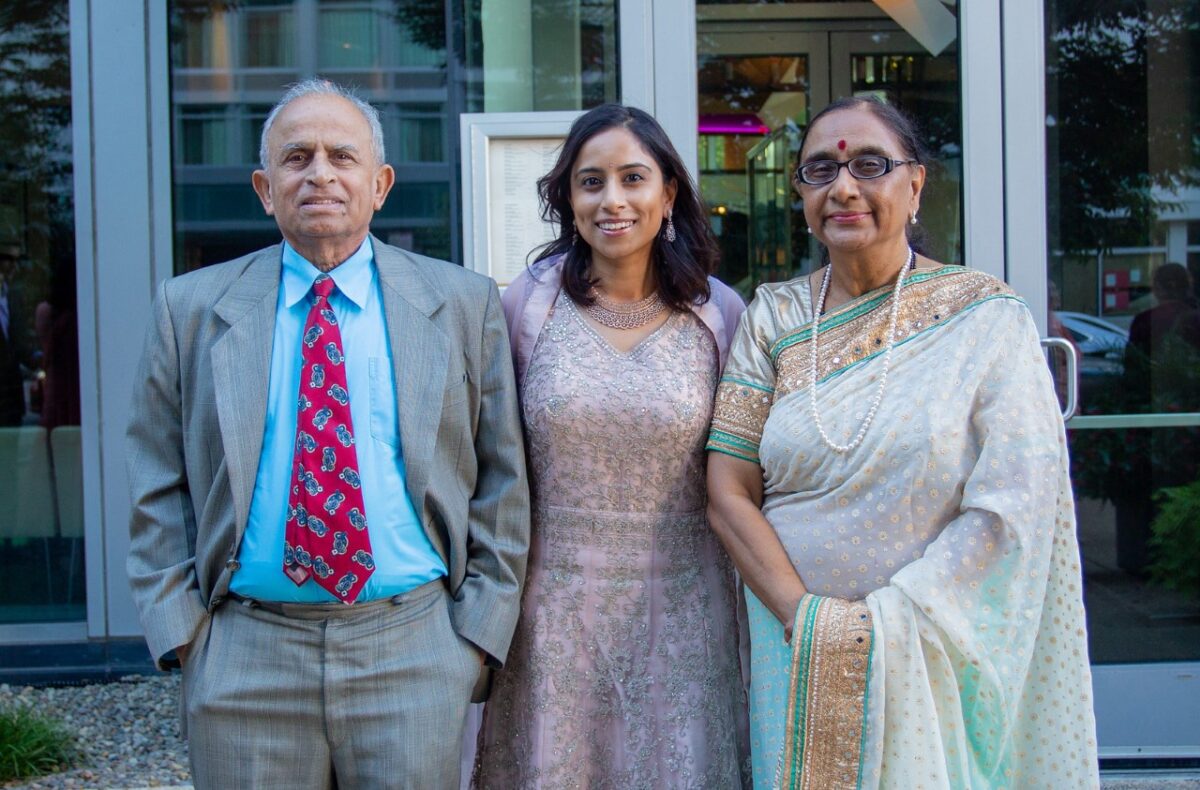 Even as an undergraduate, Gowda knew she wanted to give back to her alma mater, but it took her longer to decide what she really wanted to study at UMBC. When it came to deciding a major, she wanted to pursue the sciences after having been involved in a science and technology program at Eleanor Roosevelt High School. But even after deciding that certain routes like medical school were not for her, it took more steps to narrow down what path called out to her most.

Gowda applied to the University of Maryland School of Pharmacy in her senior year at UMBC and entered the next stage of her academic career. Prior to graduation in 2005, she caught sight of a posting for an editorial internship at the American Society of Health-System Pharmacists —an experience that would eventually lead her to a medical writing position at a medical communications agency in the Philadelphia area the following year. There, Gowda collaborated with pharmaceutical and biotechnology companies to help develop their clinical trial publications and scientific communications for products that were marketed or in development.

After about five years at the agency, Gowda joined the biopharmaceutical company, Incyte, and gained experience in the company’s medical affairs and clinical development groups. This latter opportunity allowed her to take advantage of the communication skills and clinical expertise she had gained through her previous positions and educational experience.

In April 2020, a month into the pandemic, Gowda started her new position as a global development scientist director at AstraZeneca.

“I collaborate with colleagues from many other functions to execute registrational clinical trials in lung cancer. We conduct the trials globally, and gather and submit data for regulatory agencies in hopes of getting new drugs approved for different types of cancers,” explains Gowda.

Gowda’s journey down multiple routes in pharmacy has shown that taking the time to figure out the right path was not at all a setback. Even if it took a bit longer for her to settle on the research route, Gowda did not regret any of the experiences she had gained along the way.

“Each segment of my career helped define my path a little bit better,” Gowda puts it. 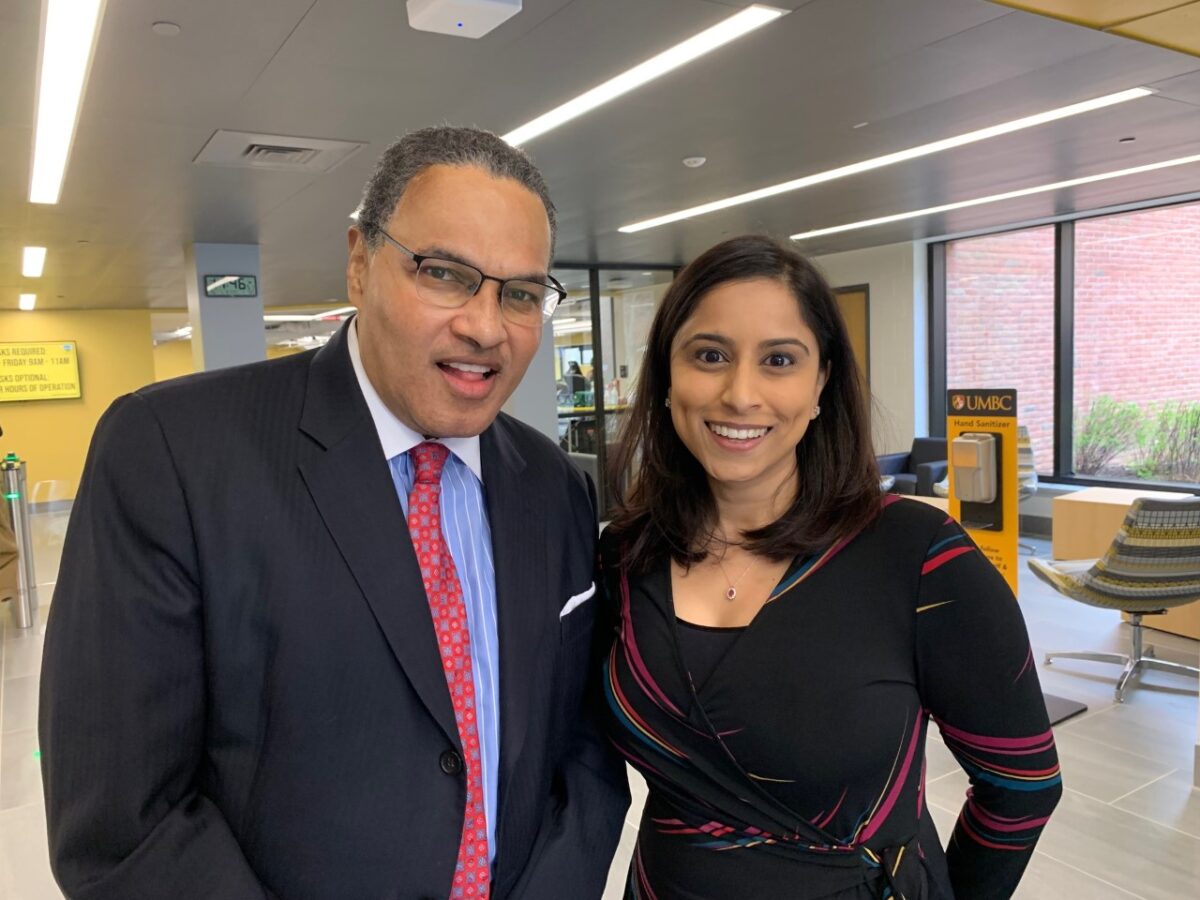 Reconnecting to her foundations

The Gowda Scholarship Endowment, open to students interested in pursuing a career in the pharmaceutical sciences, gives preference to students who graduated from a Prince George’s County high school or current residents of the county. On top of wanting to give back to the school system that helped build the foundation for her career, Gowda hopes the scholarship will benefit students who are juggling their responsibilities in the D.C. region.

In describing the time during the pandemic when she met virtually with her first scholar, Adam Kouyate ’22, biological sciences, Gowda says, “[My scholar] was brimming with excitement…and to me, it’s a small amount, but I know it’s a lot for them. And maybe 10 or 20 years from now, that might inspire them to do something similar.”

“Because of this scholarship, I was able to work less hours during the school year and focus more on classes and finding myself.”

The scholarship lifted a huge burden off Kouyate’s shoulders during a period of burnout. At the time she applied, Kouyate was working at a music store to help pay her tuition. Because she wanted to cover most of the tuition costs on her own, the scholarship allowed her to do so with only $200 coming from her parents. Kouyate was extremely grateful to have been chosen as a scholar, as it also meant she no longer needed to turn to student loans.

“Because of this scholarship, I was able to work less hours during the school year and focus more on classes and finding myself. Though I did end up switching from pharmacy to nursing, this scholarship gave me the peace of mind to focus on what I really wanted to do with my life,” says Kouyate.

Kouyate graduated from UMBC this past spring and will be attending the University of Maryland School of Nursing’s Master’s-Level Entry-Into-Nursing Clinical Nurse Leader program in the fall.

A second recipient of the scholarship, who graduated from Eleanor Roosevelt High School, is also currently studying at UMBC with plans to pursue a graduate degree in pharmacy.

Setting up lifetimes of success

Gowda’s connection to UMBC isn’t just limited to the endowed scholarship, but can be seen through her interactions with friends from her undergraduate days, connections to relatives interested in attending UMBC, and sponsored events such as the Endowed Scholarship Luncheon that is hosted annually at UMBC.

Now and moving forward, Gowda hopes to echo a legacy of giving that has been modeled by her mother as well as inspired by familiar faces at UMBC. Most importantly, she is eager to pass on a future of giving to her scholars—a future that may consist of trial and error, but also with valuable experiences along the way.

“It’s the gift that I want to keep giving, and I can only hope that this small amount for a semester or a year sets them up for a lifetime of success.”