From caravans to markets, the hajj pilgrimage has always included a commercial component 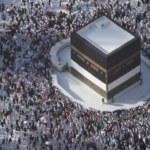 In early June 2022, Saudi Arabia announced a hajj “lottery” for Western pilgrims that made it mandatory for people from Europe, the Americas and Australia to apply for visas through a random draw through the Saudi government-backed website. This new website also offered customized and VIP packages while attempting to replace the services that tour agencies had offered for decades.

This year, an estimated 1 million people will perform the hajj, which is considered one of the five pillars in Islam. Under the lottery, only 50,000 permits were allowed from these 50 countries, compared with 25,000 for U.K. Muslims alone in previous years.

The resulting chaos left both pilgrims and travel agencies frustrated. Many Muslims who had already made their plans found they could not rebook under the new plan because of malfunctioning websites, among other issues. Several among those who were able to arrive in Saudi Arabia found that the hotel rooms they had paid for were no longer available or were double-booked.

The impact extends beyond individual pilgrims. Tour agencies will potentially lose out on thousands of dollars in revenue per prospective pilgrim. The cost of hajj packages has been rising for many years across the globe. For pilgrims leaving from the United States, trips can range between US$12,000 and $20,000. Cutting out travel agencies that function as middlemen might help reduce these costs. But under the new system, the money will be channeled to the Saudi government, which aims to decrease its dependence on oil revenue through an increase in tourism activities. This has reignited an ongoing debate on the commercialization of the hajj under Saudi Arabia’s influence.

While Saudi Arabia sought to cut out the Western tour agencies reaping profit from hajj, their own offerings outlined “silver,” “gold” and “platinum” packages, boasting of “luxurious services,” five-star stays in Mecca and Medina, and “superior camping spots equipped with excellent facilities and modern furniture.”

The current changes to the hajj system are just one example of centuries of economics mixing with tradition. Generally, pilgrims try to emulate the hajj rituals in the order of the Prophet Muhammad’s own last pilgrimage before his death. Those rituals emphasize the cleansing of the soul, detachment from worldly concerns and rejection of status distinctions among Muslims, symbolized by the donning of the white garments that all pilgrims wear. Pilgrims continue to wear these robes in the service of these goals, but they also travel to the various sites in luxurious high-speed trains and buses.

In the past, too, the commercial, technological and secular aspects of the hajj have been a topic of much debate about whether they change the spiritual nature of the pilgrimage. As a scholar of pilgrimage, ritual and Islam, I know that the focus on commerce and profits has been part of the long history of the hajj.

Early roots of trade and commerce

Across religious traditions, pilgrimages have always had a commercial component. From pilgrimage caravans and markets that grow around religious sites to the gifting of relics and souvenirs, religion and commerce have been deeply linked.

The hajj is no different. As F.E. Peters, an eminent scholar of Islamic studies, noted in his 1994 significant study on the hajj, the Quran itself acknowledges that Muslims were permitted to indulge in commerce around the pilgrimage: Verse 2:198 in the Quran says, “There is no blame on you for seeking the bounty of your Lord during this journey.” Quranic commentaries have explained this verse to mean that Islam allows commercial activity before and after the days of hajj rituals.

As Islam spread, so did the commerce. While the narrow set of ritual acts of hajj remained, the total pilgrimage experience was shaped by business. For centuries, major overland caravan routes traveled through Damascus, Cairo and Baghdad, with merchants attaching themselves to these caravans.

Traders targeted the pilgrims as consumers, and many pilgrims themselves engaged in trade to pay their way. As traveling overland for the hajj journey could take up to two years, pilgrims traded fruits, wines, silk, carpets and other items. They purchased goods such as coffee and pearls for their return journey.

A changing world, a changing hajj

The evolution of technology and means of travel inevitably brought new economic considerations into the organization of the hajj. The invention of the steamship was central to the development of mass pilgrimage to Mecca in the 19th century – the total number of pilgrims per year rose from an estimated 112,000 participants in 1831 to some 300,000 in 1910.

The use of a for-profit tourism company to regulate the hajj may have seemed a new development, but agents and intermediaries had been central to the process for centuries. The “mutawwifin,” the hereditary guilds of pilgrimage guides, provided pilgrims with guidance in carrying out the rituals of the hajj and were central to Mecca’s government and its economy.

Over the centuries, these local guides would develop contacts in foreign lands, encouraging Muslims to perform the pilgrimage. In addition to linguistic and ritual guidance, the mutawwifin would also arrange meals, lodgings and tents – acting in ways that were similar to modern-day tour operators.

The steamship was just one technological innovation that altered the hajj landscape into a more commercial venture. At the turn of the 20th century, Sultan Abdul Hamid II of the Ottoman Empire was an adamant promoter of the construction of the Hejaz Railway, meant to establish a connection between Istanbul, the capital of the Ottoman Empire, and the holy cities of Mecca and Medina.

Proponents of the railway argued that it would both significantly improve conditions for pilgrims on the overland routes and help the establishment of commerce and trade.

The establishment of the Kingdom of Saudi Arabia in 1932 and the eventual replacement of shipping and rail with air transport transformed the nature of the hajj further. The new Saudi state adhered to the doctrine of Wahhabism, an Islamic reform movement originating in the 1700s that rejected all forms of innovations outside of the Quran and the traditions of the Prophet Muhammad in his time.

Yet despite this condemnation of innovation, the Saudi government has overseen decades of commercial development of the hajj, encouraging the tourism atmosphere and deriving significant profits from the obligatory pilgrimage. 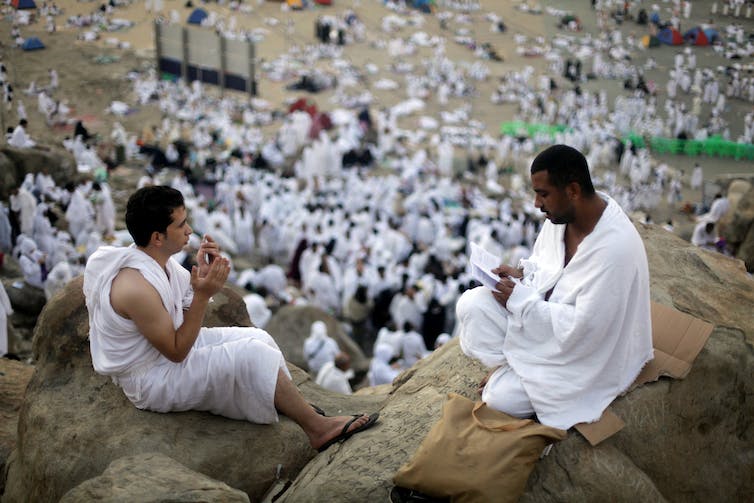 Muslim pilgrims pray on a rocky hill called the Mountain of Mercy near the holy city of Mecca, Saudi Arabia, in 2013. AP Photo/Amr Nabil

While the hajj has historically been linked to commerce, pilgrims of late have expressed dissatisfaction with the overt emphasis on the touristic experience and the sense that it is now diminishing the spiritual nature of the pilgrimage.

Indeed, commercial revenues from the hajj remain a contested and even a political topic. In 2018, Yusuf al Qaradawi, a prominent Muslim Brotherhood cleric based in Qatar, issued a fatwa calling for limiting spending on pilgrimage. “Seeing Muslims feeding the hungry, treating the sick and sheltering the homeless are better viewed by Allah than spending money on the hajj and umrah every year,” he declared. This statement was viewed as an attempt to undermine Saudi Arabia by discouraging Muslims from performing the pilgrimage, as the revenues go to the government.

Al Qaradawi’s fatwa drew ire from certain circles, as all Muslims who are financially and physically capable must attempt to complete the hajj, regardless of any geopolitical sentiment toward Saudi Arabia. Yet there is no doubt that the current hajj has refocused attention on whether the business of hajj remains in line with the original allowance to “seek bounty” during the pilgrimage to Islam’s holiest sites.

This article is republished from The Conversations under a Creative Commons license. Read the original article.