Lost in the Art: English major guards and curates paintings at Baltimore Museum of Art 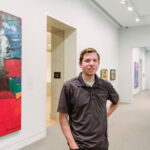 A massive painting dwarfed Rob Kempton ’12, English, as he stood in a Baltimore Museum of Art gallery.

In his security guard uniform, Kempton gestured to the swoop of orange oil paint on the blood-red background, painted by Grace Hartigan in 1957 and titled “Interior – The Creeks.”

“I love the opaque strong colors. There’s such a push and pull, rhythm and movement, it really dances,” he said. “And here,” he said, pointing to a section that Hartigan slathered with paint, then scraped away with a palette knife. “See where she scrapes it away, it’s like revising a poem, so direct. The edits and revisions are adding to the emotion.”

Kempton was one of seventeen security guards at the museum who curated a show that ran from March 27 to July 10, “Guarding the Art,” a pioneering show in which the people who spend the most time with the art had a say in what got hung on the walls.

The collaborative show, which was the idea of museum trustee Amy Elias, reminded Kempton of UMBC’s poetry classes and workshops, where, he said, “I always felt like I had a voice. Like in this exhibition, everyone has a personal take on art.”

Much like the poetry classes at UMBC, Kempton said, the show’s curation was full of discussions and critiques: “It’s a dialogue with peers. You get ideas, you see something for the first time that you didn’t.” 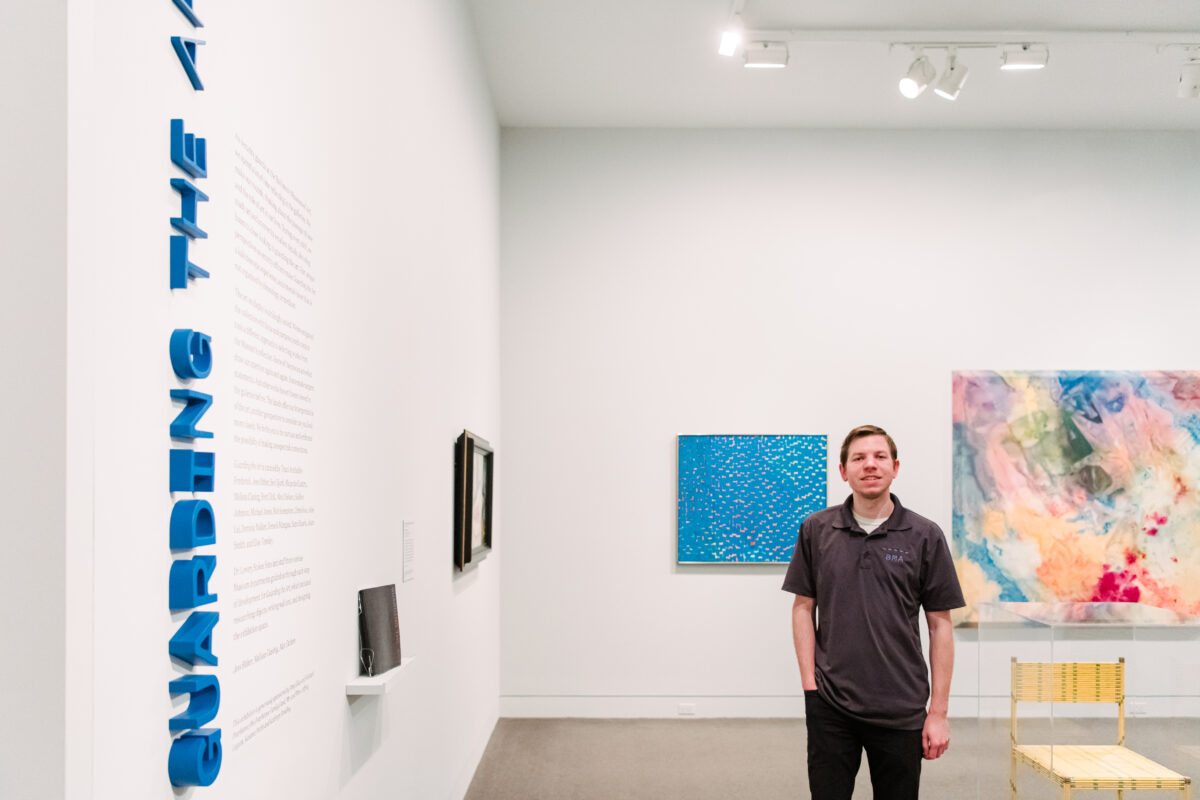 Michael Fallon, senior lecturer emeritus in the English Department, visits the museum often since it’s so close to his home. Over the years, he became reacquainted with Kempton in the sculpture garden and galleries. Fallon remembered Kempton from the poetry workshop as “a really bright guy. This wasn’t a lark for him, he had read a lot of poets and had been writing on his own before the class.”

The poetry workshops, Fallon said, hold “an element of collaboration. … They’re working together, helping other people get better as you get better yourself. There’s an element of excitement, a good fellowship, which is a rare, great thing.”

The “Guarding the Art” show, Fallon said after he’d walked through those galleries, carried that element as well. Fallon said he was “not at all surprised” that Kempton got involved.

“He has turned that situation into a real career.”

Kempton, who still writes poetry, started at the BMA six years ago, seeking an inspiring workplace. He was so enamored with the galleries that he returned to school, earning a master’s in museum studies from Johns Hopkins University in 2020.

“Visual art and poetry live in the same space. My experience in poetry gives me a way to view the art,” Kempton said.

For the show, he first chose one of his favorites, an abstract by Alma Thomas called “Evening Glow” from the museum’s contemporary wing. “I returned to it, when the galleries weren’t busy, again and again,” Kempton said. “It reminds me of dusk, the deep blue, the tessellated patterns like mosaics. I imagine it’s the light through the trees from her kitchen window. You’re in the gallery all day, this is a good reminder that the natural world still exists.”

His second piece, the enormous Hartigan painting, however, was in the museum’s storage rooms. He spotted the work by digitally browsing the BMA’s collection files.

“It was amazing, there is a defiance to it, she was really going for it,” Kempton said. 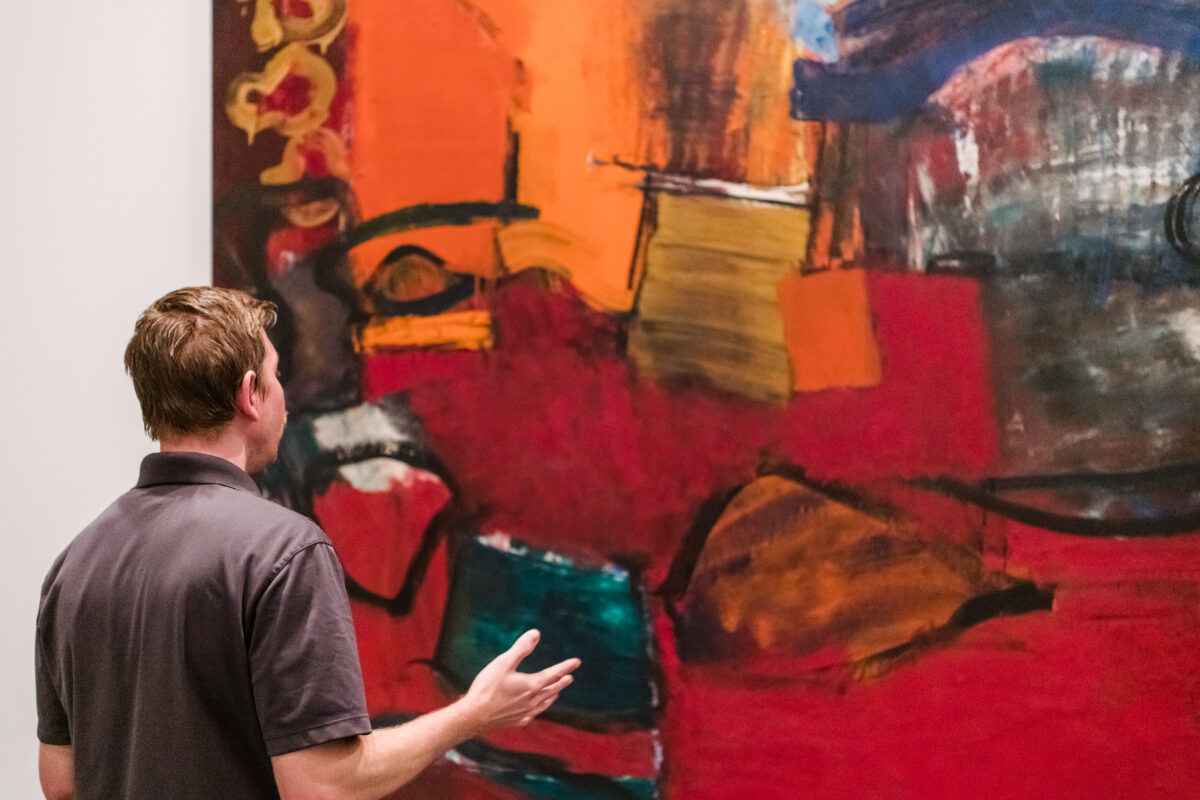 When he walked into the “Guarding the Art” galleries recently, he said, “It feels validating. Guards rarely get the opportunity to talk about art, and never in a way that you can interpret for an audience.”

The exhibit granted “agency and authorship to people usually devoid of that power,” he wrote for an Alumni Spotlight for UMBC’s English Department.

The guards went through a year-long professional mentorship while they were curating the show, with museum staff and with Lowery Stokes Sims, an independent curator and art historian. The guards wrote label copy with personal takes on each piece, which rarely happens in museum shows.

“When I first encountered this painting,” reads Kempton’s label for “Evening Glow,” “I experienced a deep calmness, a charge of introspection.”

Kempton wrote a forthcoming piece for BMA Today, the museum’s magazine, about curating the show. He hopes to work as a writer for museums.

Late at night or early in the morning, Kempton strolls through the empty galleries.

“It’s intimate, you’re going toe-to-toe with the art,” Kempton said. “It’s a reverent kind of feeling. Anything you want to do or think is possible in that moment. You can get lost in a piece, and that’s the best.”