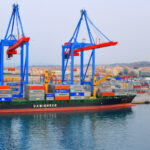 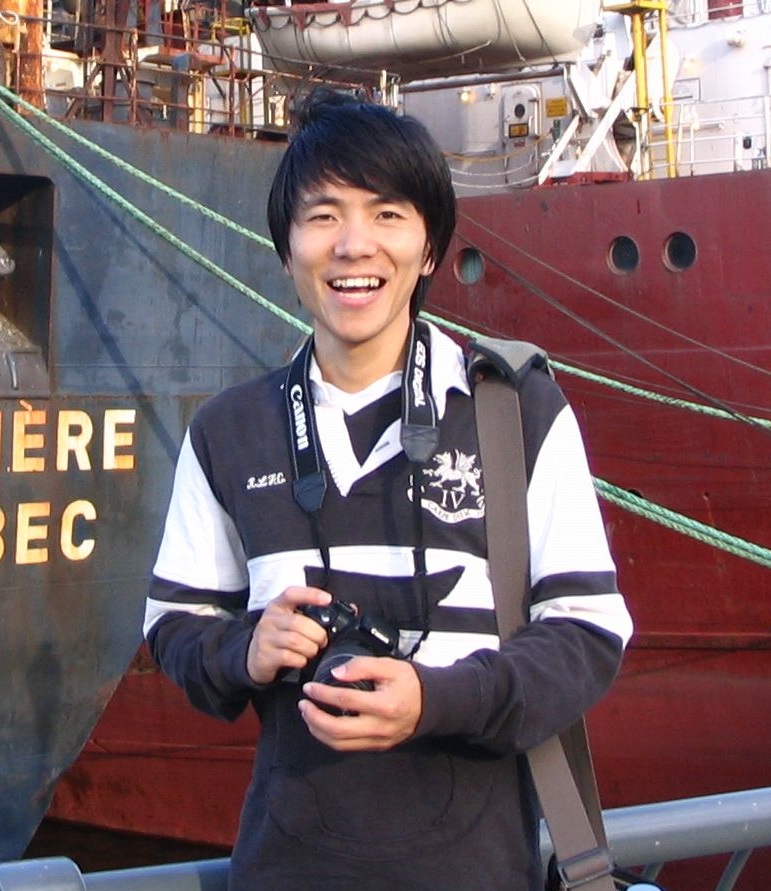 A new study in Science Advances led by UMBC’s Tianle Yuan used satellite data from 2003 – 2020 to determine the effect of fuel regulations on pollution from cargo ships. The research team’s data revealed significant changes in sulfur pollution after regulations went into effect in 2015 and 2020. Their extensive data set can also contribute to answering a bigger question: How do pollutants and other particles interact with clouds to affect global temperatures overall?

Tiny particles in the atmosphere, which are called aerosols and include pollution, can harm human health, but they also often have a cooling effect on the planet because of the way they interact with clouds. However, estimates of the extent of that effect range by a factor of 10—not very precise for something so important.

“How much cooling the aerosols cause is a big unknown right now, and that’s where ship tracks come in,” says Yuan, an associate research scientist at the Goddard Earth Sciences Technology and Research (GESTAR) II Center.

When pollutant particles from ships enter clouds low in the atmosphere, they decrease the size of individual cloud droplets without changing the total volume of the cloud. That creates more droplet surface area, which reflects more energy entering Earth’s atmosphere back to space and cools the planet.

Instruments on satellites can detect these differences in droplet size. And the air over the ocean is generally very clean, making the relatively narrow ship tracks that snake across the ocean easy to pick out. “Most of the original cloud is unpolluted, and then some of it is polluted by the ship, so that creates a contrast,” Yuan explains.

While ship tracks can be relatively obvious in satellite data, you have to know where to look and have the time and resources to search. Before advances in computing power and machine learning, Yuan says, Ph.D. students could focus their entire thesis on identifying a group of ship tracks in satellite data.

“What we did is automate this process,” Yuan says. His group “developed an algorithm to automatically find these ship tracks from the sea of data.”

This huge advance allowed them to generate a comprehensive, global map of ship tracks over an extended period (18 years) for the first time. Next, they will share it with the world—opening the door for anyone to dig into the data and make further discoveries.

A figure from the new study shows an image collected by NASA’s MODIS satellite of the U.S. West Coast (left) overlaid with ship tracks detected by the research team’s algorithm (right).

Even before pollution-limiting regulations were put into place, Yuan and his colleagues found that ship tracks didn’t occur everywhere ships were traveling. Only areas with certain types of low cloud cover had ship tracks, which is useful for adjusting the role of clouds in climate models. They also found that after Europe, the U.S., and Canada instated Emission Control Areas (ECAs) along their coastlines in 2015, ship tracks nearly disappeared in those regions, demonstrating the efficacy of such regulations for reducing cargo ship pollution in port cities.

However, shipping companies didn’t necessarily reduce their pollution output across the board. Instead, they made changes to adapt to the new rules. Ports in northern Mexico (not part of the ECA system) saw increased activity, and pollution “hot spots” built up along the boundaries of the ECAs as ships altered their routes to spend as few miles as possible inside the restrictive zones.

In 2020, though, an international agreement set a much more restrictive standard for shipping fuel across the entirety of global oceans, rather than only near coastlines. After that, the only ship tracks the team’s algorithm could detect were those in the cleanest clouds. In clouds with even mild background pollution, the presumed ship tracks blended right in. Another figure from the paper shows how regulations affected ship tracks. In the middle panel, blue areas show how ships were carefully avoiding the Emission Control Areas near the coasts. The red and orange areas show increased traffic just outside the ECA boundaries and at ports not affected by the regulations. In 2020 (bottom panel), blue areas indicate that ship tracks largely disappeared even in areas with high ship traffic.

It seems obvious that reducing pollution from ships would produce a net benefit. However, because particles (such as shipping pollution) have a cooling effect when interacting with clouds, reducing them significantly could contribute to a problematic uptick in global temperatures, Yuan says.

That’s another reason it’s important to firm up the degree to which particulate pollution cools the planet. If the cooling effect of these pollutants and other particles is significant, humans will need to balance the need to prevent extensive warming with the need to reduce pollution where people and other species live—which creates difficult choices.

“Ship pollution alone can create a substantial cooling effect,” Yuan says, “because the atmosphere over the ocean is so clean.” There is a physical limit to how small cloud droplets can get, so at a certain point, adding more pollution doesn’t increase the clouds’ cooling effect. But over the ocean, because the background is largely unpolluted, even a small amount of pollution from ships has an effect.

Ocean pollution is also an outsize driver of the cooling effect of aerosols, because low clouds, which are most conducive to creating ship tracks, are more common over water than on land. And, as Yuan reminds us, “the ocean covers two-thirds of the Earth’s surface.” 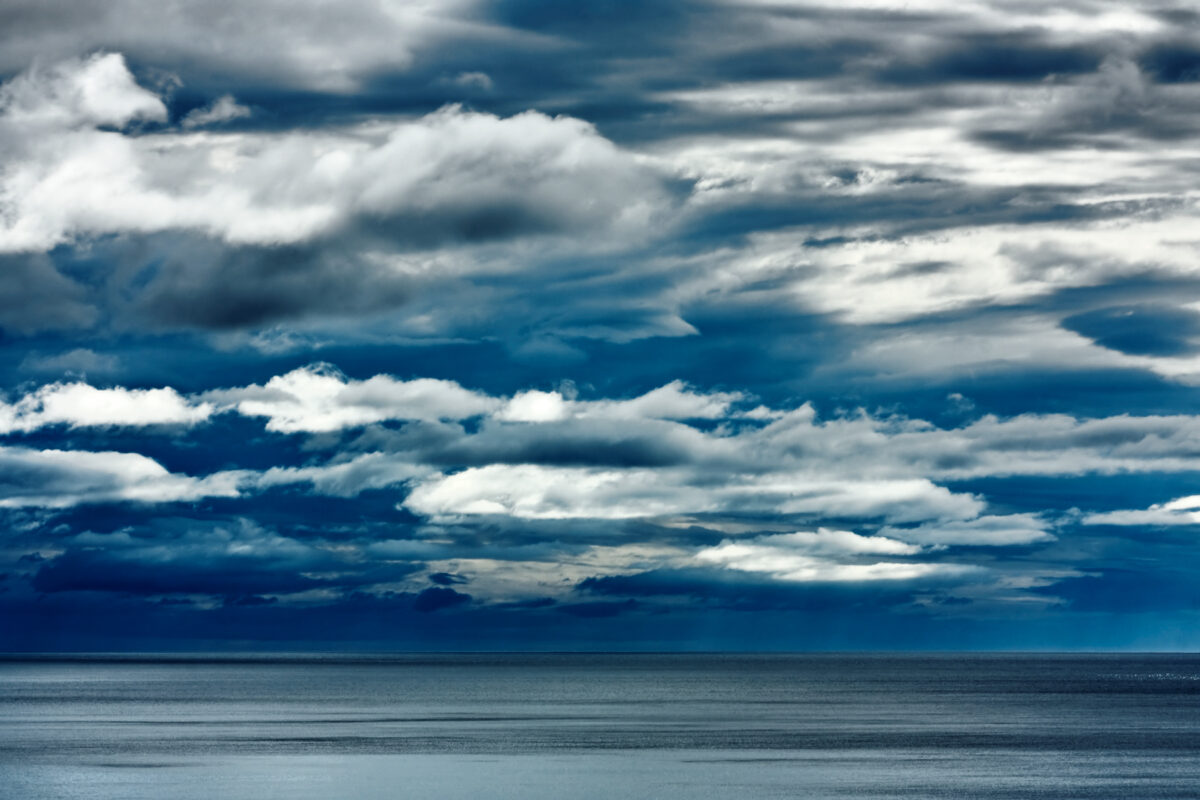 Low clouds over the ocean. (Nicolas Raymond/CC BY 2.0)

Moving forward, Yuan and his colleagues are helping address this conundrum by continuing their work to define more precisely the role clouds play in climate. “We can take advantage of the millions of ship track samples we have now to start to get hold of the overall aerosol-cloud interaction problem,” Yuan says, “because ship tracks can be used as mini-labs.”

By analyzing data from a relatively simple and well-controlled system—narrow ship tracks running through very clean clouds—they can come to conclusions they can be confident about.

Other research teams can also use the team’s data set and algorithm to come to their own conclusions, amplifying the potential public impact of this work. That spirit of collaboration will help scientists and communities determine how best to approach global challenges like pollution and temperature change.