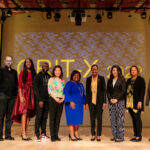 Amid a bustling day filled with Homecoming excitement, GRIT-X returned to UMBC this month for its sixth year, delivering a wide-ranging lineup of Retriever excellence in action. Held in the Fine Arts Recital Hall, this year’s GRIT-X was the first for new UMBC President Valerie Sheares Ashby. Enjoying one engaging talk after another, she deemed the event “the essence of UMBC.”

“What a beautiful day,” said President Sheares Ashby, in her remarks to the GRIT-X audience. “Not only were [the presenters] brilliant, they were people-centric. They were thinking about things that were real and important to each one of our lives being better, the universe being better, our bodies being better, and our communities being better. I cannot have experienced a better first GRIT-X.”

Delali Dzirasa ‘04, computer engineering, opened this year’s GRIT-X event with a presentation detailing how his company, Fearless, led the development of the Searchable Museum to complement the Smithsonian National Museum of African American History and Culture (NMAAHC) “Slavery and Freedom” exhibition. Dzirasa elaborated on how his team, including several UMBC alumni, was able to reimagine this exhibit specifically for online audiences amid the pandemic. The Fearless CEO was the third in his family to deliver a GRIT-X talk, following his wife, Baltimore City Health Commissioner Letitia Dzirasa ‘03, biological sciences (GRIT-X 2021), and his brother Kafui Dzirasa ‘01, M8, chemical engineering (GRIT-X 2017).

Can we reduce the deluge in sea levels with a data deluge?

Vandana Janeja, professor and chair of information systems, discussed the research she’s leading as the director of the NSF HDR Institute for Harnessing Data and Model Revolution in the Polar Regions, or iHARP. Janeja outlined how she and the iHARP team are utilizing data science, machine learning, artificial intelligence, and polar science to analyze enormous volumes of climate data as well as Arctic and Antarctic observations in ways that could help populations respond to the harmful impacts of climate change.

Sounds of the world through the violin

Airi Yoshioka, professor of music, delivered her presentation on how the cultural background of a composer manifests in the music they create. Yoshioka played excerpts of music from several composers around the world, explaining how they were able to express their cultural identities through their music. The violinist then captured the imagination of the audience with her striking performance of “Sentimental” from “Five Little Milonguitas” by composer Pablo Ortiz from her 2015 album Sueños Misticos.

Community building: How to build with materials that are stronger than brick and mortar

Alicia Lynn Wilson ‘04, political science, serves as vice president for economic development at Johns Hopkins University. She has taken part in some of the largest redevelopment efforts in the country, overseeing more than $10 billion in redevelopment projects in the last decade. Wilson shared her perspective on how every person is involved in construction, being actively engaged in the community-building enterprise. Her presentation outlined five principles that she relies on when forging and maintaining community connections.

Glucosome: 4D Visualization of the secret society of metabolic enzymes

Minjoung Kyoung, associate professor of chemistry and biochemistry, started her presentation on metabolic enzymes in an unexpected way: by showing the audience a picture of donuts. The image helped to entice the audience as they listened to her research on how the food we eat transforms into glucose and the metabolic process that happens as a result. The presentation explored the glucose metabolism and its 4-dimensional network with mitochondria in living cells, and how Kyoung’s team built the Lattice Light Sheet Microscope to better visualize small features inside of living cells.

Matthew Fagan, associate professor of geography and environmental systems, delved into his research related to forest restoration and reforestation showing that sometimes, planting trees can cause more harm than good. He educated the audience on the rise of tree planting initiatives around the world and the reality of what has happened as a result of reforestation efforts.

The many faces of immune cells: Building back tissues after trauma

Kaitlyn Sadtler, ‘11, biological sciences, who earned an honorary doctorate from UMBC in 2022, presented on immunology and how the body works to heal after injuries. Sadtler is an investigator and chief of the section on immunoengineering at the NIH’s National Institute for Biomedical Imaging and Bioengineering. She earned a Ph.D. at Johns Hopkins University School of Medicine and completed a postdoctoral fellowship at MIT. She described her lab’s research into different immune cells and how they respond during injuries. She also shared how her team is working to develop new methods to help modulate the immune response to injury and implantation of medical devices.

The quantum universe is weird, but our world is not: Schrödinger’s cat is dead, right?

Sebastian Deffner, associate professor of physics, focused his presentation on demystifying the world of quantum physics and the quantum universe. He offered the audience an introduction to the components of this growing field of study. He also explained different interpretations of quantum mechanics with his analysis of the “Schrödinger’s cat” thought experiment.

Nkiru Nnawulezi, associate professor of psychology, has been working with the D.C. Coalition Against Domestic Violence to collect data on the experiences of domestic violence survivors in Washington D.C., particularly related to housing services. She closed the afternoon’s program by detailing her experience of conducting research interviews with the survivors. She explored what can be done to create more inclusive community responses that support domestic violence survivors in more effective and sustainable ways.