IMPORTANT: You are using an older version of Other that may not be supported in the future. Upgrade Now
Classic
UMBC News & Magazine
Institutional Group • 20 people
2 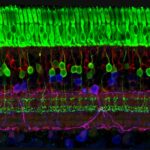 Most people rely heavily on image-forming vision to navigate the world, but our eyes do much more than help us “see” in the traditional sense. In addition to rod and cone cells that help us perceive contrast and color there are a small number of other specialized cells in our eyes. These cells, called intrinsically photosensitive retinal ganglion cells, play a role in what’s called non-image-forming vision. This type of vision affects everything from our mood, to our sleeping and eating patterns, to our ability to adapt to time zone and seasonal changes.

Phyllis Robinson, professor of biological sciences, has been studying melanopsin since its discovery. For the next four years, she’ll expand on her prior work with a new $2.5 million grant from the National Eye Institute (NEI), which is part of the National Institutes of Health. Colleagues on the grant include researchers at the NIH, Johns Hopkins University, Washington State University, and the Oregon Health Science University. The grant is a renewal of a previous five-year R01 award, traditionally the most sought-after and largest grant type from the NIH.

The new work will focus on how certain modifications to melanopsin affect its function. Robinson and colleagues will also examine the role of dopamine—a neurotransmitter involved in a huge range of mental and physical processes—in regulating this critical protein and its effects.

“We’re looking at this cool molecule that affects our light-dependent behaviors in ways we’re not conscious of,” Robinson says. “It’s really exciting stuff within our field.”

A cascade of changes 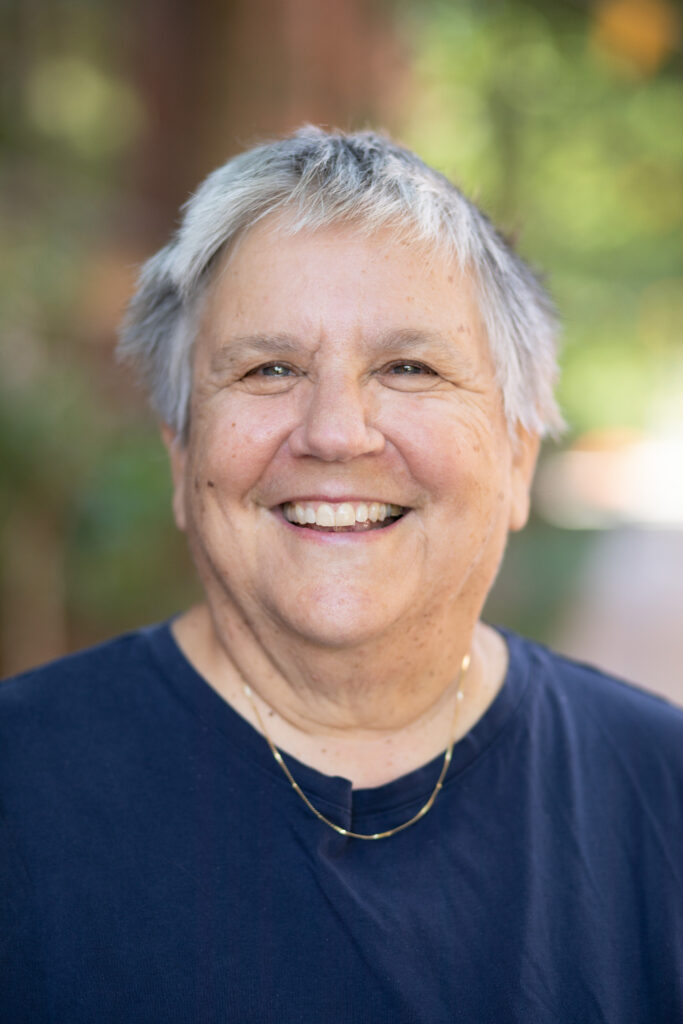 Robinson’s previous work has contributed significantly to a better understanding of melanopsin’s functions and mechanism of action. For example, shortly after melanopsin’s discovery, Robinson and her team demonstrated that it is involved in how our pupils respond to light.

In a typical eye, light exposure causes the pupil to contract, and then, when the light dims, the pupil dilates again in about a minute. This system protects the eye from damage caused by overexposure to light. This process is familiar to anyone who has had their eyes dilated by an eye doctor and then stepped out into a sunny day.

In contrast to that typical reaction, in mice with chemical modifications to the structure of melanopsin, the pupils stay dilated for about 45 minutes after light exposure, indicating that functional melanopsin is involved in the pupil’s response to light. Ongoing and future studies under the new grant will look at how a different set of modifications to melanopsin affect mice’s ability to adapt to changes in their light exposure patterns, as if they were changing time zones—a process called “photoentrainment.”

Robinson’s group also recently showed that dopamine can regulate the function of melanopsin in a cell culture. The new funding will allow the team to further explore dopamine’s role in non-image-forming vision in mice. In addition to showing whether or not dopamine regulates melanopsin, they will work to figure out what sequence of chemical reactions drives the protein’s effects, and what other molecules are involved, called a “chemical cascade.”

Melanopsin and the cells that contain it are also interesting from an evolutionary perspective, Robinson explains. “These ganglion cells may be the ancient photoreceptors,” she says.

“If you think about the evolution of vision, an organism just detecting whether it’s light or dark would be the first step,” she notes. “All you need is a light-sensitive cell.” In fact, even nocturnal animals and animals that live in dark environments, like caves or tunnels, have the cells responsible for non-image-forming vision, Robinson says.

In humans, a better understanding of melanopsin and its regulation could offer insight into health conditions that afflict shift workers, since their schedules do not align with their bodies’ natural hormonal responses to light. It could even reveal new potential targets for treating conditions like seasonal affective disorder or jet lag. And it might add evidence to arguments for dimming lights in the evening and prioritizing exposure to sunlight in the morning. 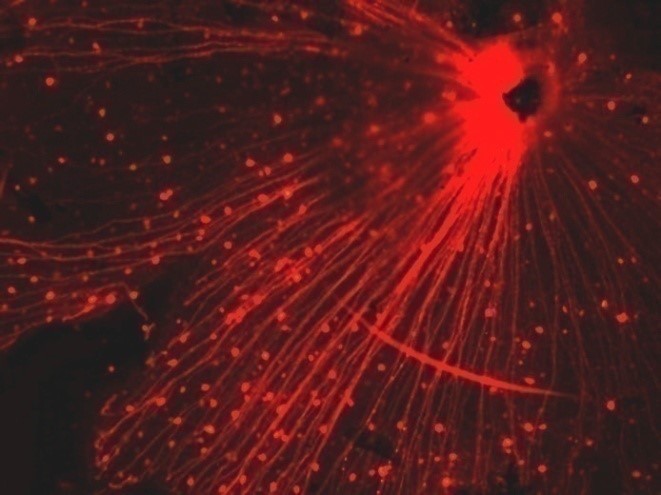 A microscope slide of the mouse retina, with the cells containing melanopsin stained red. (Image courtesy of Phyllis Robinson)

“Our research is going from molecules to behavior,” Robinson says. Her lab at UMBC focuses on physiology by doing studies with cells. Then, based on the findings, her NEI colleagues and graduate students, who are jointly advised by Robinson and NEI faculty, carry out behavioral studies with mice as a next step. Eventually, it could lead to work directly supporting human health.

“It’s always exciting to renew an R01 award and this new funding will make important new research possible,” Robinson says. “Melanopsin is a relatively unknown molecule that has huge impacts on our physiology and health,” she adds. “It’s like the mystery molecule in your eye.”

Over the next four years, Robinson and colleagues hope to make this molecule a little less mysterious.