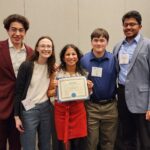 This was a long-sought victory for the team, which won second place in both 2020 and 2021, narrowly missing the title. This ascent is particularly remarkable considering that UMBC only began competing in 2019. 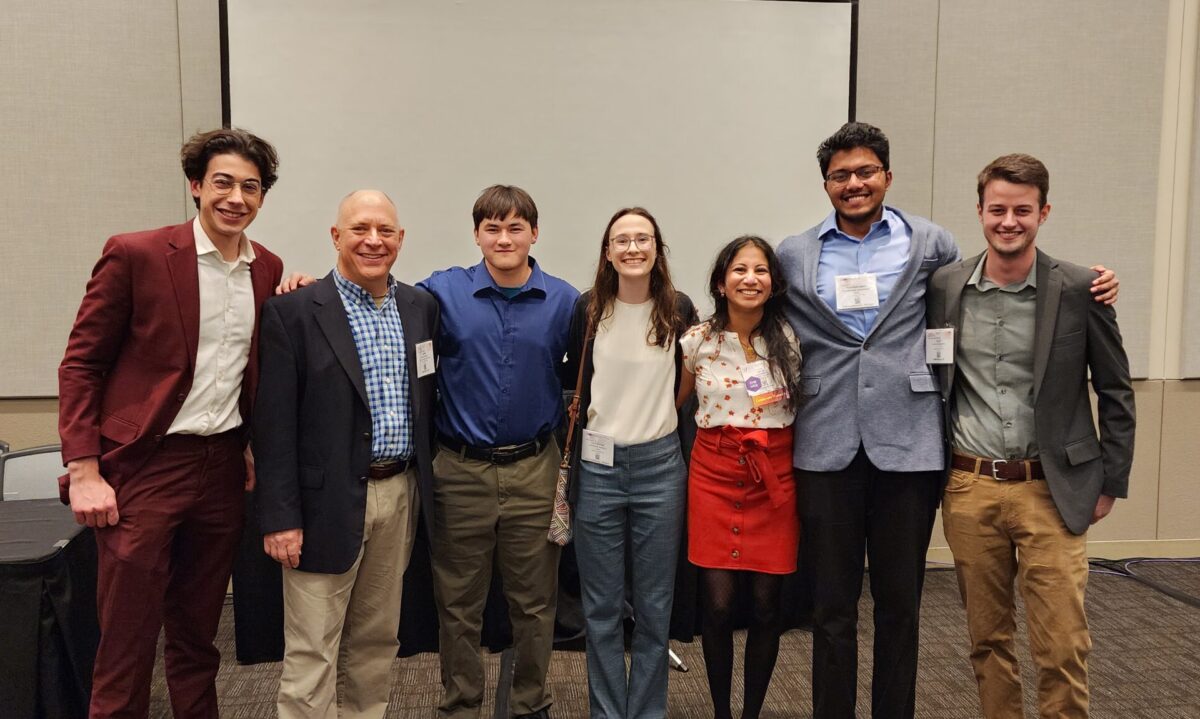 “This was my first time attending the national competition,” says Wraback. “Walking into the room and seeing three tables set-up (one for each team) with all the buzzers and scratch paper and pencil, was an unparalleled feeling.” Wraback explains that each competition board consists of six categories, drawing from core engineering courses (such as thermodynamics and heat and mass transfer), general science and math (such as organic chemistry and linear algebra), and general knowledge.

“You can feel the energy in the room with the other teams and it is contagious,” she says. In particular, she appreciated the support her team had in the packed competition room, from UMBC faculty to students she had met at the conference who came with their classmates to cheer for the team.

And UMBC students who couldn’t join them in Phoenix were supporting them through well wishes in their Discord server. “It made us feel supported and empowered,” says Wraback.

Road to the finals

“The students practiced extensively in preparation for the finals,” says team advisor Neha Raikar, lecturer in CBEE. This included not just studying technical content, but also building trust, bonding as a team, and prioritizing communication with each other.

“The team is well-balanced,” Raikar notes. “Members range from second-year students to seniors, representing all three CBEE tracks: traditional, biotechnology and bioengineering, and environmental engineering and sustainability. They play to each other’s strengths.”

Wraback agrees, sharing, “The most challenging part of being on the team has been understanding that it is okay not to know everything. I never want to let any of my team members down, but I also know that we all have our unique strengths, which overall makes us an incredibly strong team.”

That team’s sense of connection came through in the final round of competition. “As the answers were revealed, we found out we were the only team to get the question right so it really came down to the wagers we put,” Wraback recalls.

“I remember grabbing the hands of my teammates as we waited for the wagers to be revealed,” she says. “In an instant we saw the final scores and that we won by 200 points—such a close game. We all cheered and screamed and were just in absolute shock. It was so exciting, especially since we have been working so hard for this for so long.”

Making a name for themselves

On the path to victory, UMBC at one point bested Virginia Tech with a score of 7,100 to 63. “We compete against top schools at both regional and national levels, which shows the strength of UMBC’s chemical engineering program and our students’ fighting spirit,” says Raikar. “Even though we are a relatively small department, we pose a challenge to bigger schools.”

That’s in large part thanks to UMBC’s supportive community, says Wraback, who, after graduation, will help develop next-generation flight technology and aerospace systems at GE Aerospace, while also pursuing a master’s degree in materials science and engineering. She notes, “I truly believe that behind every successful person and team there is a community that is lifting them up and supporting them.”

In just a few years of national competition, the team has already made a name for itself. The competition’s organizing committee projected UMBC to be a finalist, and other universities are now reaching out to collaborate.