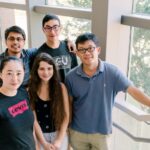 Natural dust particles and human-produced pollutants in the atmosphere affect Earth’s overall energy budget in different and nuanced ways. A new three-year, $620,000 NSF grant led by Zhibo Zhang, professor of physics, will study how dust, pollutants, and water vapor in the atmosphere interact, to increase understanding of their overall effects on the global climate.

Atmospheric dust particles are large enough that they can reflect the Sun’s energy back to space, producing a cooling effect—but they can also trap energy from the earth trying to escape, contributing to warming. Most pollutants are too small to contribute to cooling, and tend to warm the planet instead, Zhang explains. But when the two mix in the atmosphere, which is commonplace, things get complicated. The new project will work to disentangle the effects of different kinds of particles through a combination of techniques.

Zhang is particularly excited about the upcoming work, because research led by his former students made it possible. Qianqian Song, Ph.D. ’21, atmospheric physics, “wrote three papers over the last three years that gave us the credentials to apply for this program,” Zhang says. Olivia Norman’20, physics, also contributed substantially. Song is currently pursuing a postdoc at Princeton, and Norman is in graduate school at M.I.T.

Moving forward, Tony La Luna, a new Ph.D. student in Zhang’s lab, will focus on the project, and Zhang is looking forward to adding more students to his team.

Domino effect in the atmosphere

Wind is always lifting dust from Earth’s surface, especially in arid areas such as the Sahara and Gobi Deserts. Once airborne, the dust can travel long distances and interact with other particles in the atmosphere.

“When dust moves from its source region to a polluted area, it gets mixed with the pollution there. And we are interested in these interactions,” Zhang says. His team’s research has shown these interactions are most common in eastern China, India, and central Africa. 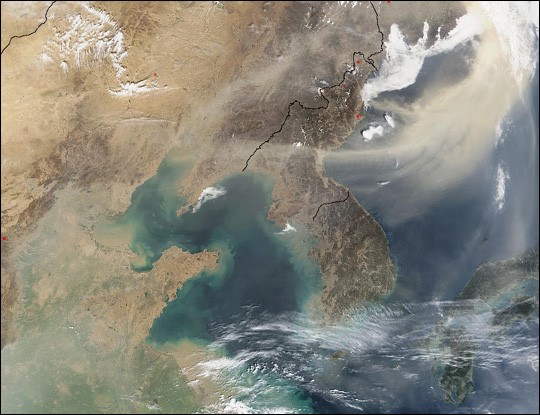 A satellite image centered on the Korean peninsula shows dust and clouds in the atmosphere. (Jacques Descloitres/NASA GSFC)

Until very recently, researchers typically modeled dust and pollutants separately, assuming they did not interact. But based on Zhang’s group’s research, that approach doesn’t produce a good approximation of what’s actually happening, he says.

Dust generally repels water, but pollutants are often attracted to water molecules. So dust coated with pollutants, called “coated dust,” can start to collect water. By changing how the dust reflects light, “This coating can change the net effect from cooling to warming,” Zhang says. By providing a surface to which water molecules can attach, the coated dust can also contribute to cloud formation, which affects precipitation.

It can actually be difficult to tell whether a satellite image shows dust, pollution, or coated dust—so developing techniques to distinguish between different kinds of atmospheric particles is another one of the team’s goals.

“First, we need a good dust model,” Zhang says. His collaborator Dr. Diana Ortiz-Montalvo at the National Institute of Standards and Technology (NIST) uses a special imaging technique to precisely measure the shape of dust particles in the lab. Those measurements will help create models of different kinds of dust.

In general, pure dust has jagged edges. However, if the dust is thickly coated, it appears spherical again; this is called “smoothed dust.” A smoothing effect can also happen if water binds to dust and then evaporates.

Knowing exactly what each type of dust looks like will support efforts to more accurately identify them in satellite images, and understand how each type will behave in the sky. 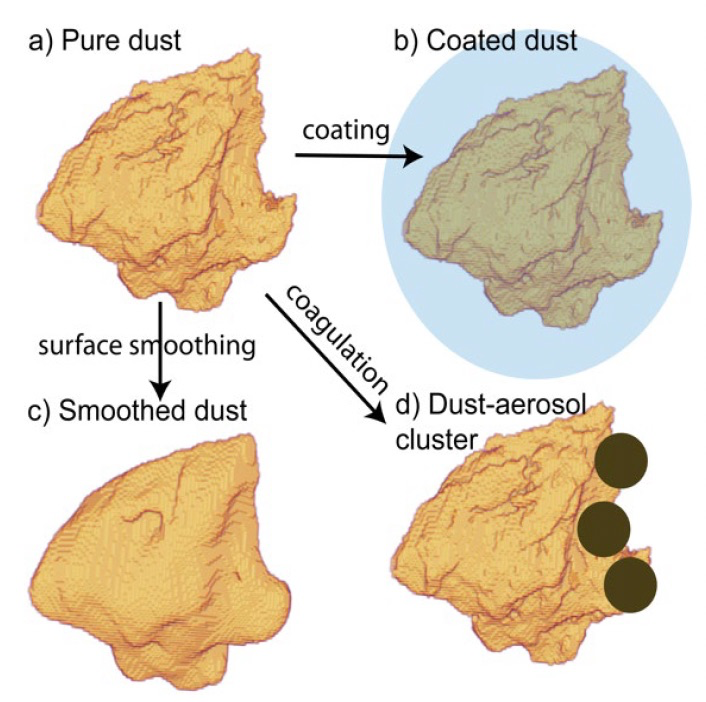 Different combinations of dust and pollutants take different shapes, which can be identified in the atmosphere through a combination of satellite data. (Image courtesy Zhibo Zhang)

With the dust models in hand, Zhang’s team will calculate how the dust would interact with different particles it might encounter in the sky, like water, smoke, or industrial pollutants. Specifically, they will estimate how the dust would reflect—or “scatter”—light that strikes it. The scattering pattern depends on how rough or smooth the dust is.

The researchers will also analyze observational data that measure how dust all over the globe is scattering light. “Then we’ll combine lab measurements, the scattering calculations, and these satellite observations all together,” Zhang says, to answer the project’s ultimate question: Is dust and its interactions with other particles warming or cooling the planet, and how much?

Zhang’s research group melds computer science, physics, and climate science to address some of the least understood factors contributing to global climate. The new project will further those efforts, with the potential to clarify what roles dust and other atmospheric particles play. Along the way, it will also prepare students for successful careers in science.

“The new grant is indeed based on the success of the students. They laid the foundation for this project,” Zhang says. Much like his students, he adds, “I’m excited to take this essential next step in addressing an issue that affects our planet so profoundly.”