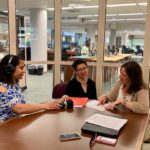 UMBC faculty are leading interdisciplinary, community-engaged immigration research that is shifting the relationship between higher education institutions and immigrant communities. Their approaches include centering the economic, academic, social, and cultural contributions of immigrants to the well-being of U.S. cities. This scholarship challenges stereotypes and also works to dismantle systemic racism in higher education.

In 2020, New York Times reported that U.S.-born children of immigrants or immigrant students raised in the U.S. accounted for nearly 60 percent of the growth in U.S. university enrollment since 2000. The majority of these students are the children of international students from India who stayed in the U.S. to work, and the children of Latin Americans, and refugees who came to the U.S. in search of better living conditions.

Felipe Filomeno, associate professor of political science and global studies, and associate director of the Center for Social Science Scholarship, and Christopher Brown, a global studies lecturer, explore how immigrant students can be an asset to higher education with their study “Immigrant Students and Global Education.”

“It is important that there are such stellar colleagues committed to the vital work of exploring the realities, lived experiences, and challenges of our immigrant communities,” says Kimberly R. Moffitt, dean of the College of Arts, Humanities, and Social Sciences. “We can only thrive as a society by supporting and working together with all members of our community and recognizing their contributions to a global society.”

Digital storytelling for education and advocacy

Several of UMBC’s community-engaged researchers use digital storytelling to shift the focus away from the researcher creating information toward information being created by the community. One such project is “Intercultural Tales: Learning with Maryland’s Immigrant Communities,” developed by Thania Muñoz Davaslıoğlu, assistant professor of modern languages, linguistics, and intercultural communication (MLLI), and Tania Lizarazo, associate professor of MLLI and global studies. 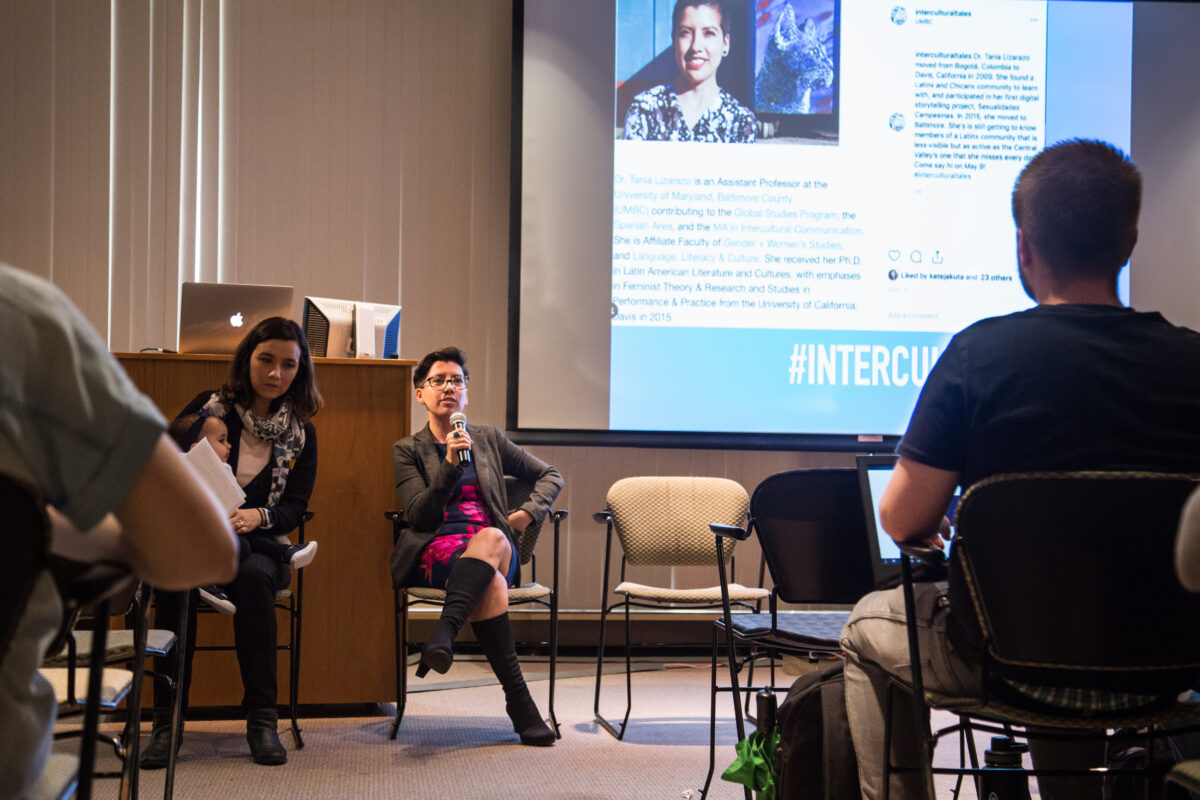 This project approaches digital storytelling from a feminist lens where non-academic knowledge such as lived experience is considered equally valuable in teaching and research. “Our project is informed by feminist theory and the field of critical intercultural communication in which power structures and hierarchies are emphasized when thinking about communication,” says Lizarazo, “Intercultural Tales is shaped by all of these fields/practices to facilitate (not guarantee) a more nuanced understanding of immigration as part of UMBC (instead of outside of it).”

This project, now in its third year, brings together students studying Spanish or global studies to produce digital stories of immigrant experiences with the goal of countering stereotypes. In one of the digital stories, “Pack Your Bag,” Heejin Hong ’18, MLLI, speaks of her parents’ transition from Korea to Paraguay, her time living in Brazil, moving to Mexico, and eventually settling in the U.S.

“My parents were first-generation immigrants from South Korea to Paraguay, where I was born. Their life as immigrants was not easy. They worked day and night to support our family,” Hong shared. “They constantly moved to other cities and countries looking for work. When I was little, I moved to Brazil to be with my grandparents because my parents had to work. Brazil was my first experience with immigration and learning a new language, new places, new food, and new cultures.”

She continued, “I have now been living in the U.S. for more than ten years. I used to see all of the changes that made me grow up quickly and think of what I didn’t have. Now, I realize that I gained something greater: courage, independence, patience, a positive outlook, not to lament, and to keep moving forward.” 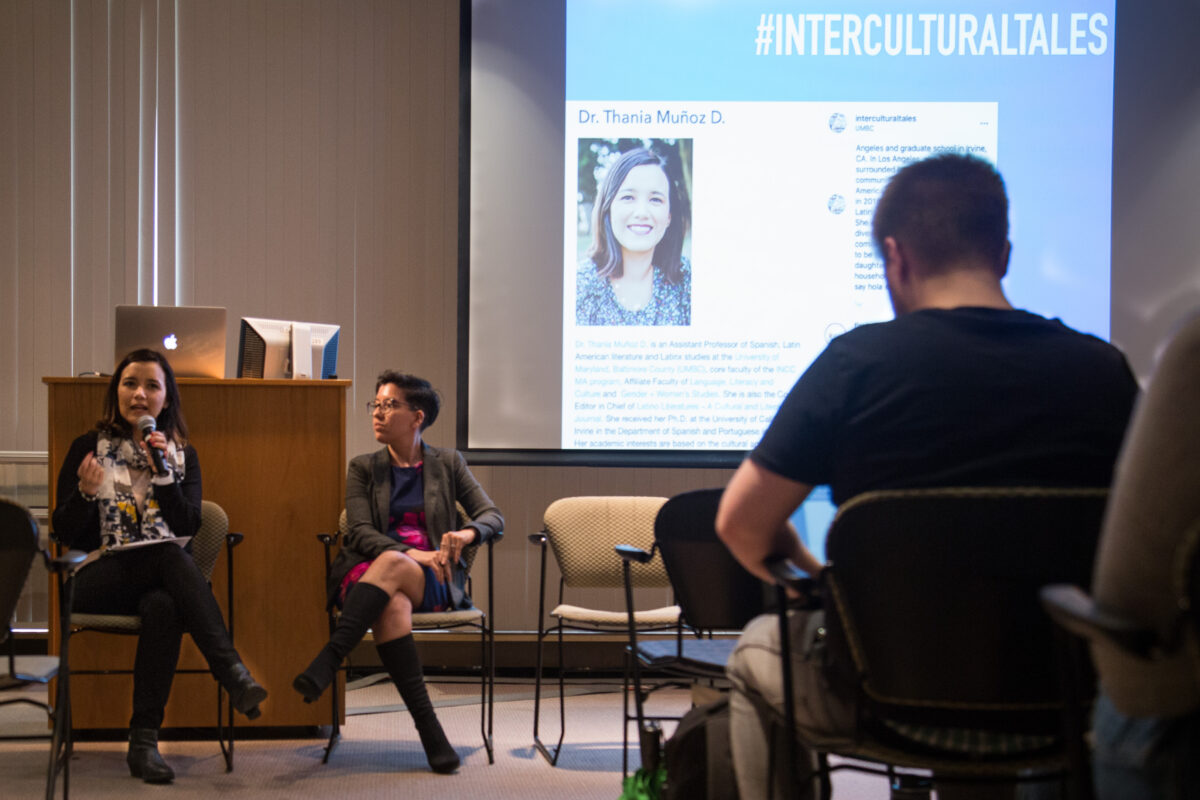 Muñoz notes the findings, which were published in the Journal of Community Engagement and Higher Education, show the process of sharing and valuing knowledge through the project in some cases enabled the students to reframe fear, confusion, and shame through a new lens that revealed feelings of pride, solidarity, and insight.

“Most students had a more nuanced understanding of immigration,” says Lizarazo, “and a renewed appreciation for their classmate’s knowledge, which, in turn, shaped a less hierarchical learning space.”

Lizarazo also collaborated with local immigrant women to create “Moving Stories: Latinas en Baltimore.” The digital storytelling archive visualizes the immigrant experience from the perspective of Latinas in Baltimore. It aims to dispel stereotypes and share the diversity of their experiences.

Camila Daniel shared her experience of being a Black-Brazilian Latina living in Baltimore in her digital story “When Baltimore Became My Home.”

“In 2006 when I came to Baltimore, I lived the experience of what it means to be Black and Latina at the same time in a country that expects people to be only of one race. When people saw me with my accent, my hair, and my Black skin, they assumed I was African American. Many of the Brazilians were white. I didn’t feel I fit in anywhere. I suffered a lot,” says Daniel.

She continues, “Now, I feel it was good for me to come to Baltimore, live in a predominantly Black city, and learn from Black people what it is to have pride in how you look and your history. At the same time, with Spanish and Baltimore, I have created a family that does not have my blood or nationality but one heart.” 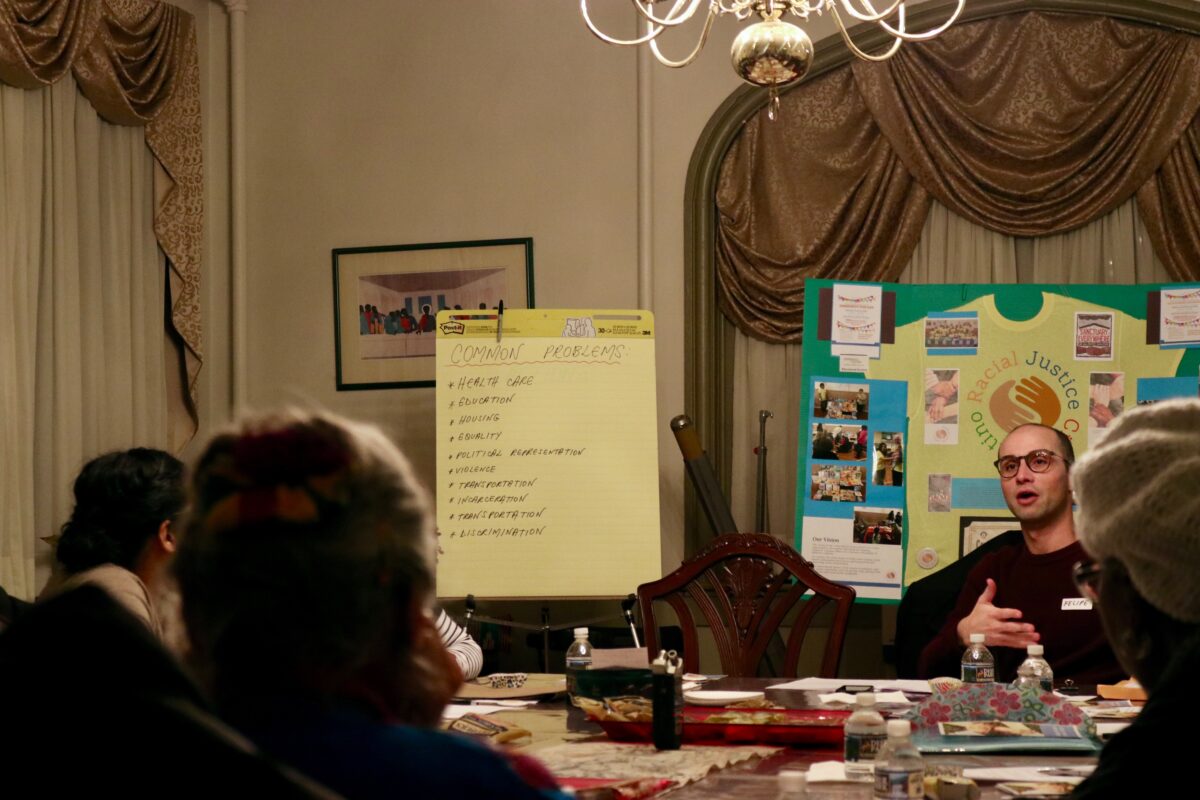 Since 2017, Lizarazo and Filomeno have also worked in partnership with Baltimore’s Latino Racial Justice Circle to develop, design, execute, evaluate, and share the “Honest Conversations on Immigration” project. Through dialogue, and digital storytelling, the program fosters conversations between U.S.-born citizens and immigrants that share faith-based spaces but rarely engage in dialogue. Since 2019, about 85 members of 15 congregations have participated.

“Our goal as researchers is to use dialogue and digital stories as ways to bring different communities together around religion, race, and immigration,” explains Filomeno. “Through that process, we hope to create the potential to change the relationships among individuals, and between communities and society for the better.”

Filomeno last year received the Hispanic Heritage Award from Baltimore Mayor Brandon Scott in recognition of his work facilitating dialogue as well as an earlier comprehensive assessment of Baltimore’s immigration policies. The study “Baltimore’s Policies to Attract and Retain Immigrants: A Community-Engaged Evaluation” was critical in shaping the strategic vision of the Mayor’s Office of Immigrant Affairs. It built on a prior study in which Filomeno reviewed Baltimore’s economic development, multicultural, and law enforcement policies, collaboration with civil society, and policy advocacy.

“In all these studies, I have engaged local groups and organizations in the creation of knowledge about immigration and the application of this knowledge to help solve real-world problems,” says Filomeno. “This research has helped a local government trying to encourage the city’s growth through immigration, a faith community trying to build connections between congregants of different nationalities, and a university trying to leverage student diversity of national origin to promote global learning. As we say at UMBC, it is public research for public good.”

Documenting places of belonging and meaning 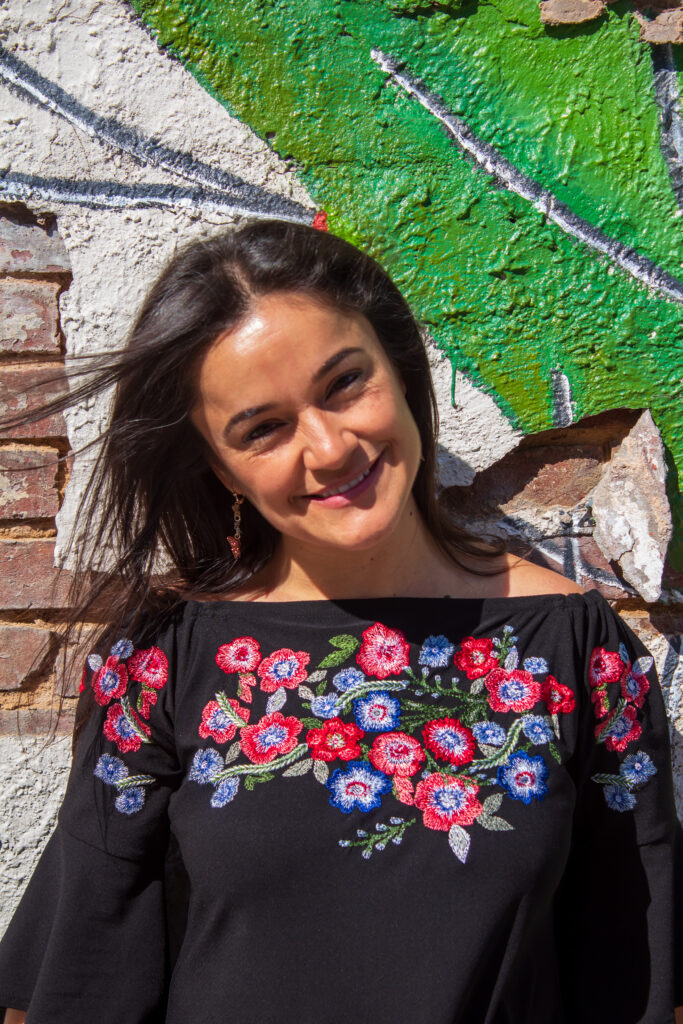 Beyond Maryland, Yolanda Valencia, assistant professor of geography and environmental systems, explores the Mexican immigrant community of Pasco, Washington, and how this community creates places of peace, tranquility, and family—places of belonging and meaning—under disadvantaged conditions. In the forthcoming book Relational Life: Legal Death, Valencia draws on years of fieldwork in Pasco, transnational ethnography, archival research, interviews with city leaders, and testimonies from undocumented Mexican immigrants.

“I aim to provide a historical political economy analysis of geographies of oppression overlaid with an analysis of spaces where this community thrives, as they both happen simultaneously across scale, time, and border,” says Valencia.

This year, Valencia received a 12-month Career Enhancement Fellowship, funded by the Mellon Foundation and administered by the Institute for Citizens and Scholars. She was also selected as a 2020 – 2022 Summer Institute on Tenure and Professional Advancement (SITPA) scholar. The mentoring and professional initiative is designed to facilitate junior faculty members’ successful transition to tenured associate professor status. 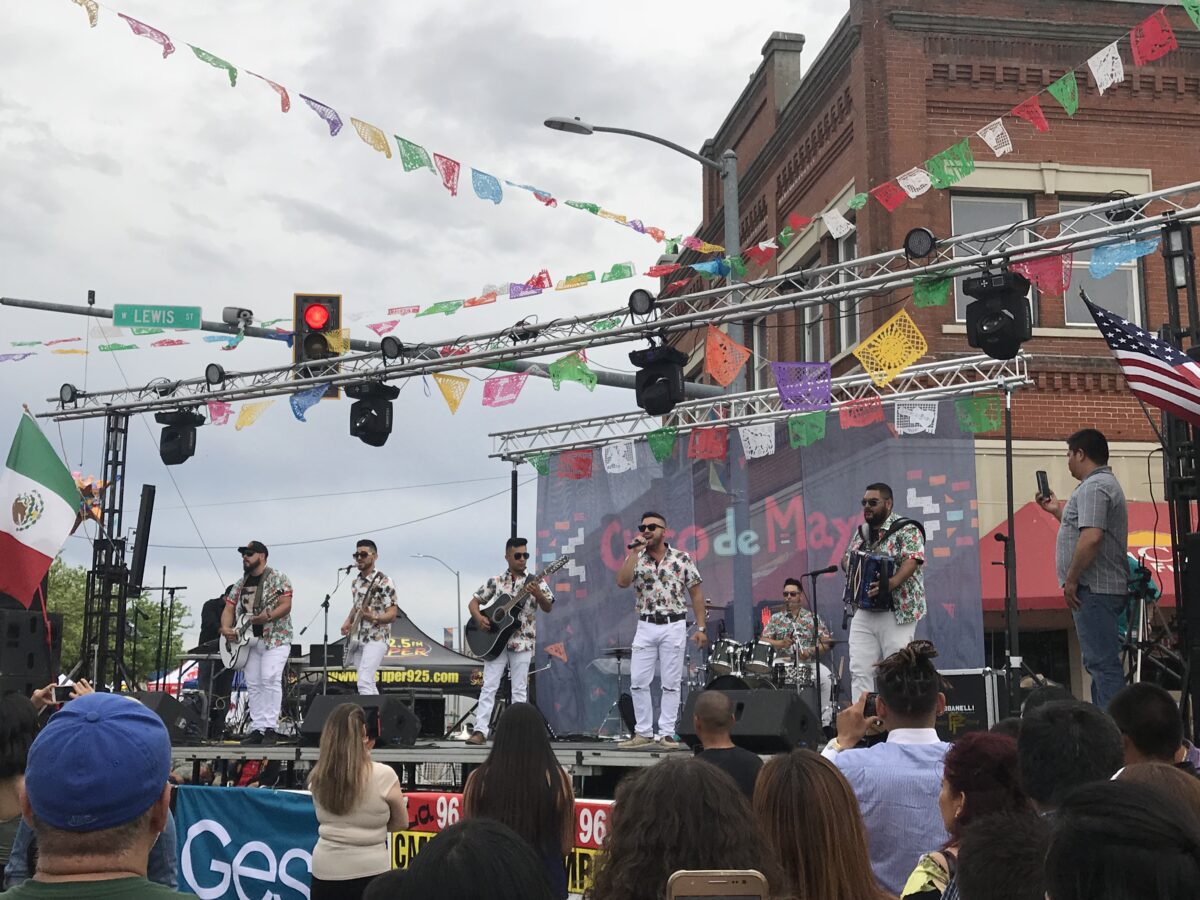 This Cinco de Mayo event in Pasco features second-generation Mexican immigrant musicians who have learned how to play, sing, and love traditional Mexican (and Latinx) music. Photo courtesy of Valencia.

Another faculty member has been highly engaged with immigrant communities in New Orleans. The success of taco trucks and Soul Food pop-ups there have raised complex questions about food truck regulation, worker rights, and immigration. The Whiting Foundation awarded a $50,000 Public Engagement Fellowship to Sarah Fouts, assistant professor of American studies, along with local New Orleans organizers Toya Ex Lewis and Fernando López, to implement “Project Neutral Grounds: At the Intersection of People, Street Food, and the Hustle.”

Lewis is the organizer of Project Hustle, born in New Orleans, and López is a Mexican-born documentarian. The three partners have worked together since 2013. Their latest collaboration will bring together Black, Brown, LGBTQ+, and immigrant food vendors in New Orleans to celebrate, share, and document their experiences and histories. 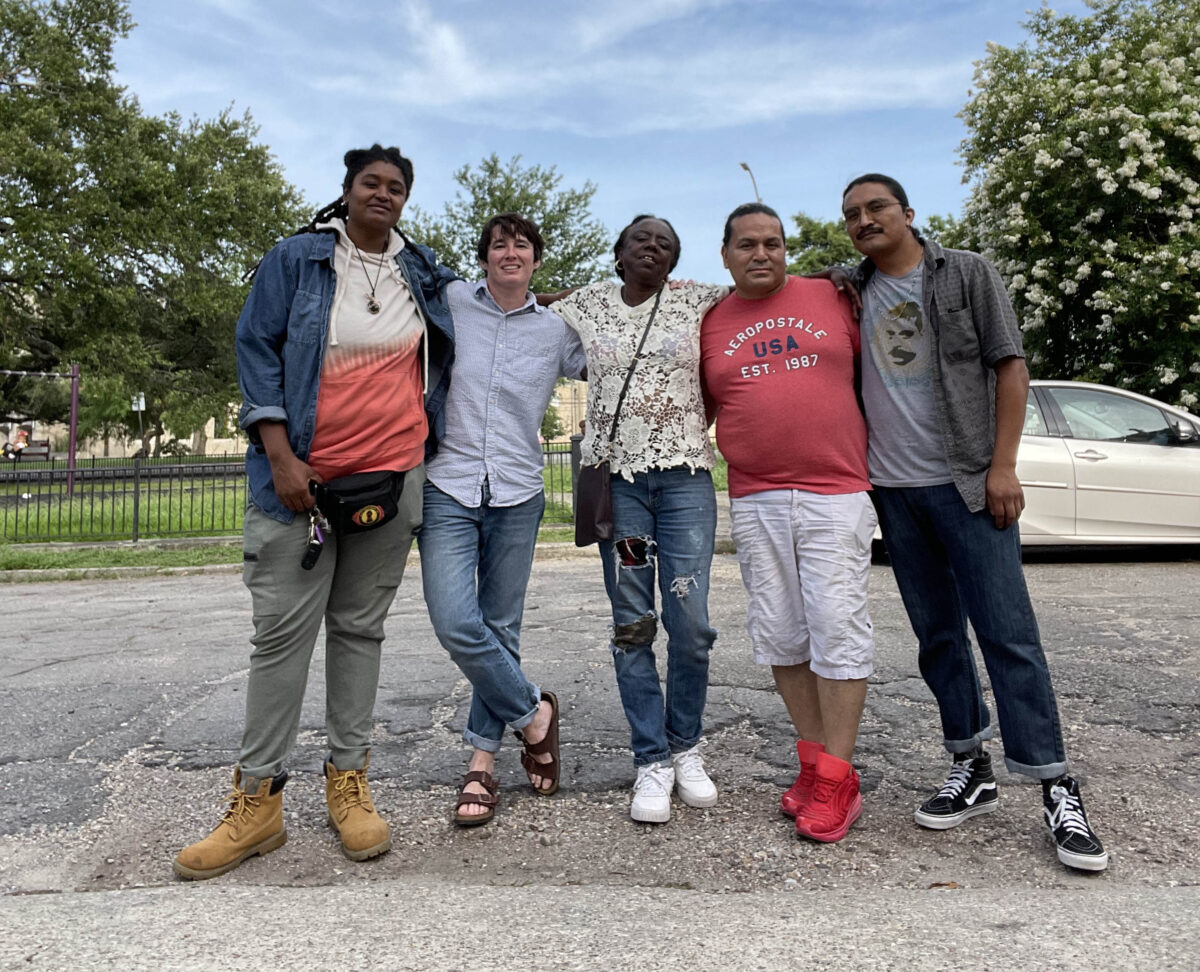 This innovative research intentionally values the knowledge of immigrants and creates new ways for academics to think about primary sources. It highlights thriving communities and enables communication, personal reflection, and empathy while challenging systemic racism and the role of education and institutions in perpetuating inequalities.

“Recognizing each other’s humanity is not an abstract process. It requires a commitment to questioning pedagogies that reproduce the hierarchies we critique,” Muñoz Davaslıoğlu and Lizarazo explain. “Teaching and learning are inextricable from struggles against the dehumanization of immigrants and minorities.”