IMPORTANT: You are using an older version of Other that may not be supported in the future. Upgrade Now
Classic
UMBC News & Magazine
Institutional Group • 20 people
6

Manil Suri’s new book, “The Big Bang of Numbers,” introduces readers to the wonder of math 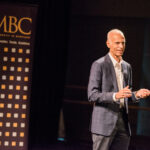 It’s rare to meet a mathematician who is also a bestselling novelist, but UMBC’s Manil Suri, professor of mathematics, is happy to be unique. Suri is the author of a famed trilogy named for Hindu gods, including The Death of Vishnu (2001), which was long-listed for the Booker Prize, The Age of Shiva (2008), and The City of Devi (2013). He recently published his latest book, The Big Bang of Numbers: How to Build the Universe Using Only Math, to global acclaim.

The Big Bang of Numbers is Suri’s first nonfiction book, written to show people who aren’t necessarily fond of math that the discipline is foundational to our world—and can even be fun.

“The concept is intriguing, if hard to get your head around: Can you understand the creation of the universe purely through basic mathematics?” writes The Washingtonian. Suri’s answer with The Big Bang of Numbers is a resounding ‘yes.’ The book “explores many areas of seemingly pure math that explain the natural world, from the shapes of galaxies and living creatures to weather, gravity, beauty, and even art,” Kirkus Reviewswrites.

In his role as math professor, Suri works hard to convince his students that math doesn’t just matter, it is also endlessly interesting—extending his instruction well beyond the basics of calculations and into the field’s fundamental ideas.

“All your life, you keep hearing that maths is all about calculations,” Suri told Telegraph India, “while in essence, maths is all about ideas.” Suri first expounded on this theme in a 2013 New York Times op-ed, “How to Fall in Love with Math.” When the op-ed became shockingly popular, the idea for a book grew from there.

Manil Suri speaks about The Big Bang of Numbers at a special event to mark the book’s publication and success on November 14 at UMBC’s Albin O. Kuhn Library & Gallery.

With The Big Bang of Numbers, which the Wall Street Journal has called “imaginative and organized,” Suri isn’t just seeking to help a wider audience understand or feel comfortable with math, but feel a sense of fascination with it. According to the Mathematical Association of America, Suri’s approach—rich in humor and narrative elements—goes beyond “simply telling the reader about these ideas”; instead, he “allow[s] readers to experience the attitude of curious exploration that attracts mathematicians to the discipline, but is often absent from low-level math classes.”

“With evocative and engaging examples ranging from multidimensional crochet to the Mona Lisa’s asymmetrical smile, as well as ingenious storytelling that helps illuminate complex concepts like infinity and relativity, The Big Bang of Numbers charts a playful, inventive course to existence,” writes the Deccan Herald, which named the book its “read of the week” in mid-October.

For Suri, while the book was very different in some ways from his previous works of fiction, The Big Bang of Numbers hews closely to his style that relies on humor and engaging narrative to draw the reader into unfamiliar topics. His novels all take place in India, a place that feels far away and unknown to many of his readers. “After explaining India in three internationally released books to many readers who didn’t know much about the country, I was ready to take on an even bigger challenge,” he told Frontline, a major English-language magazine in India, “—explaining mathematics to a general audience!”

Manil Suri speaks at GRIT-X, an event during UMBC’s Homecoming festivities, in 2018.

Math as a game

“Usually math is thought of as something that we invent, perhaps, to explain things around us. I’m kind of reversing this perspective and saying that math is the true driver of the universe, and the universe itself is a model of the mathematical principles,” Suri recently told NPR’s Marketplace.

Put another way, the Sunday Times of London explains the central thesis of the book is that “maths, the creative language in which reality is written, is ‘the life force that drives the universe,’ and you could build one—stars, worlds, you and me—from scratch using maths alone.” The review notes, “It sounds intimidating, but Suri has a knack for clarity and a welcome habit of grounding tricky concepts in the tangible.”

In the end, according to Suri’s book, math is a “force that forever enthralls, not just through the answers it gives but also through the new mysteries it poses.” But he hopes his readers will also understand math as a game.

“For mathematicians, I suspect the most appealing characteristic of the subject is its playfulness,” Suri told Frontline. “Maths is a game in which you start with a bunch of rules and then deduce away to see where you can get. You can play it anywhere—in the shower, on the bus, while eating lunch—all you need is your mind.”