IMPORTANT: You are using an older version of Other that may not be supported in the future. Upgrade Now
Classic
Women's Center
Institutional Group • 1681 people
14

Positionality Statement: This post is written by Marybeth Mareski, a Returning Women’s Scholar and social work intern at the Women’s Center in her final year at UMBC. I am a gender nonconforming lesbian in the queer and trans community, and I am in social work school with the professional goal of providing therapy to primarily queer and trans clients. I write this post as a summary of the recent anti-trans legislation, to draw attention to some of the underlying motivations, and to offer suggestions on how to support the queer and trans community.

Almost as if they had no intentions or ideas about how to solve any of America’s actual problems, lawmakers have made this the worst year in American history so far for anti-trans legislation, with more than three anti LGBTQ laws being filed each day in 2022.

These bills tend to fall into three main categories:

When society is suddenly up in arms about something that presents very little if any actual harm, it is time to wonder if we have a moral panic on our hands.

Image Description: A high school student with blue eyes dressed in football gear stares into the camera as he spins a football in his hands. From the excellent “Kris Wilka Just Wants to Play Football.”

Moral panics are a phenomenon where a behavior or group of individuals is targeted for public concern that is far in excess of the actual danger presented. Moral panics are beneficial to the state, because they amplify the powers of the law, and beneficial to the news media, because coverage of these moral panics drive viewership and advertising revenue. For instance, as the the US legislative apparatus spends its time keeping trans kids out of the sports of their choice in late March and early April, Fox news aired 170 segments discussing trans people over those three weeks, including Tucker Carlson’s lie that kids are trans because of adult predators. What is the outcome of programming like this? Increased viewership and ad revenue to Fox News, and increased public attacks against LGBTQ people: a recent example includes a family with two dads who endured a man screaming at them on a train that they were pedophiles who had had stolen their own children.

Republicans hammer on moral panics like trans issues and Critical Race Theory to mobilize their base. This sort of outrage is very effective at bringing voters to the polls, but it leads to uncertain outcomes: 67% of national voters oppose legislation that prohibits trans athletes from playing on their team of choice. Fascinatingly, it is not because most Republicans support trans athletes – it seems to be because voters find the involvement of the law itself in this issue to be distasteful.

At the risk of giving too much credit to the American voter, is it not also clear that spending effort on legislating this issue is a huge waste of time? Nearly one million Americans are dead from Covid. Inflation is the highest it’s been in forty years. Housing costs have gone up more than 25% since March 2020. How is keeping trans kids out of sports improving the lives of Americans? 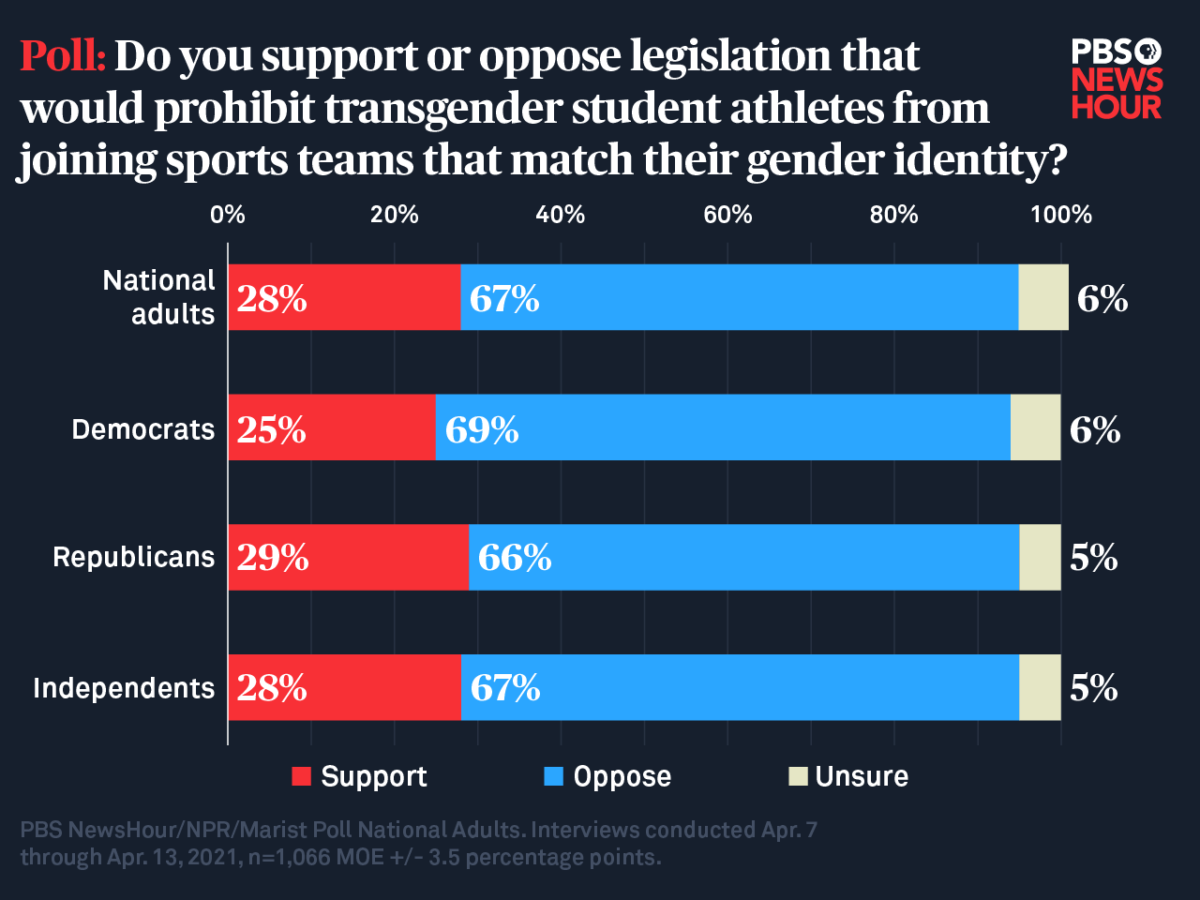 Image Description: A PBS News Hour poll showing that over 66% of respondents in categories of all adults, democrats, republicans, and independents oppose legislation prohibiting transgender student athletes from joining teams that match their gender identity

Transness is Not New

The notion that children who believe themselves to be trans are being ‘groomed’ by LGBTQ adults is an age-old fearmongering tactic. It stems from the right-wing ideology that being LGBTQ is unnatural, and therefore queer kids must have been indoctrinated into being queer, which is absurd on its face: one of the biggest mental health threats that LGBTQ people face is rejection from their own families. It is not seeing representations of the sinful urban lifestyle that converts innocent children into being queer – young people discover their own LGBTQ tendencies, do not feel safe in their own communities, and move to the diverse urban centers where they are free to be fully themselves.

What about concerns that such an increasing number of young people are transitioning that it must be a trend?

Obstacles to transgender care have been immense. The psychiatric community has controlled access to gender-affirming services, and the terms of that access has been giving the answers that caregivers demanded to hear. Once barriers are lowered and the stigma is decreased, the natural incidence can be allowed to emerge. Take the history of left-handedness, for instance. In the early 20th century, left-handedness was seen as unnatural and punished, and rates of left-handedness were artificially suppressed. Once that stigma faded, rates rose more than ten percent in the population to their natural level, and remained there. Has being trans been vanishingly rare, or has being able to be trans been vanishingly rare?

Lukas Avendano, a Zapotec muxe performance artist. Image description: a bare-chested individual in skirts and jewelry and makeup stares off into the distance with a slight smile

Being trans is not new. People with a gender expression beyond biological male and female have always existed:

“… cultures worldwide have often recognized genders other than “male” and “female.” India’s hijra, which has existed for millennia, has an essential place in Hinduism and a socio-cultural role as performers. Judaism recognizes no fewer than six distinct sex¹ categories in its classical texts and tradition. In Oaxaca, Mexico, the third gender muxe dates back to the pre-Columbian era. The South Sulawesi Bugis people recognize five genders which have been crucial to their society for at least 600 years. – The Gender Binary Is a Tool of White Supremacy

And just as people throughout millenia have expressed their identity beyond the gender binary, researcher Jules Gill-Peterson found evidence that young people have been socially transitioning throughout the twentieth century, and attempting to transition medically for as long as medical transition as existed:

“I found handwritten letters from trans kids to a famous endocrinologist, Harry Benjamin, who was known for providing trans healthcare. In the 60s and 70s, they would say, “I’m X years old. I’m a transsexual. I read about that in the news” or “I looked up your work at a library, and it describes who I am”. They were from all over the country and they would ask if Dr Benjamin could see them, send them hormones, give them a permit to wear the clothes they wanted, talk to their family or teacher. It was young kids knowing really clearly that they were trans and going toe-to-toe with medical professionals. Suddenly, I had not only proof that kids were trans, but that they contacted doctors and tried to transition the best they could. It speaks to the remarkable ingenuity and resilience that trans young people have had for a really long time. And it’s pretty unimpeachable evidence that this is not a new social phenomenon. It’s not some trendy thing that kids are picking up now.” – ‘Trans kids are not new’: a historian on the long record of youth transitioning in America

What Can You Do?

ACLU lawyer Chase Strangio and writer and activist Raquel Willis used the occasion of the Trans Day of Visibility to devote an entire week to activism against these bills. They created a website called Trans Week of Visibility and Action which outlines many of the bills in question, some of which are still in session, with links to scripts to write to lawmakers, as well as links to local, trans-led grassroots organizations that are helping trans kids in each state. In Maryland, Trans Maryland is a “multi-racial, multi-gender, trans-led community power building organization dedicated to Maryland’s trans community” which works to pass trans-affirming bills in Annapolis and promote trans-inclusive health care in Maryland, as well as offering legal and financial support for name changes for trans people and a weekly digital support group – follow them online for action alerts for Maryland-based trans-related legislation, or donate to help support their cause.

Baltimore Safe Haven is a trans-led organization that provides services to the trans community members in survival mode. They offer a drop-in center, transitional housing, youth housing, meal services, and more. They are seeking volunteers, donations, and wish list purchases.

Trans people have always been on the forefront of LGBTQ+ rights, because society is so hostile to trans people that they so often have to fight to simply survive. We can call this bravery or resilience, and it is, but it is also the result of trans people being forced to constantly advocate for themselves, with little help from other, less marginalized groups. If you are cis, what about helping the trans people in your life, or clearly identifying yourself as an ally to them?

Modeling trans-inclusive behavior increases the safety, comfort, and well-being of trans people around you. The National Center of Transgender Equality has a list of actions you can take that include challenging anti-transgender remarks, supporting trans people who experience discrimination, ensuring non-gendered bathrooms in your spaces, crafting anti-discrimination policies for trans people in your workplace, writing your representatives about laws related to trans people, and working to make sure that systems you are involved in are trans-inclusive.

Does none of this sound direct or effective enough? Are you a financially stable person with privilege? The most immediate way to make an impact for young trans people fighting for their survival is to give money to them directly. Here are some twitter accounts that crowdsource black trans people who need help paying their bills:

Keep an eye out for trans people in your social media network who are crowdsourcing for their survival, and make a point to donate to them. More than signing a petition, you can be sure that you had a part in taking care of a trans member in your community.

Survival in America is difficult enough these days. Making the existence of trans children into a moral panic is a cynical and cowardly move by transphobic lawmakers who are attempting to draw focus away from failures of governance. But at the end of the day, we are all suffering from these failures of governance, and the best way to continue to move forward is to dedicate ourselves to the notion that every life has value by supporting each other.

The Gender Binary Is a Tool of White Supremacy

‘Trans kids are not new’: a historian on the long record of youth transitioning in America

Trans Week of Visibility and Action

Supporting the Transgender People in Your Life: A Guide to Being a Good Ally