IMPORTANT: You are using an older version of Other that may not be supported in the future. Upgrade Now
Classic
Women's Center
Institutional Group • 1664 people
10 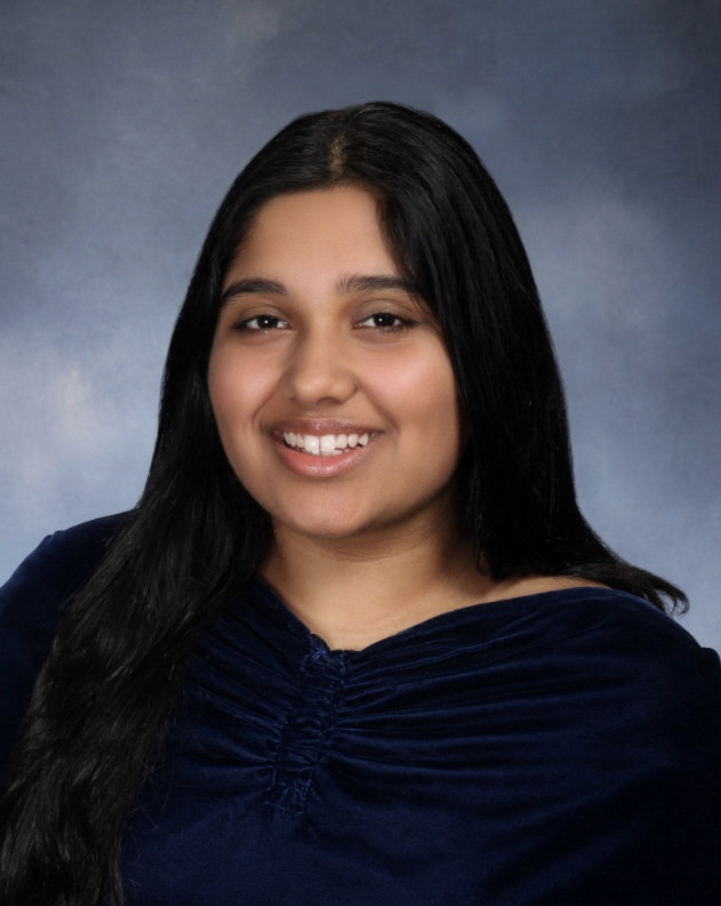 Positionally Statement: This post is written by Ojus Phogat, a second-year student at UMBC and a student-staff member at the Women’s Center. In writing this blog, I hope to shed light on one of the many ways in which individuals who experience menstruation are disenfranchised by the medical community, who so often fail to effectively diagnose menstrual irregularities in favor of prescribing the “birth control band aid” because they fail to believe and understand their patients’ issues. The following blog speculates as to how and why birth control is seen as the holy grail of menstruation issues when it, in fact, does not treat the problems at hand. I do not claim to be an expert on the uses or effects of birth control, nor am I situated in any position within the medical field myself, meaning my qualifications for discussing such issues are only through the lens of a patient. I aim not to blame providers but rather to expose the inefficiencies present in obtaining medical care for gynecological issues. This piece in no way aims to negate the necessity of birth control and its role as a contraceptive, as it should be accessible to all I with stand all those who are fighting for access to healthcare and autonomy over their bodies. Note: this piece uses the terms: The Pill, birth control, hormonal birth control, and contraception interchangeably to refer to the hormonal birth control pill.

ID: Someone looking at a calendar filled in with three weeks of blue squares and one week of yellow squares. The calendar rests against a blue background.

I was 12 years old the first time I experienced irregularities in my menstrual cycle. I had gone through a six-week period of continuous heavy bleeding with no indication of nearing an end. I knew as much about menstruation as a child who had experienced their first period could, and as such I was more embarrassed than concerned by my condition. It wasn’t until the bags under my eyes looked like craters, and the brown of my skin gave way to a ghostly gray that I took steps to get help.

The medical care that ensued consisted of blood work, ultrasounds, and multiple gynecological visits before I was given some “remedy” to my apparently undiagnosable problem. A remedy that promised not only to “regularize” my cycle but also one that allowed the doctors to put the diagnosing efforts on the back burner as they congratulated themselves for a job well done. When these same symptoms resurfaced in my junior year of high school (approximately five years later), I was again given this same magical quick fix: a surface-level solution that hid rather than resolved my issue. That solution being none other than hormonal birth control. 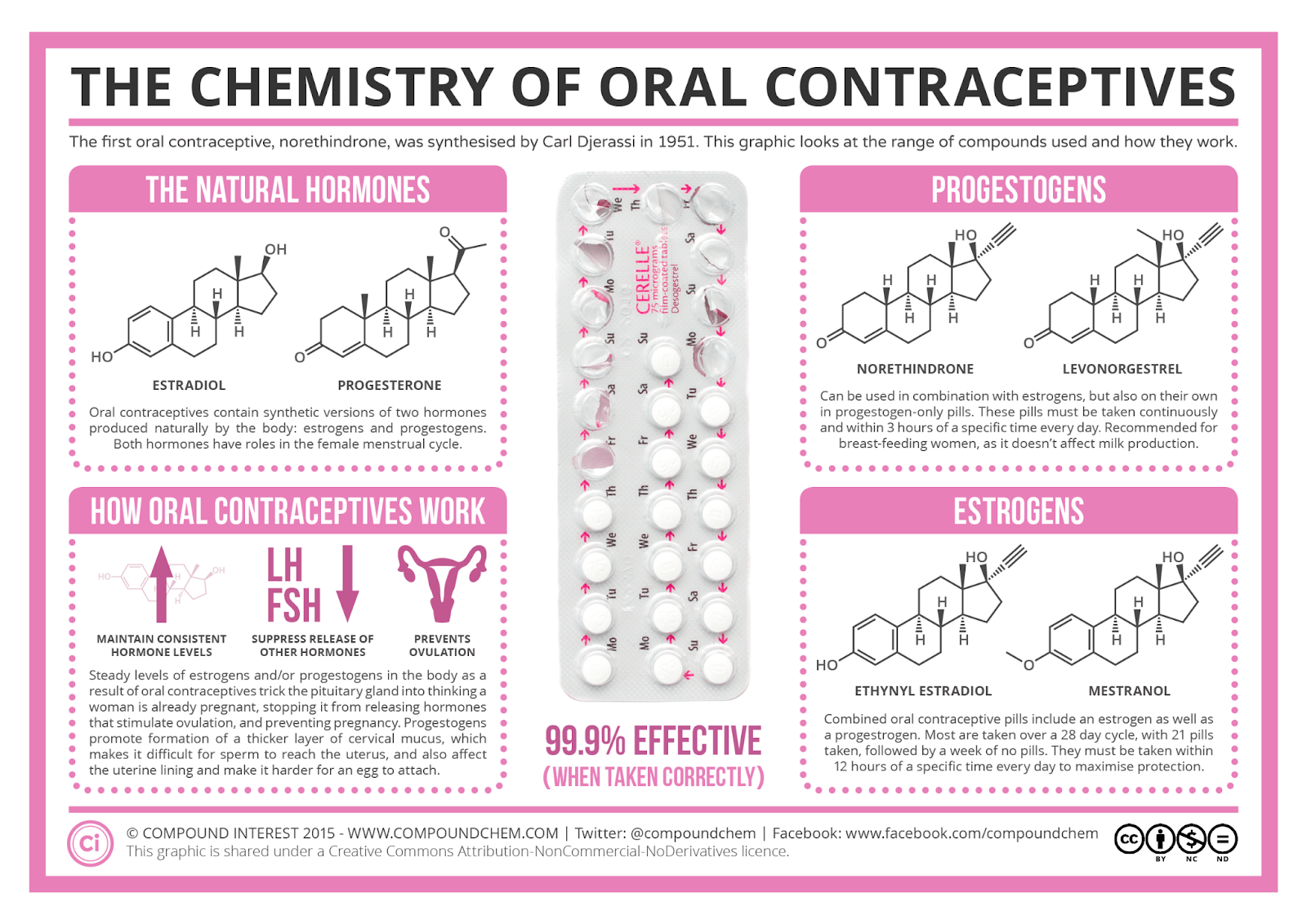 ID: The image displays the chemistry behind oral contraceptives, particularly the different hormones present in the body and how they are impacted by the use of contraceptives. The top left discusses the natural hormones

If you aren’t yet aware of the absolute agony that hormonal birth control can be for some, allow me to open your eyes. Here are just some side effects of The Pill: nausea, vomiting, stomach cramps, bloating, fluctuations in appetite and weight, depression, blood clots, and strokes. I call on these primarily to situate your understanding of the immense impact that these tiny 15mm pills can have on the body and the mind.

I know my story is not dissimilar to others in my life—both friends and colleagues—who resonated with an experience where insufficient health solutions facilitated the loss of well-being and health. The unfortunate reality is that a lack of effective medical care is pervasive, particularly when discussing menstrual issues. The long road to diagnosis and helpful treatment is one that I recognize many people are forced to take, the consequences of which have altered their ability to live a life they deem to be acceptable.

It is important to note that this phenomenon is not new. Persons with menstrual ailments, whether or not they are related to chronic illness, have always been met with resistance when attempting to access proper health care in which their symptoms are clearly addressed. Such poor treatment by medical providers is an everyday struggle in the world of disability and chronic illness, in which people and their pain are ignored.

The world of menstruation is complex. It is a bodily phenomenon that is all-consuming and one that leaves no area of the body or mind untouched. When one experiences this phenomenon abnormally, as  many do, their needs are habitually diminished and care foregone in place of a single band-aid solution: hormonal birth control. Whether it be polycystic ovarian syndrome (PCOS), endometriosis, menorrhagia, etc. (all very different conditions), or even when lacking a clear diagnosis, the answer always seems to be The Pill.

The Pill as a Cycle Regulator

I often ask myself: why it is that the medical community could even fathom such an intricate and enigmatic cycle (that differs from person to person) to be regulated by what is essentially a single remedy, especially when the remedy in question can have so many negative side effects?

In researching this further, I find the blame to lie in part with the medical community but more so on marketing and political agencies that have come to control the narratives of The Pill as medication and its uses. I speculate that this standard of care for menstrual issues has to do primarily with cultural stigmas surrounding menstruation and contraception and the way they have been handled in the legal-political sphere.

The historical rhetoric surrounding both contraceptives and menstruation seems to be resoundingly negative and rooted in pervasive cultural stigmas that deem those seeking sexual health care to be shameful and promiscuous. The irrational fear is that increased access to contraceptives allows individuals to be sexually irresponsible which promotes vice. Even Gregory Pincus (the scientist responsible for the research and development of birth control) concerned himself with it as a scientific quest and not one rooted in sexual freedom for women (which he too strongly opposed).

The origin of birth control was always marked by the stigmatization of any attempts to control conception, so much so that the form of The Pill on the market at the time was marked as an “obscene and illicit” material by law and therefore prohibited to be used for the purpose of preventing pregnancy. In the United States, the Comstock law of 1873 expressly forbade the distribution, discussion, research, or advertisement of contraceptives which encompassed a stronger version of today’s birth control pills.

You might be asking, “Well, with all this red tape, how on earth did they come to create and distribute The Pill?” In answer,  birth control was marketed primarily as a mechanism for menstrual cycle control, as opposed to as a contraceptive, and could only be prescribed as such, mainly to married women. A similar phenomenon occurred in Canada with the 1892 Criminal Code which criminalized the sale or distribution of birth control since it was considered “illicit” material. As laws were adapted, birth control became available for use solely as a cycle regulator in 1960 and that practice accelerated its popularity as a prescription drug in the medical world.

The standard of care that remains in the modern-day continues to “regulate” menstrual cycles by administering birth control.

Since its arrival on the market, The Pill has been used for the process of cycle regulation, when it was developed and intended to be a temporary mechanism for controlling whether one conceived or not. Even today, it remains unlike other modern medicine as it is “prescribed routinely and by default”.

I can only speak as an individual on the patient end of the health care process who is dissatisfied with the medical care I have received thus far. It is disheartening to experience the sheer lack of options held by persons with menstrual issues when it comes to claiming agency over their health and to be poked and prodded for years only to remain in a state of unknowingness.

The incorrect notion perpetuated by ineffective gynecological health care remains: menstruating individuals’ health matters less and will be treated as such. Because of this sentiment, the burden of care falls on individuals. It is critical to take note of the patterns and behaviors of your body. In doing so you may know how to better recognize and approach signs that may indicate menstrual disorders.

ID: The image is an infographic titled “Key Issues to keep in mind when assessing menses”. The bullets are as follows: remember to use menstrual cycle as a vital sign; even in the first year of menarche most girls have a period every 90 days; irregular periods even those resulting in anemia may be a sign of polycystic ovary syndrome; remember to screen for chlamydia in patients with heavy or irregular menstrual bleeding, teenagers with heavy bleeding should be screened for a bleeding disorder with at least a complete blood count (CBC), ferritin and thyroid-stimulating hormone level; the most common bleeding disorders associated with heavy menstrual bleeding include platelet function disorders and Willebrand disease; only draw von Willebrand testing during the first 3 days of a menstrual cycle when estrogen levels are at the nadir)

If you are facing menstruation-related issues, I urge you to stand your ground in the exam room. While it is likely that your journey to diagnosis and productive help may not be easy, it is critical to actively protect your physical and mental self. You deserve appropriate care that works to treat rather than hide your ailments. Knowing the ways in which you may advocate for yourself in medical practices is key.

In looking for further resources and information on this matter be sure to check out the links below:

PBS The Side Effects of the Pill

NIH Half a century of the oral contraceptive pill

NIH How the Pill Became a Lifestyle Drug: The Pharmaceutical Industry and Birth Control in the United States Since 1960

Figuring the Population Explosion: Demography in the Mid-Twentieth Century