IMPORTANT: You are using an older version of Other that may not be supported in the future. Upgrade Now
UMBC is open. The physical campus is closed, but courses are now online and employees are working remotely.
Classic
Women's Center
Institutional Group • 1896 people
22

What You Need to Know About Native Activism

Get ready for Critical Social Justice: Rise with our What You Need to Know series. Written by Sheila Suarez.

Activism is the action of campaigning to cause social or political change, and it takes many forms of expression; physical action, artistic expression, and academic scholarship, to name a few. The Native people of the United States have their own strong activism history with the purpose of bettering the lives of those that are part of their community.

American Indian occupiers moments after their removal from Alcatraz Island on June 11, 1971. Photograph by Ilka Hartman.

Scholars consider the roots of modern Native activism begins with the Occupation of Alcatraz in 1969. The Occupation of Alcatraz was an action taken by 90 urban Native college students to occupy the island of Alcatraz. Those occupying the island demanded that the island be given back to the Native peoples of the San Francisco Bay area, eventually allowing them to create a college and culture center. After 19 months of occupying the island, the activists were forcibly removed by the United States government, but not before inspiring many others in tribal communities across the nation.

Native peoples’ activism has taken many forms since the Occupation of Alcatraz. The rise of Indigenous Peoples’ Day is a great example of this. Columbus Day, celebrated on the second Monday of October, ultimately commemorates the colonization of the Americas and the subsequent genocide of millions of indigenous lives. Indigenous Peoples’ Day was created in 1992 in Berkeley, California as an alternative to Columbus Day. Through the legal action of Native American leaders, this holiday is meant to be a celebration of the Native Peoples, their history, and their resilience. Slowly but surely, many different cities and townships have adopted the new holiday.

When thinking about Native activism, many may also look to the recent efforts to halt the Dakota Access Pipeline. The Standing Rock Sioux and the Cheyenne River Sioux were the first to oppose the construction of the Dakota Access Pipeline (DAPL). In addition to legal battles, there was an incredible presence on the ground; peaceful protest happened 24/7 throughout the spring, summer, fall, and winter of 2016. Native activists, like our keynote speaker Dr. Adrienne Keene, came together in solidarity with environmentalists and many others to challenge the construction of DAPL and educate other communities on how this 1,100 mile long oil pipeline could poison the drinking water of the Native peoples in Standing Rock and other communities that lived along its path. It was, however, not only the threat of environmental degradation but the continued exploitation of Native lands by the U.S. government and corporate interests that many opposed. As legal battles ensued, the peaceful protesting around construction sites swelled to thousands, and just so, North Dakota police began to use tear gas, rubber bullets, water spraying, dogs, and other violent tactics to suppress protesters. Unfortunately, in January 2017, President Trump signed an executive action to advance the construction of DAPL. Protesters continued to seek legal protection and stays, but were ultimately booted out by police in February of this year. 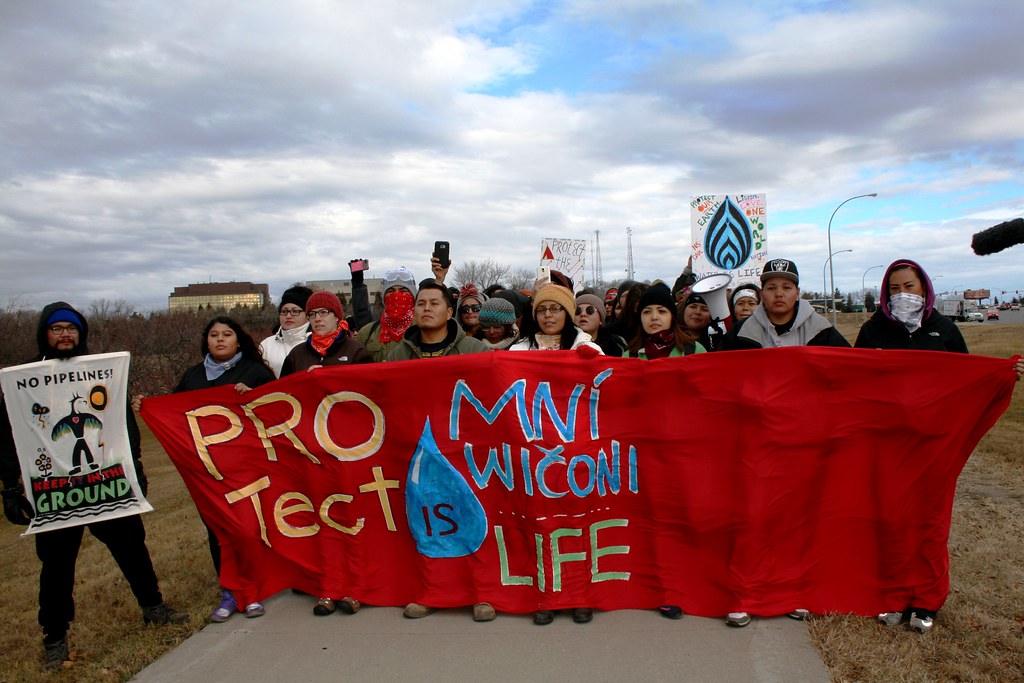 The history of Native activism is a lesson in resistance and resilience. As a group that has had to fight for their rights, culture, and land for hundreds of years, their sustained commitment is a testament to the strength and power of their people and communities. Although we have only touched the surface of this history, we look forward to learning more.

If you would like to learn more about Native activism, come hear Adrienne Keene speak about Native appropriations and Indigenous social media, Tuesday, October 24, 2017 in the UC Ballroom from 6:00 pm to 8:00 pm. In the mean time, take a look at Adrienne Keene’s blog, Native Appropriations, as well as her active Twitter feed @NativeApprops.