IMPORTANT: You are using an older version of Other that may not be supported in the future. Upgrade Now
Classic
Women's Center
Institutional Group • 2044 people
5

What You Need To Know About the Undocumented Immigrant Experience

Get ready for Critical Social Justice: Ignite with our What You Need to Know series. Written By Becca Mann, Mosaic Intern for Gender Equity, Social Justice, and Inclusion and Carlos Turcios, Coordinator for Student Diversity and Inclusion in Campus Life.

The term undocumented immigrant relates to a foreign-born person who is currently living in another country without legal authorization, whereas unauthorized migration relates to the action of moving to another country through means outside of what is permissible by that government. To most living in the United States, these definitions are not new. Although immigration to the new world began since the inception of the United States, the concept of “illegality” was something created in the late 19th century.  For each era of immigration, representation in the media clearly depicted imagery suggesting how immigrants looked like, the languages they spoke, why they were here, and how it affected the livelihood of Americans of that time.

In 2014, the majority of undocumented immigrants residing in the United States came from Mexico, Guatemala, El Salvador, Honduras and China. Forty percent have less than a high school degree and about half have very limited to no English language skills. (Migration Policy Institute, 2014). Foreign policy, poverty, violence and civic unrest in their countries of origin are just some of the reasons why immigrants leave to the United States.

The truth is immigration policies have always been convoluted to understand. Immigration policies have continuously expanded throughout the different waves of immigration that have created “gaps” to those who fall within “gray areas”.  These complications on determining the statuses of immigrants have led to recent executive decisions such as the Deferred Action for Childhood Arrivals (DACA) and Temporary Protected Status (TPS) for various countries. More recent legislative decisions (i.e. attempts at terminating DACA and TPS), have affected general societal attitudes toward immigrants, especially the undocumented immigrant population.

Despite immigration being a common topic during election seasons, rarely do English-only speakers get a preview of what underlies in the experiences of the people living with this identity. Different nationalities, time of entry, age groups and socioeconomic statuses are only some factors that drastically affect the lived experiences of immigrants in the United States.

So you’re probably asking yourself “what can I do to help?” Below are some suggestions on what you could do to be a better ally:

Use the term “undocumented immigrant” instead of “illegal immigrant.” Undocumented immigrants are simply that, they don’t have official papers to be in the country where they are currently residing. Labeling them “illegal” is viewing their action of immigrating as an attack, suggesting their human existence is unlawful. In reality, being an undocumented immigrant is a violation of a civic law and not considered a federal crime.

Educate yourself on the U.S. immigration processes. Most people accuse undocumented immigrants of “skipping the line”and they just need to wait to live here legally. However, the official ways to legally enter this country have not changed since the Immigration Act of 1965 and sometimes this “line”does not exist for certain people. For those who have a line, the wait may be too long that it endangers their livelihood.

Stop assuming that immigrants “look a certain way.” Although statistics do show that the majority of immigrants come from Mexico and Central America, that does not mean that people from other regions can not hold this identity. Likewise, the nationality does not assume race and people can look very different regardless of where they are from. Be conscious of the diversity within the immigrant community.

There are ways to support immigrants and get involved! 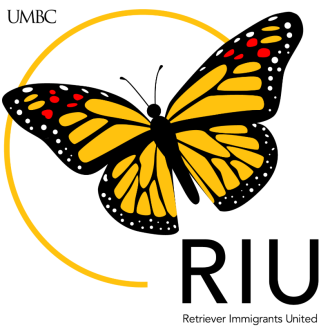 Retriever Immigrants United, or RIU for short, is a brand new student organization on campus this semester. This org focuses on community building, education, and empowerment. The mission of this group is to provide a space for all statuses of immigrants (e.g. undocumented, DACA, Temporary Protective Status, first generation, second generation) and allies to provide support and share resources.

You can find Retriever Immigrants United on myumbc and Facebook. Also you can contact retrieverimmigrantsunited@umbc.edu with any questions or more information.

The Mosaic myumbc page also has a folder under the “Files” tab with a lot of helpful information.

To learn more, come to our event “CSJ Igniting Consciousness Into the Immigrant Experience” on Wednesday, October 24 from 5:30-7 pm in Commons Skylight.

October 24 is also “I Stand With Immigrants Day of Action.” Please join RIU for their event in recognition of this day from 12 p.m. – 1 p.m. in the Commons Breezeway.