IMPORTANT: You are using an older version of Other that may not be supported in the future. Upgrade Now
Classic
Campus Life's Mosaic, Interfaith, and Pride Centers
Institutional Group • 1056 people
IMPORTANT 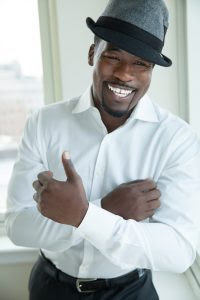 $15 General Admission and $10 Student and Seniors

Present day. A slave ship emerges out of the Hudson River in front of the Statue of Liberty sending NYC into a frenzy. Emergency is an intricately woven, urgent, witty and moving exploration of our shared humanity and what it means to be free. An explosive play where rhythm, rhyme and remembrance rise.

Daniel Beaty is an award-winning actor, singer, writer, and community activist. He is the co-writer and lead actor of the upcoming feature film Chapter & Verse with Loretta Devine and Omari Hardwick about a man who re-integrates into society after eight years in prison. His critically acclaimed plays Through the Night, Emergency, Mr. Joy, Breath & Imagination, and The Tallest Tree in the Forest – Paul Robeson, have been produced at leading theaters across the nation and venues ranging from Lincoln Center to the White House, garnering numerous awards including an Obie award for writing and performance and three NAACP Theatre Awards. A highly requested keynote speaker, Beaty has spoken throughout the U.S., Europe, and Africa.

This engagement of Daniel Beaty is funded through the Mid Atlantic Tours program of Mid Atlantic Arts Foundation with support from the National Endowment for the Arts. This event is also sponsored in part by funds from CIRCA, UMBC’s Center for Research, Innovation and Creativity in the Arts.

Get Tickets Add to Calendar